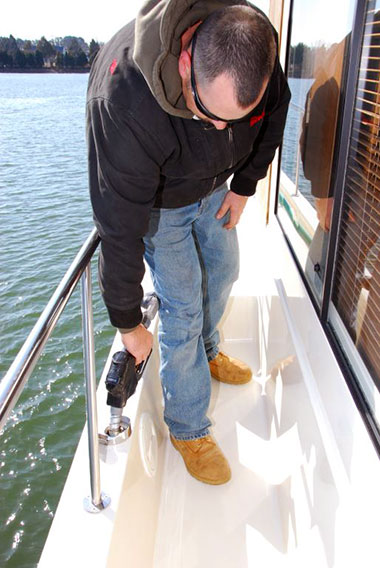 The fuel you get should be “on spec,” meeting ASTM standards, but random testing indicates that may not always be the case. Even where it is on spec, refiner and engine manufacturer lubricity standards differ.

Lately, there’s been a lot of publicity, some would say hype, about diesel fuel’s lubricity—its slipperiness component. Worry about the decrease in sulfur mandated for on-road diesel, which began in 2007, has grown. At that time, most on-road diesel had to meet a 15-parts-per-million standard (lowered from 500 ppm). Myth buster fuel factoid number 2 (number 1 is that most biological fuel contamination is bacteria, not algae): sulfur is not a lubricant. I cringe whenever I read or hear from a self-styled expert or salesman that it is. The fact is hydro-treating—the process by which sulfur is removed from diesel fuel using steam—collaterally reduces diesel fuel’s lubricity as well. Engineers who spec fuel quality and operate refineries are well aware of this issue, and they follow protocols to deal with decreased lubricity by adding lubricity agents (often a little biodiesel, typically 1% or less) at the fuel “rack,” where fuel is dispensed.

Herein lies the problem: mistakes can happen when it comes time to add these agents. In fact, according to Power Service, www.powerservice.com, an additive manufacturer that operates its own testing lab, “approximately 40% of the ‘ready for sale’ fuels obtained in North America during 2010 did not meet the 520 HFRR [I’ll explain what that means in a moment] maximum specifications when tested at Power Service’s lab (81 of 202 samples).” Fifty-six of the samples exhibited an average wear scar of 624. To clarify, the 15-ppm requirement for on-road diesel does not apply to fuel purchased off road, i.e., for use in boats. However, most fuel distributors are unable or unwilling to stock and distribute low sulfur, 500-ppm, and ultra-low sulfur, 15-ppm, diesel. Therefore, ULSD is likely being shipped to many off-road retailers, including fuel docks. 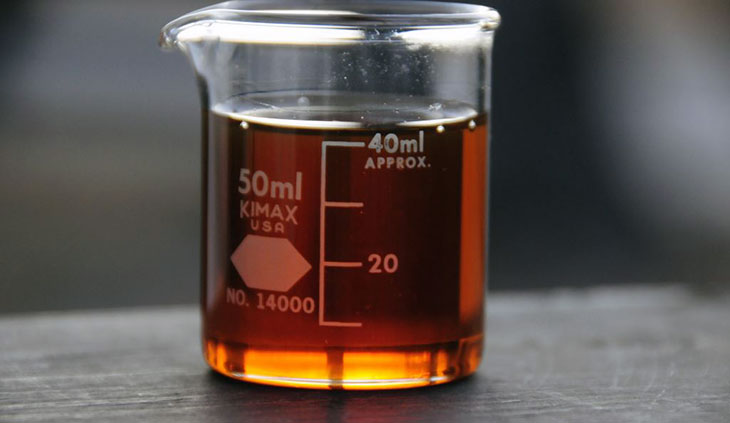 By appearance alone, it’s impossible to determine an additive’s effectiveness. Without lab and/or dynamometer testing, all observations are anecdotal.

Lubricity is important because of the fine tolerances of the components within the fuel-injection system, some of which are measured in ten-thousandths of an inch. If the fuel’s lubricity is too low, improper lubrication will shorten the service life of fuel injectors and high-pressure pumps. They will essentially grind themselves to death. Insidiously, this failure typically displays no outward symptoms; the engine runs just fine, there’s no smoke or knocking, and fuel economy remains normal until the engine becomes difficult to start or the injection pump fails, by which time the damage is done.

HFRR and What It Means

Diesel fuel sold within the U.S. is required, technically, to meet an ASTM standard, D975, which as of 2005 includes a lubricity component. The lubricity is measured using a device called a high frequency reciprocating rig (HFRR). This testing tool places a load on a bearing for 90 minutes, using fuel as the lubricant. After the test is complete, the size of the wear “scars” on the bearing is measured. The ASTM standard limits the size of such scars to 520 microns. A micron is a millionth of a meter, but considering the duration of the test, just 90 minutes, it’s telling (the larger the scar, the poorer the lubricity). If the fuel meets that standard, all should be well—sort of. You see, some engine and fuel-injection-system manufacturers don’t believe the rating is conservative enough. John Deere, for instance, calls for fuel that is slipperier, making smaller—450-micron or smaller—wear scars, which would require the use of a lubricity additive to lower the HFRR number. Interestingly, an HFRR of 460 is in line with the European standard for diesel fuel, EN590. The Europeans run a lot of diesel-powered automobiles and trucks (60% of their passenger cars are diesel-powered), and thus, in my opinion, this tack is worth our attention. And, as was detailed above, it’s possible that some fuel may indeed not meet the minimum 520 requirement at the pump. 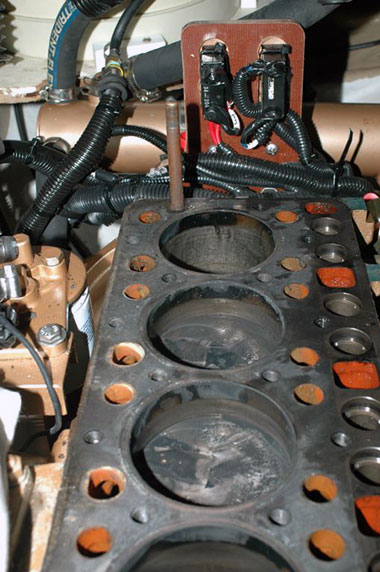 Additives that make wild, or too many, claims—often referred to as “mechanic in a can (or bottle)”—should be approached with deep skepticism. No additive can fix worn rings, out-of-adjustment valves, or leaking injectors.

I posed the question of lubricity-spec fuel to a colleague, Rick Chapman. My fuel answer man for some time, he recently retired from BP as a Senior Quality Product Advisor after 30 years, and now he’s Industry Liaison Manager for Innospec, www.innospecinc.com, the largest dedicated fuel-additive manufacturer in the world. He said, “Because ASTM D 975 Standard Specification for Diesel Fuel requires that diesel fuel meet a minimum lubricity of 520 microns HFRR, every gallon of diesel fuel sold in the United States theoretically gets the proper amount of lubricity additive put in at the terminal rack. However, lubricity is typically not monitored at the terminal (or only in an “after the fact” way) and things can go wrong once in a while. If a customer feels that they want to have extra protection, they can always add more. Synthetic, non-acid type lubricity improvers are preferred because they prevent interactions with other additives or contaminants which may cause filter plugging and fuel system deposits.”

Adding a lubricity improver is probably not a bad idea, particularly for high-pressure common rail engines, because, operating at 25,000–30,000 psi, they place a greater burden on fuel for lubrication of injection components.

To choose or recommend a lubricity improver, start by looking for data indicating that the additive manufacturer has tested fuel dosed at the recommended concentration with their additive using the HFRR. What is the wear-scar size or improvement when compared to untreated fuel? If the manufacturer hasn’t performed that test, confidence in the product’s ability to enhance lubricity would be in question.

Manufacturers and vendors of these products should be well versed about their content, and performance should be measurable, even if it’s not from an independent third-source lab, which is preferable. It’s too easy for manufacturers or distributors of additives to rely on anecdotal evidence; the familiar testimonials that heap praise on a product based on users’ experience, while valuable to a point, should serve only as an adjunct to solid, scientific lab results.

Among other things, lubricity improvers should never be used unless you have first determined their makeup. Does the additive contain an acid-based dimer, or monoacid-based lubricity enhancer? This type of lubricity agent, while effective at reducing wear, is also highly reactive when it comes into contact and combines with metal cations such as calcium and sodium, elements that are frequently found in fuel tank bottoms. Even if a vessel’s tanks are spotlessly clean, these contaminants can exist as residuals from the refining process, meaning they enter the tank with the fuel. Ultimately, this reaction forms what the industry refers to as “soaps,” which, as the name implies, is a waxy, viscous deposit capable of clogging filters and causing injection system deposits. Also, if the additive performs other functions, such as mitigation of water, ensure that it is alcohol-free. Most diesel engine and fuel-injection-system manufacturers prohibit the use of additives containing alcohol.

Ideally, the lubricity improver you choose or recommend to your customers will be recommended, or at least approved, by the engine (and generator) manufacturer. Engine manufacturers who recommend lubricity improvers know that users will likely include those with brand new engines, which are under warranty. They have a strong incentive to provide or approve a product that will extend the life of the injection system components and avoid filter clogging or deposit of substances within the fuel system, all of which generate undesirable warranty claims. 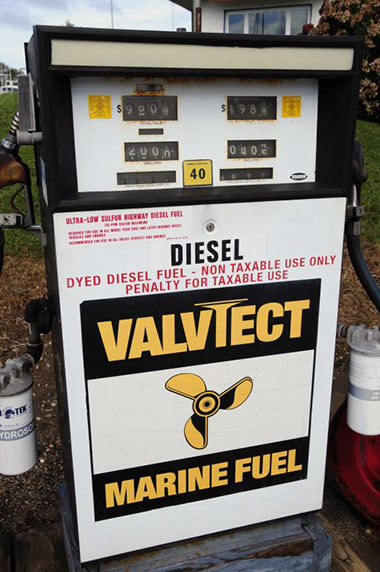 The (perceived) need for an additive can be mitigated by using known, clean, water-free, on-spec diesel fuel.

Recommend that vessel owners and crews obtain fuel from a source that guarantees its fuel’s lubricity; one such retailer is ValvTect. From my several interviews with ValvTect on a variety of fuel-related subjects, including lubricity, I’m happy to report that they carry out HFRR tests on the additives used to formulate their ValvTect Marine Diesel Fuel and guarantee that their marine-grade diesel and additive exceeds, at the very least, the ASTM 520-micron wear-scar requirement used by refiners for commercial-grade ULSD fuel.

The bottom line on lubricity improvers is they make good sense and are affordable insurance considering how costly damage from fuel that lacks proper lubricity can be.

While roughly analogous to gasoline’s octane, the effects of cetane on the combustion process are just the opposite. Octane retards the combustion process, encouraging gasoline to burn rather than explode (this is why higher octane gasoline reduces knocking—the knocks are small explosions inside the cylinder), and cetane makes diesel fuel more likely to ignite. Because diesel fuel relies on heat generated by the compression of air within the cylinder to ignite the fuel, encouraging this process with higher cetane—thereby minimizing the delay between the moment the fuel is injected into the cylinder and the point at which it begins producing power—makes starting easier, reduces smoke, and generally improves engine performance. Additionally, higher cetane content can reduce engine noise as well as formation of crankcase oil sludge and combustion chamber soot.

Cetane content, expressed as a number often between 40 and 55, is one measure of a fuel’s ignition quality. Most diesel engines benefit from higher-cetane fuel; however, high-speed diesels stand to benefit the most because the rate at which their pistons move necessitates the quickest possible combustion process. All diesel engine manufacturers specify a minimum cetane requirement for their engine design. 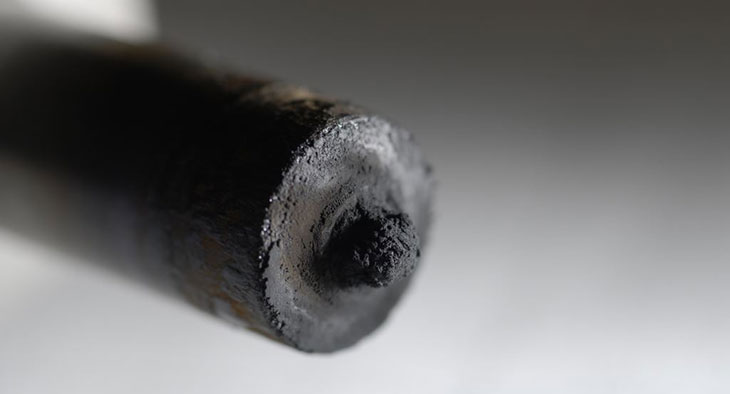 Fouled injectors can lead to hard or rough starting and smoking. While many additives claim to clean such deposits, in the author’s experience no additive can be counted upon to do this, and there’s no substitute for injector removal, inspection, cleaning, and spray-pattern testing.

If it’s necessary to crank an engine for long periods (anything longer than about three seconds is too long) to attain self-sustaining combustion, and if the startup process is accompanied by billowing clouds of white smoke, shaking, and heavy vibration, then it may be worth trying a tank full of fuel doped with a cetane booster. Typically, cetane boosters will raise the cetane level by three to seven points. Most engine manufacturers call for a minimum of 40, and anything over 50 offers no additional performance enhancement or value.

Be aware, however, that as useful as it is, cetane booster isn’t a mechanic in a can. It won’t remedy valves that are out of adjustment, carbon-clogged piston rings, weak batteries, or undersized battery cables—all maladies that will produce the same or similar symptoms as low-cetane fuel. Before recommending that a vessel owner use a cetane booster to remedy one of these issues, make sure the engine is in proper working order.

Even if an engine is expertly maintained, or if it’s new, while it may not be necessary it will nearly always benefit from fuel whose cetane content is higher. Cetane levels of fuel sold at fuel docks are often either 40 or 45. Given the option, the 45 is likely worth the slightly higher price. Otherwise, recommend that your clients buy the cleanest fuel they can get, and if they are willing, use a cetane and lubricity improver to obtain the fuel economy, starting, longevity, and running-characteristic benefits it provides.

About the Author: For many years a full-service yard manager, Steve now works with boat builders and owners and others in the industry as Steve D’Antonio Marine Consulting. He is an ABYC-certified Master Technician, and sits on that organization’s Engine and Transmission and Hull and Piping Project Technical Committees. He’s also the technical editor of Professional BoatBuilder.