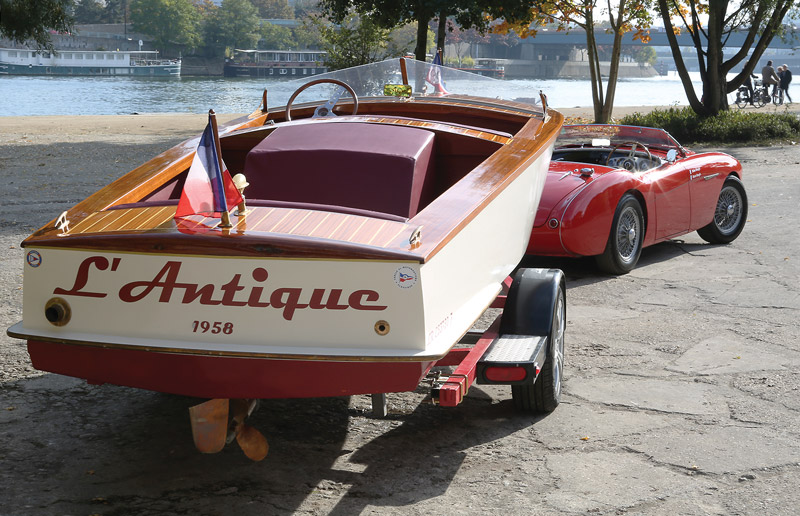 Highly concerned with the quality of production, Donald Healey chose the best materials and parts for his cars and boats, even having his boat trailers made specially for him. The Austin Healey 100 BN1 could reach 100 mph (160 kmh); not quite as fast, the Healey 55 Sport Boat was still a respectable speedster with its 1500-cc engine.

In 1952, the Austin Healey 100 BN1 became an archetypal British roadster of the postwar era. A few years later, Donald Healey, who was also a keen water skier, dashed into a motorboat-building venture, thus becoming one of the very few car manufacturers to promote a boat under his own name and brand.

Born in 1898, Healey was to establish himself as an engineer, driver, and manufacturer. He apprenticed at the Sopwith aircraft factory, joined the Royal Flying Corps in 1916, and took part in night bombing raids over enemy territory. He later studied engineering and then opened a garage and a car rental business in the early 1920s, but disliked what he felt was a boring life and soon started tuning cars for racing. Healy competed in his first Monte Carlo Rally in 1929 at the wheel of a Triumph 7 and won the event in 1931 in an Invicta 4.5 liter. Shortly after this success, he sold his business to join the Riley car company before moving to Triumph in Coventry, where he was appointed technical manager in charge of developing new models, among them the Southern Cross and the Dolomite. At the wheel of a Gloria that he helped design, he finished third in the Monte Carlo Rally in 1934. During World War II, he worked again in aviation.

Immediately after the war, he incorporated his own company, Don­­ald Healey Motor Co., and settled in a former shed of the RAF in Warwick. Innovative and very business savvy, he was one the first Europeans to foresee the large demand for British sports cars in the U.S. market. He created Nash-Healey, an Anglo-American assembly with Italian bodywork by Pininfarina.

In 1951, Healey began an audacious partnership with Austin, and at the London Car Show of 1952 unveiled his BN1 Roadster, capable of crossing the 100-mph (161-kmh) barrier. The factory soon entered cars in famous endurance races and rallies, beating world speed records on the salt lakes of Utah.

While very busy keeping his automobile business growing, the athletic Healey did not forget his lifelong love for watersports. Invented in the U.S. as the ultimate outdoor recreation, waterskiing was coming into fashion in the mid-1950s. The story goes that during some short vacations in the Bahamas to relax just after a car race, Healey and his good friend Stirling Moss, a champion driver, took up waterskiing and decided to design and manufacture a boat for the sport. Cornish yacht designer Geoffrey Lord set to work on drawings and commissioned the Pymore Mills boatyard of Bridport, Dorset, to build it in wood. In 1956, at the London Boat Show, the newly formed company Healey Marine unveiled its first model of sports runabouts, a 16-footer (4.9m), propelled by a BMC Series B 1500-cc four-cylinder gasoline engine.

Healey pushed his business machine full steam ahead, using the growing success of his cars to help promote his new marine venture. Moss helped by posing and smiling at the wheel of the boat for the press. Soon, a full range of boats was designed to suit the market of the time.

Moss took one of the first Healey Marine 55s to the Bahamas for waterskiing but hit a coral reef. The boat was sinking, but the champion wrote later: “As every good captain, I stayed with my sinking ship until the end….” The water was blue and warm, and Moss’s boat was easily salvaged.

In 1956, the Ski-Master, a 14‘6“ (4.4m) dinghy designed for a 30-bhp outboard engine, was introduced. In 1957 Healey launched the second edition of the Healey Sports Boat 55, slightly shorter than the original edition but again, like the first version, very carefully built from wood, with the keel and frames in solid mahogany, the side and bottom planking in marine plywood, and the deck planked with teak panels. A major move was switching to a fiberglass hull but with a wooden deck for the Healey Marine 75, unveiled in 1958, powered by a twin-carburetor BMC 1600-cc delivering 80 bhp at 5,800 rpm.

Ads proclaimed: “As thrilling on the water as the famous Healey sports car… it is built in the tradition of the fabulous world record breaking Healey Sports Car and is every bit as good as it looks.” 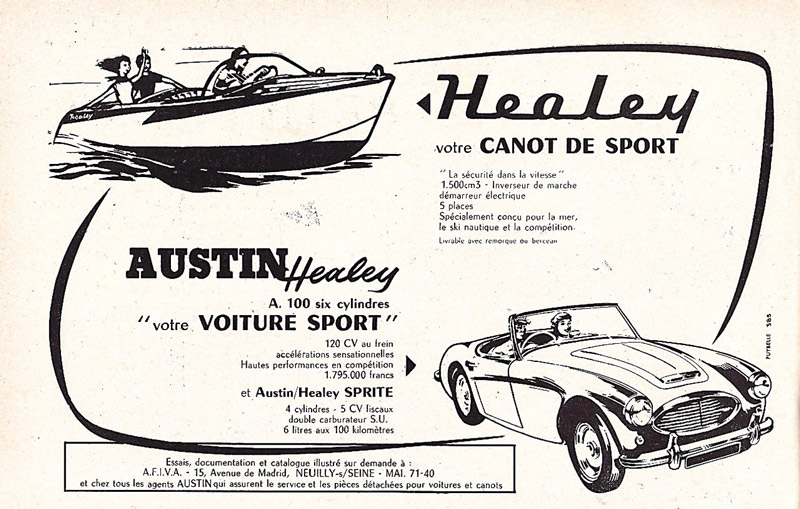 This ad, dated 1958, shows how much Donald Healey believed in his boating business, putting all his racing and car-manufacturing reputation into the game.

Healey decided to integrate the boatbuilding venture into his auto facility at Warwick, convinced that his boats would enjoy the same success in the U.S. as his cars did. Worried about the slightest detail, he had boat trailers specially designed and made, bearing AH hubcaps. In 1960, the release of the Healey Sprite boat closely followed introduction of the eponymous car model: “The combination of the Healey Sprite car and boat will bring exceptional and affordable enjoyment to young American people.”

Land-speed record holder Donald Campbell lent his name to another new model, the Healey 707, powered by his roadster’s famous 6-cylinder engine coupled with a Dowty Marine jet drive. The idea was to capitalize on the notoriety of the famous Boeing 707 airliner, also making its debut. But with manufacturing costs rising and order books slim, to avoid sinking his healthy car business, Healey closed the marine division in 1961, after having delivered more than a thousand units. Of course, the surviving boats are today much-sought-after collectibles in Europe and in the U.S.