This article is a companion piece to, and continuation of the research into, morphing hulls the author and aerospace engineer Charles Palamé introduced in the print edition of Professional BoatBuilder No. 173. His feature, “Shape Shifters,” includes discussions of sailing prototypes and the analysis performed by Farr Yacht Design into the performance of an adjustable-deadrise powerboat hull.

A standup paddleboard with a hull that changes shape while on the water to accommodate different water conditions or rider ability.

As a further application and to explore the commercial prospects of the morphing concept introduced in Professional BoatBuilder No. 173, I designed, built, and tested an adaptive hull stand-up paddleboard (ASUP). My intent was to develop an all-around board that performs well in a range of wind and water conditions and is suitable for paddlers of all skill levels. (This development was co-funded by Directed Energy, a NYSERDA-funded program of the University at Buffalo’s Office of Economic Development.) 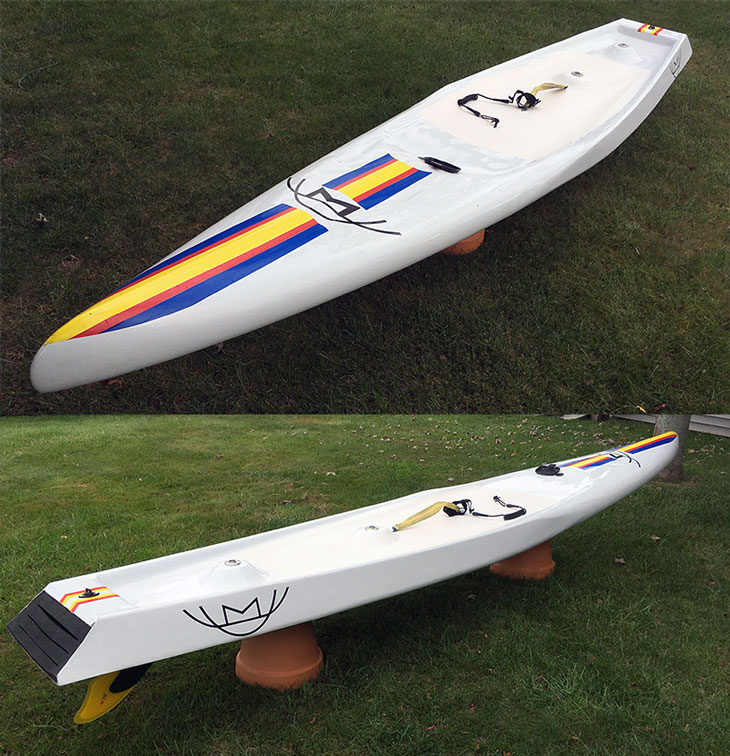 I studied the features of a range of paddleboards to understand what makes a specific design more or less suited for different uses and conditions. Uses included racing, touring, all-around family recreation, fishing, surfing, and yoga. Physical features assessed included length, beam, rail shape and location, volume and volume distribution, rocker, weight, and cost. I decided to focus on touring boards, with possible future applications to more elite racing boards. In both cases, paddlers are likely to encounter a variety of water and wind conditions.

Design objectives for an ASUP were the ability to:

It was clear from initial design studies that at least two design iterations would be necessary to develop a production configuration. The ASUP I’ll discuss here is the pre-prototype and a proof of concept. The key aspect is the ability to adjust hull shape and in so doing demonstrate operational benefits. Features such as adjustment mechanism or transom seal designs, material selections, and manufacturing methods could and, in most cases, would be modified for a next-phase production prototype.

Similarly, while finished board cost and weight are important considerations for an ASUP and were tracked throughout the development, they were secondary to demonstrating and validating the feasibility of the basic morphing concept.

Having established the desired physical morphing characteristics, I conducted an extensive series of tests and analytical studies to determine how they could be achieved and to quantify the specified feature changes. For example, basic shape and deflection were tested with simple aluminum-sheet sections and a 1/4 scale E-glass ASUP model created specifically to study methods of force application and their resulting effect on board shape. The 1/4 scale model was particularly useful in understanding the force/deflection characteristics. 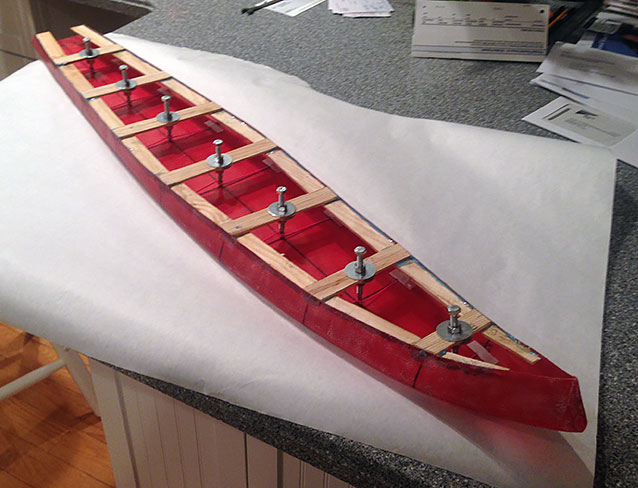 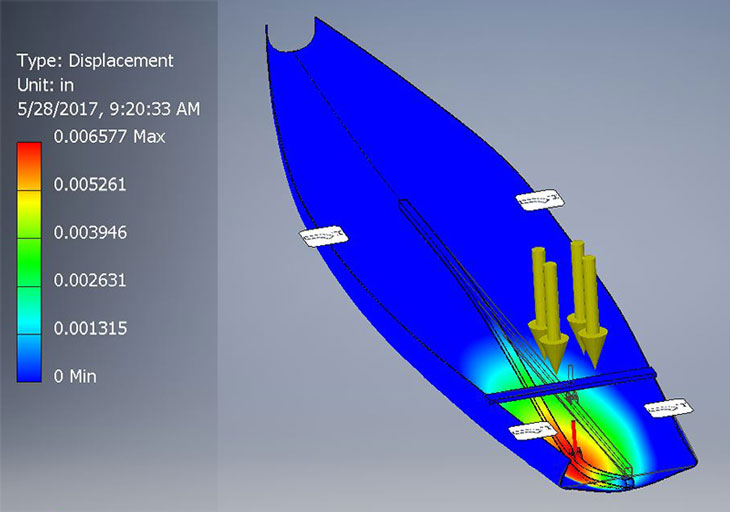 The full board design was established as a flexible shell, similar to that of the small model, bonded to a base board and equipped with a central beam to effect the shape change, and a flexible transom to accommodate the hull shape changes. In the downwind (rougher water) configuration the shell rests against the base board, and for flatwater (minimum rocker) the shell is physically adjusted to the desired shape. 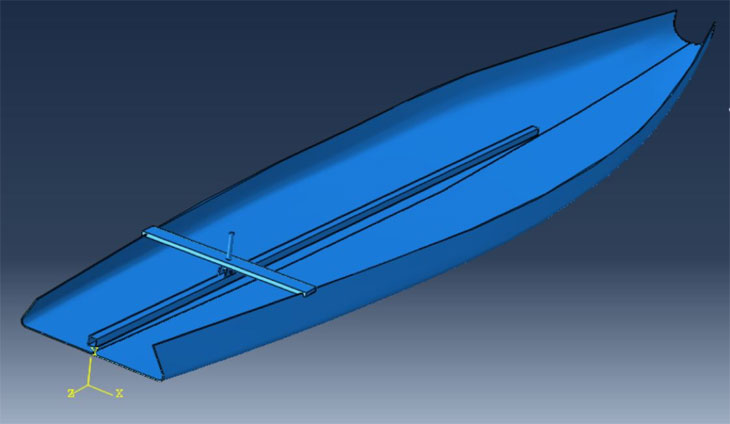 Figure 3a — Illustration of beam and shell.

The actuation mechanism for changing shell shape in this initial prototype consists of a pair of screw jacks actuated from the deck of the base board. 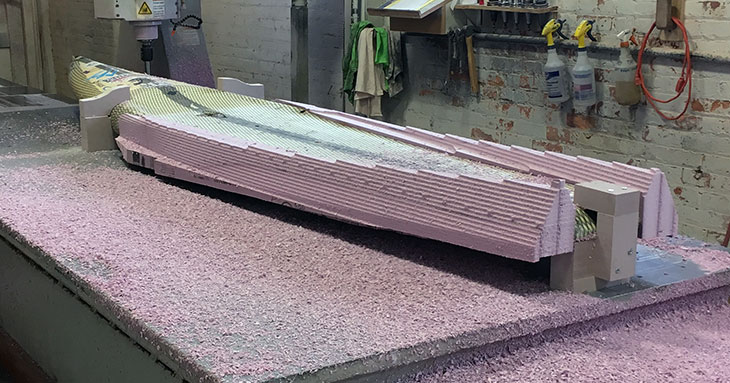 Figure 4—CNC machining of blank base board core. 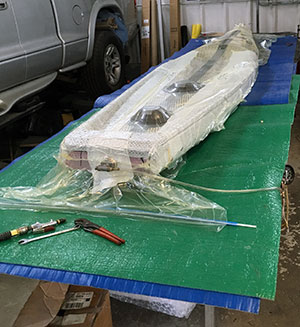 Figure 5 — Vacuum bagging the base board.

Materials subsystem elements I selected for the prototype included a composite sandwich design for the flexible shell using Kevlar 29 and uniaxial carbon fiber for the fiber reinforcement, with a bulk material (Soric) to complete the composite laminate. Fabric was oriented to favor the desired deflected shape profile. This selection was the result of a materials study with section testing to manage the deflected shape, remain within property allowables, and ensure that fatigue life and impact resistance are adequate. The PROSET 135/226 resin systems were selected for their structural and process characteristics—stiffness and durability for static sections and with post-temperature cure for the flexible sections, stiffness with high strain capability. The morphing transom was an elastomeric closed-cell foam bellows-style seal. And there was a commercial off-the-shelf high-performance Kevlar, carbon fiber, honeycomb core fin-bonded to a reinforced section of the outer surface of the shell. 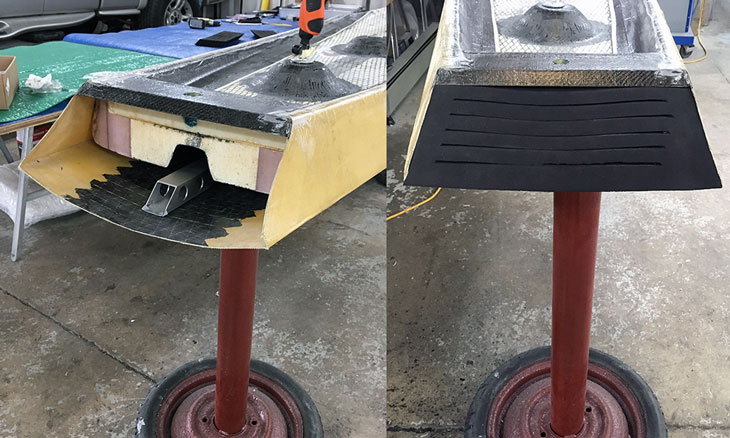 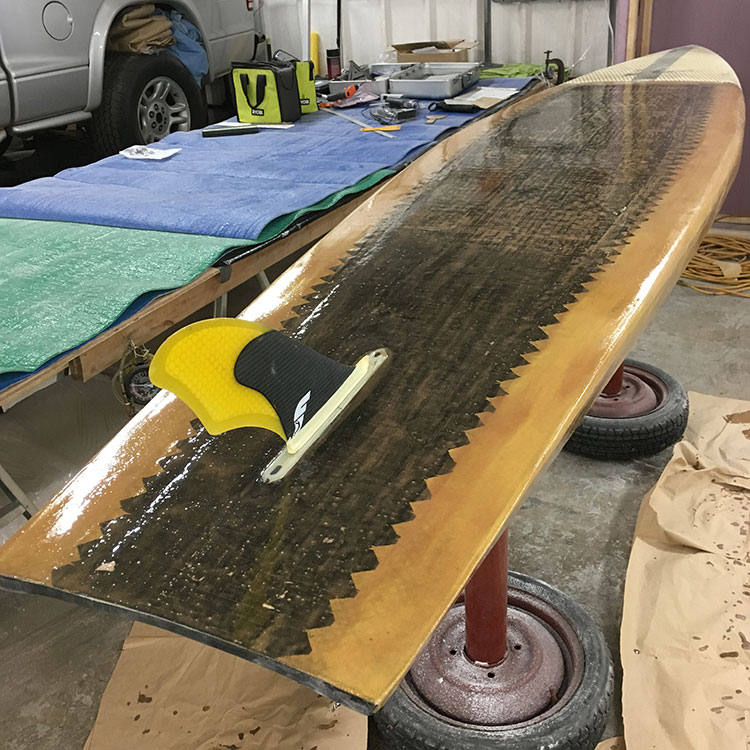 Major steps of the build:

The illustrations show that the objectives of adjusting rocker, altering rail shape, and, by changing hull shape, decreasing wetted area were achieved. While the board design and subsystem elements need some refinement, the prototype clearly demonstrates the practicability of adjusting hull shape to produce a paddleboard capable of efficient operation in a range of water conditions. 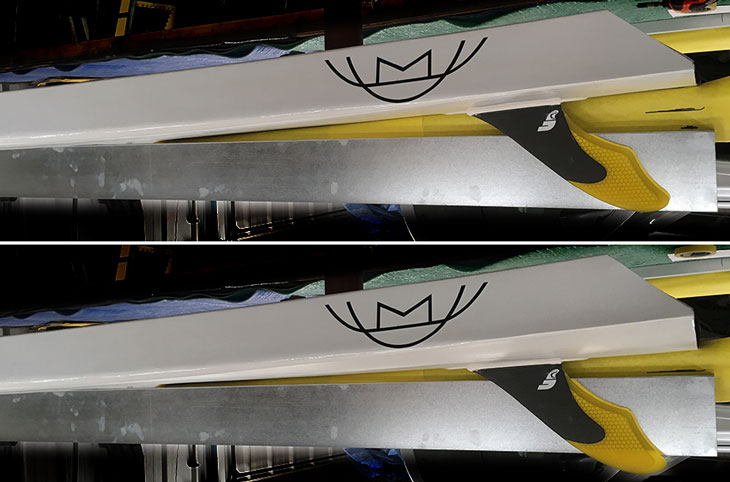 Figure 9—Illustration of rocker change as the board is morphed from the downwind to flat-water configuration. 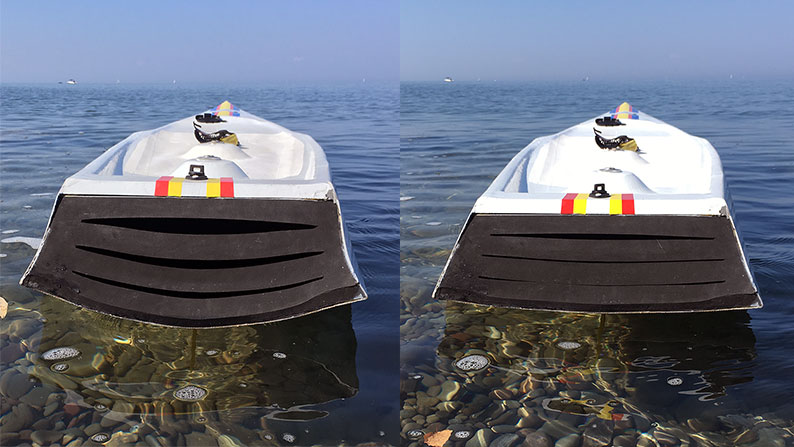 Stability Test Results: Roll (inclining) and pitch tests were conducted in a swimming pool as a convenient calm-water test location. Total displacements of 200 lbs and 165 lbs (90.7 kg and 74.8 kg), simulating the weight of a paddler, were set up using barbell weights. Fore-aft center of gravity was positioned 6’ (1.8m) forward of the transom. Weights were shifted laterally to induce a roll moment sufficient to have the gunwale close to the water surface. The 200 lb tests showed an 8% reduction in roll stiffness when the after section of the board’s bottom profile was made rounder and with 2.5” (63mm) less rocker, while at 165 lbs, there was a 9% reduction.

Pitching tests were conducted with moments of 78 ft-lb and 197 ft-lb (105.8 Nm and 267.1 Nm). No measurable change in pitch angle (+/–0.1 degree) was recorded. This was anticipated, as the rocker is reduced the aft end becomes narrower and rounder but it is immersed, providing stern buoyancy similar to the wider flat section with more rocker.

Operational Test Results: SUPs have numerous characteristics that novice and seasoned riders experience with often differing priorities. Roll stability is by far the first thing a novice rider will notice, whereas seasoned riders will sense more subtle qualities like acceleration during a paddle stroke and deceleration between paddle strokes. Additional SUP characteristics include how it reacts to oncoming waves, ease with which it is propelled by a following sea, ability to plane and stay on plane, paddling effort required to reach hull speed, resistance to beam wind, and its ability to exceed hull speed by paddling.

A number of experienced paddlers have tested the board in two ways: 1) blind, in that the paddler wasn’t told the configuration of the hull—wide or narrow—to ascertain if the difference was noticeable and if so, how the board felt; and 2) open, where the paddler had an understanding of the hull shape and why it was made, to determine if there were noticeable performance differences. Results and impressions from these tests follow:

In conclusion, all paddlers understood and were impressed and intrigued by the morphing concept. Results of the hull-change tests were somewhat subjective, but in all cases, paddlers were aware of the effect of the morphing and reported that the board’s unique ability to shape-change made it very interesting.

In any prototype or proof of concept development there are shortcomings or compromises necessitated by time, budget, and/or technical constraints, and this project was no exception. Lessons learned and changes for a subsequent prototype would include:

While significant in terms of effort, these changes can be accomplished (in many cases the redesigns exist), demonstrating the feasibility and value of an adaptive hull paddleboard. The exercise also demonstrates the value and potential of the morphing concept for yet another watercraft type.

About the Author: Charles Palamé built his first boat, a plywood Mini-Max hydroplane, in 1962. His interest in sailing and boat design never waned, and now retired from a career as an aerospace engineer he focuses on developing shape-changing hulls for sailboats, paddleboards, and powerboats. For more information, to comment, or to participate in their future development, contact Charles Palamé, Morph Marine LLC, Wilson, New York; cpalame@nullgmail.com; tel: 716–587–2572.