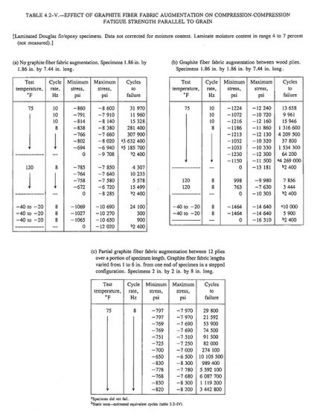 The two pages of compression-fatigue data shown here, along with secondary properties, represent the heart of an expensive, years-long study of lab samples and full-scale specimens—of wood/epoxy construction for composite wind blades. The samples and specimens were tested by several institutions, but prepared and/or built exclusively by Gougeon Brothers Inc., (aka GBI, Bay City, Michigan). The study itself was commissioned by the U.S. Department of Energy and conducted by the National Aeronautics and Space Administration. GBI cofounder Meade Gougeon planned to, in effect, decode these data for Professional BoatBuilder magazine; unfortunately, that plan was derailed by Meade’s untimely death last year. The backstory regarding this important database and our aborted article appears below.

GBI’s role in the NASA project was to prepare test specimens and full-scale prototypes (of wind blades, see below) for evaluation by additional entities, namely General Electric, ITT, and four American universities (Illinois, Dayton, Washington State, Lehigh). At the federal level, this research project was an interagency affair; meaning, NASA coordinated the work and reported on its results to the U.S. Department of Energy. As sponsor, DOE’s objective here was to determine the suitability, and viability, of large-scale laminated wood blades for electricity-generating wind turbines. The research program included testing the strength of an epoxy bond at a blade’s root, where threaded steel rods are potted into the laminated wood structure. (The resulting mean value of load exceeded the expected maximum load on a wind turbine blade by a factor of about 1.7.)

Though 1990 marked the release date of NASA’s report, research for it got under way in 1977–78, when modern wind turbines were in their infancy. GBI was a logical pick for DOE’s NASA study, given that the Gougeon brothers’ boatshop, established in 1969, made a name for itself building successful custom and production sail- and iceboats for racing, all featuring advanced, light-but-strong wood/epoxy construction. By 1983, GBI had evolved into an employee-owned company dedicated to developing epoxy resin systems and related accessories for composite boatbuilding and other applications in consumer and industrial markets.

According to NASA’s preface for its DOE reference publication, the book “contains a compilation of static and fatigue strength data. Most of the strength property data…are not found in the published literature.” Meade was principal author of the report’s 13-page second chapter, titled “Laminated Wood/Epoxy Composites in High-Performance Structures.”

Meade also authored GBI’s own technical manual, The Gougeon Brothers on Boat Construction, or TGBBC for short. Initially published in 1979, the manual refers to GBI’s participation in NASA’s research project but doesn’t exploit the study to hawk the company’s products. TGBBC grew in size during the course of five editions; the fifth carries the most generally available information to date on the DOE/NASA study.

(See “The Fifth Edition,” an archived article on here on this website, for PBB’s only review of TGBBC. Meade relegated an abbreviated description of the NASA report to one of the fifth edition’s six appendices, none of which our review discussed. Moreover, Meade did not list the NASA report in that edition’s selected bibliography.)

While Meade was pleased that NASA’s scientific research validated GBI’s wood/epoxy construction methods, he was disappointed with the report’s minimal dissemination. Almost a decade ago he urged PBB to publish an article about the NASA study, emphasizing the value of “wood as an engineering material”; my response to him was that he should write it. Every so often Meade, then retired, would phone me to present new details for the article, except he never started on a draft. By the time Meade agreed to a collaborative effort involving the two of us for a print or online piece, he was dealing with a difficult melanoma. It wasn’t until December 2015 that Meade mailed me a personal copy of the NASA book, containing the following handwritten note:

This publication contains the most complete fatigue database that exists on any wood. It cost many millions of dollars to produce and little has come of it other than our own knowledge.

The compression fatigue data along with the secondary properties is the most important part.

Will give you a call next week to get something going on the proposed article.

No one but Meade knew exactly what he planned to say for the PBB piece. He did, however, flag two pages in particular of the NASA report that best display the compression fatigue data referred to in his note above. We’ve reproduced those pages above.

You can order The Gougeon Brothers on Boat Construction from The WoodenBoat Store, as well as download a PDF of the book at no charge.