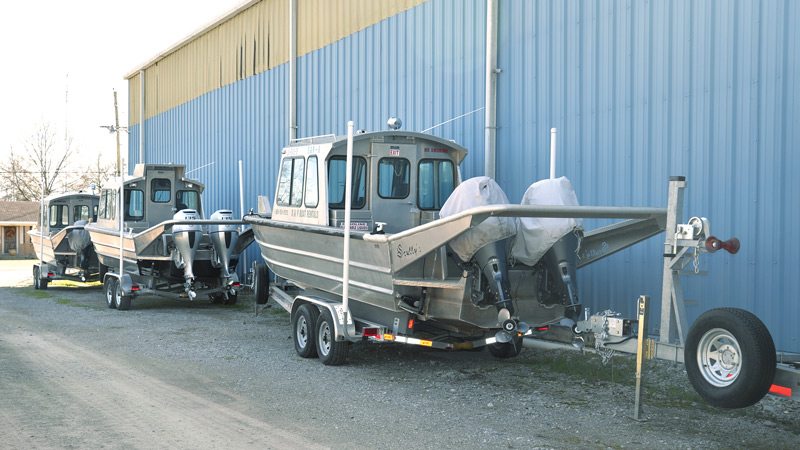 With the downturn in oil and gas work, Scully’s Aluminum Boats is presently building 24‘ (7.3m) workboats on spec, finishing them to customers’ orders.

That’s the message I got loud and clear from visiting several yards along the Gulf Coast between New Orleans and Lafayette earlier this year. And right now, it’s not so good.

Elwood Scully (“Mr. Elwood,” as some locals call him), who with son Shane has been running Scully’s Aluminum Boats in Morgan City since 1981, blames much of their misfortune on the wild fluctuations in oil prices. “It’s ridiculous to have prices from $50 to $100 a barrel,” he says. “Can you run a business with prices jumping like that?” He has a point. He thinks President Trump is doing some good things, including approval of the Keystone XL Pipeline that will transport crude oil from Alberta, Canada, and the U.S. to refineries on the U.S. Gulf Coast. “We need prices to stabilize,” Scully says firmly. 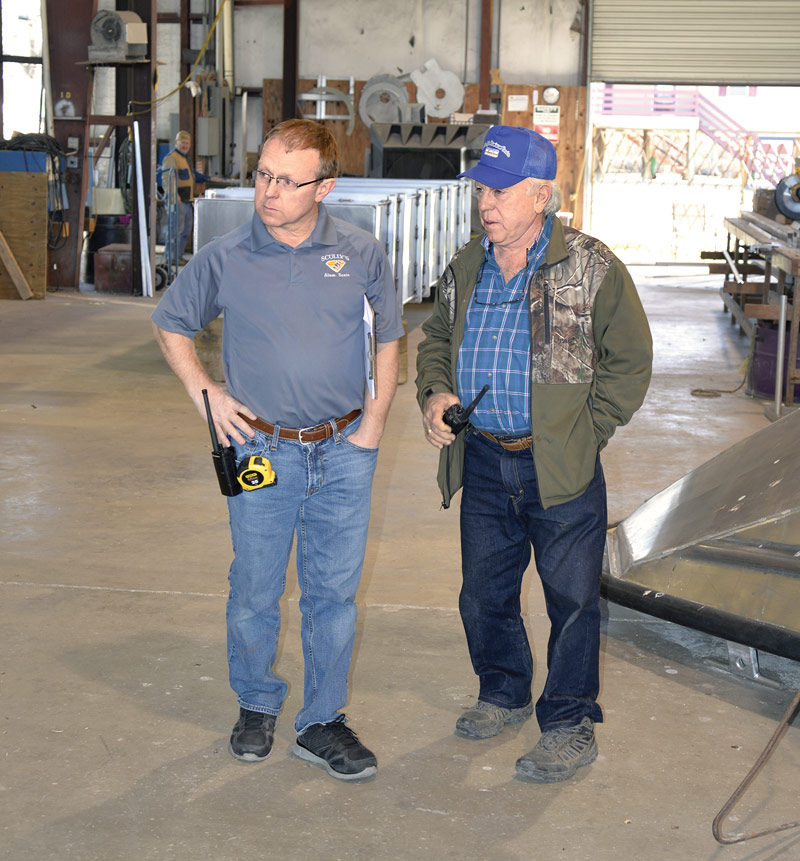 Shane Scully, left, and his father, Elwood, have been running their Morgan City, Louisiana, business since 1981.

Along the Louisiana Gulf Coast many if not most businesses depend on the extraction of oil and gas. In the early 20th century most of the wells were land based, but by the early 1970s, there were twice as many offshore drilling platforms and, as Scully points out, they cost twice as much to construct and maintain. They needed crew boats to supply them. Before 1971, when the U.S. Coast Guard mandated certification of these boats, Scully says shrimp boats were performing the necessary services.

You hear the word conversion a lot in Louisiana yards. As the price of oil has waxed and waned, shrimp boats were converted to crew boats, and crew boats were converted to yachts, ferries, dive boats, head boats, and dinner cruise boats. And sometimes back again. It keeps some, but not all, yards in business. When McDermott International closed its Morgan City facility in 2013, Scully says thousands of people lost their jobs, and the city’s population dropped by as many. (The U.S. Census Bureau reports a drop of 3,000 between 1990 and 2016.)

In a 2014 paper published by the University of Pittsburgh Press, author Craig E. Colton examined Louisiana’s dependence on the oil- and gas-extraction industry, stating that hurricanes Katrina and Rita in 2005 disrupted the state’s Gulf oil rig production and “interrupted the state’s vulnerable energy-extraction economy.… Ultimately, Louisiana, and particularly its petrochemical corridor and coastal parishes, experience dramatic economic turbulence tied to oil price fluctuations.” Texas crude was nearly $160 a barrel in June 2008, dove to $52 later that year, rebounded to $108 in 2011, and plummeted again to less than $30 by January 2016.

Scully’s survived a tough 2016, but without a full rebound in customers, they’re building 24‘ (7.3m) workboats on spec. Shane Scully says they’ll keep an inventory of 35 or 40. The hull is partly finished and then left to the buyer to configure the rest. “It can be a cabin boat, cruise, fish,” he says. “We build them as stock boats to a certain stage, and if I go too far, it never fails somebody wants something different.” Nearly all I saw are destined to be workboats, so they are fitted with push knees and an imposing motor guard. The yard’s website suggests they’ll build just about anything in aluminum: custom pleasure boats, workboats, oil spill boats, sectionals/barges, hydrographic survey boats, SOLAS boats, and USCG-certified boats. The company possesses a GSA contract number and isn’t afraid of government paperwork.

I toured the 28,000-sq-ft (2,604m2) facility with Crayke Windsor from the design firm Incat Crowther in nearby Lafayette (more on this company in a future issue). Shane Scully walked us into the shop, where the skiffs were in varying stages of completion. “We design, do all the calculations, and precut on the plasma,” he says. They do most of their design work in AutoCAD, cut parts on a 2D Haas vertical milling machine, and bend plates on a large press. They also have a seam welder, once useful for pontoon boats but not used much now. In a given series of, say, seven hulls, they’ll try to anticipate customer demand by building them with different angles of deadrise: three each with 14° and 18° and one with 20°, all with warped bottoms. 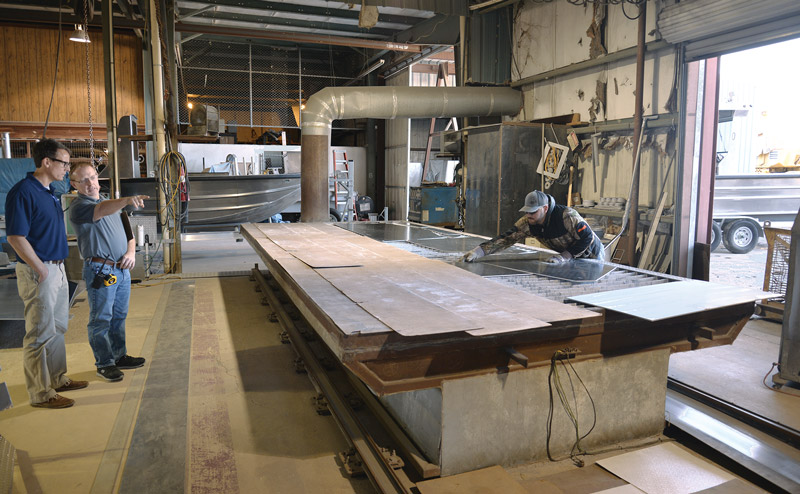 Crayke Windsor, left, from Incat Crowther listens to Shane Scully describe the workflow while a crew member positions a plate on the cutting table.

Windsor noticed that some chines were welded, and others bent (corrugated). Scully explained: “We could only corrugate 1⁄8“ [3mm] initially. Then we needed to corrugate 3⁄16“ [5mm]. That’s max. Even if we could corrugate ¼“ [6mm] plate, I would not want to pull on it—makes it super rigid and harder to put the boat together. So we must weld it.”

In addition, Scully’s does a variety of small jobs such as tanks for other builders or the framing for a cabin that sits by the door awaiting transport. And they’ve also built larger vessels: a 45–footer (13.7m) was their biggest production boat, and a 60‘ (18.3m) experimental boat with a rubber patch and electromagnets was designed to seal a “breached oil boat.” Due to size limitations, the conversion of a 125- footer (38m) had to be executed in another yard. Scully’s has access to the Gulf Intracoastal Waterway, enabling construction up to about 80‘ (24.4m). 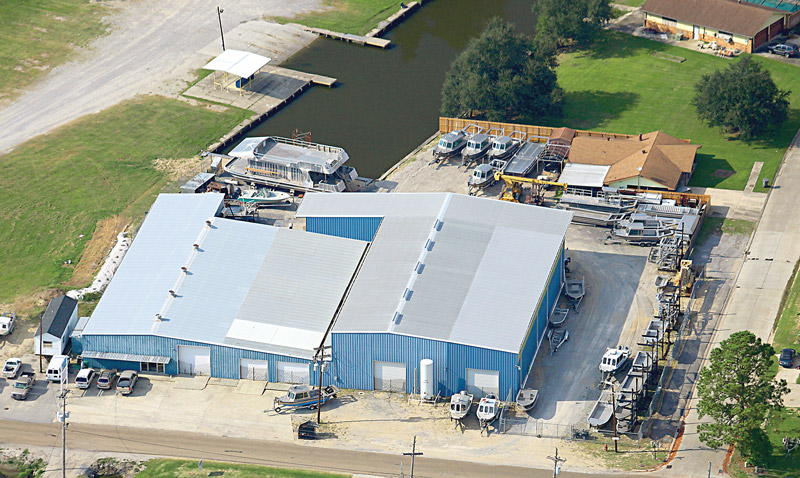 Scully’s has access to the Gulf Intracoastal Waterway, in Morgan City, Louisiana, a hub of metal boatbuilding highly dependent on oil- and gas-extraction industries.

There is a lot of untapped capacity at the yard right now, and they do their best to keep busy by diversifying into other markets and regions. Mr. Elwood says they’ve shipped boats to customers as far as the Great Lakes and West Coast, but none recently.

“We are depressed because of lack of oil field work,” says Mr. Elwood in his office, where a television on the opposite wall displays the price of oil on a ticker. “Sixty-four, seventy-five,” he observes. “Up a penny.” Settling back in his chair he says, “I think we reached the peak of our oil field days. I hope I’m wrong, but that’s what I see. So much fluctuation. Either adjust or get out of the business.”