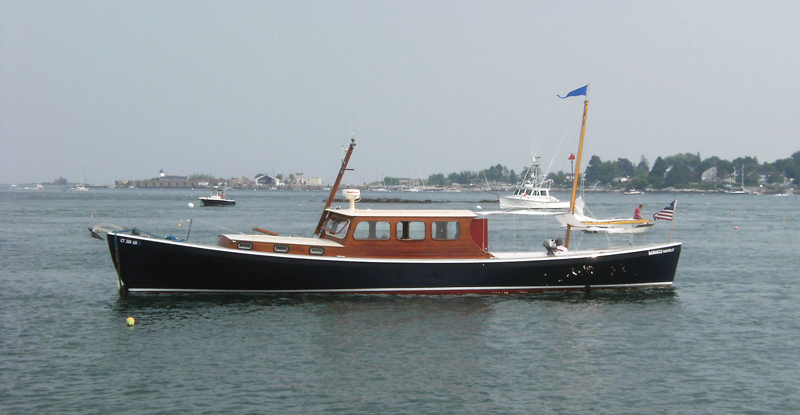 Noted in the last issue of PBB, in a Rovings item about Scully’s Boats in Morgan City, Louisiana, was the local economic predictor: “As oil goes, so goes Louisiana boatbuilding.” When the price of oil is high, there’s work to be had—nearly all are workboats in steel and aluminum. The effect at the pump is quite different: the higher the price of gas and diesel, the higher the demand for fuel-efficient recreational powerboats, and the less demand for the prevailing and abundant guzzlers. We’ve mused about consumer reactions before. Indeed, at the 2008 IBEX, three keynote speakers addressed the issue, with one surmising that a third of the boat-buying public will concede to slower speeds just to stay on the water; another third will quit boating altogether as too expensive; and the last third will continue to barrel along burning alarming amounts of fuel, willing to pay any price.

Once upon a time, in 1980, Boston-based naval architect Arthur Martin felt the pinch at the pump and developed his own solution. A graduate of the prestigious Webb Institute and collaborator of C. Raymond Hunt on such projects as the lovely Concordia yawl, Martin had taken to rowing for health and entertainment. Not surprising, as Herb McCormick reported in the inaugural issue of Trawler/Cruiser YACHT, a one-time sister publication to Cruising World, Martin also enjoyed cross-country skiing, and swimming laps in his 8‘ x 70‘ (2.4m x 21m) pool. Telling McCormick that he’d lost his enthusiasm for “sitting in the dark or cold, a drizzly rain running down my back, hoping for enough wind to get home,” he scaled up by a count of three times his Appledore rowing shell to create the teetotaling Energy 48 power cruiser.

Accommodations are restricted by the 8‘ beam but include the basics: double berth forward, wheelhouse with galley, and tight berth under the flush after deck (the fornicatorium, alluded to later in this column; that’s Martin’s term). Construction is wood/epoxy utilizing triple-planked ¾“ (19mm) western red cedar and ⅛“ (3mm) veneers of the same wood, saturated with WEST System epoxy and then sealed with a layer of fiberglass cloth. Displacement is 9,700 lbs (4,394 kg).

Propulsion is a 30-hp (22.5-kW) Westerbeke diesel with sail assist from an A-frame rig and roller-furler (since removed by a later owner in favor of a small mizzen). Fuel consumption is 3 quarts an hour at 10 knots; the 150-gal (154-l) tank equates to something approaching a 2,000-mile range.

You can learn more about Arthur Martin at www.new.arthuremartin.com, a website that affectionately recalls its subject as “the father of modern recreational rowing,” and includes the aforementioned three-page article in Trawler/Cruiser YACHT. With the passing of 36 years since its publication, it’s now safe to tell what really happened when editor George Day sent McCormick, photographer Sue Thorpe, and me to Kittery, Maine, to review the Energy 48. As this was the inaugural issue of the magazine (soon to be defunct), Day thought a cover photo of a crew tossing a line at the dockside camera would metaphorically invite readers aboard. Thorpe was stationed on the dock, Martin at the helm, and I was the line-tossing crew. There was a stiff current running, which required deft maneuvering on Martin’s part. We’d approach the dock obliquely, and as we drew close I tossed a heavy dockline at the photographer. Then we’d quickly veer off, I’d retrieve and coil my line, circle (the Energy 48 has a wide 100‘/30m turning radius), and try again. Managing depth of field was challenging for Thorpe. Our last attempt was painful. I tossed the dockline maybe 25‘ (7.6m) or so, which cleverly (to this day I still can’t believe it) belayed itself neatly around a cleat on the dock…just as Martin applied power to veer away. Crunch! The line came up short, tightened, and the dock punched a neat little hole in the bow. Just as we were recovering from the sudden stop, the rowing shell Martin was towing slammed into the stem of the double-ender transom, punching another near-identical hole. I can still see Martin’s anguished face peering through the wheelhouse window. We helped set things right, as well as we could, apologized profusely, and slunk out of town. I swear I could not toss a line securely around a cleat, even overlapping a horn, if I tried 100 times a day for the rest of my life.

Martin exhibited the boat at the 1980 New York Boat Show with an advertised price of $80,000. No orders were taken, and as far as I know, Martin’s hopes of semi-custom production never materialized. The trade-offs for fuel efficiency still seem to be a hard sell.