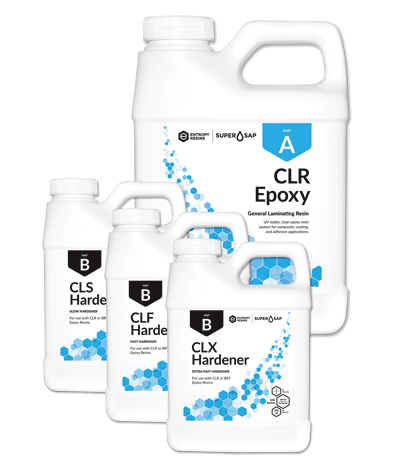 Clear Super Sap CLR Epoxy Resin, one of several Entropy products acquired by the makers of WEST System resins, is available with slow- and fast-curing times. A 2-quart-epoxy/1-quart-hardener kit retails for $95.50.

The maker of WEST System and PRO-SET epoxy resins announced last January that it had acquired Entropy Resins of Hayward, California, a leader in bio-based renewable resins.

Gougeon Brothers Inc. (GBI) CEO Alan Gurski says that he and Entropy CEO Desi Banatao saw each other annually at trade shows and chatted, eventually realizing they had much in common. Not only was each company founded by a set of brothers, they also shared a commitment to sustainability, environmentally sound products, and professionally run businesses. Small talk over the years about partnering eventually grew serious, resulting in GBI’s purchase. Gurski told Professional BoatBuilder that all Entropy operations have been moved to its facilities in Michigan. Desi Banatao has stayed on, while brother Rey continues to manage their separate sister company, Connora Technologies.

As it was boatbuilding that led the Gougeon Brothers—Meade, Jan, and Joel—to the search for a better glue and ultimately epoxy back in the 1960s, the Banatao brothers, in Southern California, were similarly engaged in surfboards and other water toys. The Entropy product line reflects those interests. Super Sap CLR Epoxy Resin is billed as a high-performance coating system that is clear, resistant to yellowing, and works well over high colors of fiberglass and carbon. Available in fast- (21-minute pot life, 4-hour tackfree time) and slow-cure speeds with twice the time (43-minute pot life, 8-hour tackfree time), it’s also suitable for laminating and repairs. A 2-quart epoxy/1-quart hardener kit sells for $95.50. Other products include bio-based resins engineered for compression molding, casting, embedding, and high-build coatings.

Gurski: “The Entropy Resins brand is a perfect fit for Gougeon Brothers, as we share the same commitment to product quality and customer support, as well as foundational business values. Entropy Resins’ focus on the use of sustainable bio-based materials and the quantification of environmental benefits through practices such as Life Cycle Analysis prepares our company for what is going to be a huge issue for the composites industry of the future. Entropy Resins also brings new composite processing expertise to GBI, namely compression molding, as well as new applications such as epoxy casting and potting. Lastly, this acquisition strengthens our relationship with Connora Technologies (co-founded by Entropy’s founders, Desi and Rey Benatao) and their groundbreaking Recyclamine technology, which solves the end-of-life and waste-generation issues around composites through a low-energy, solution-based recycling process.”

Recyclamine hardeners allow products made with thermosetting resins to be “dissolved” with a proprietary chemical solution so that the product—such as the snowboards made by Niche—can be recycled as another new product, be it a snowboard or surfboard.