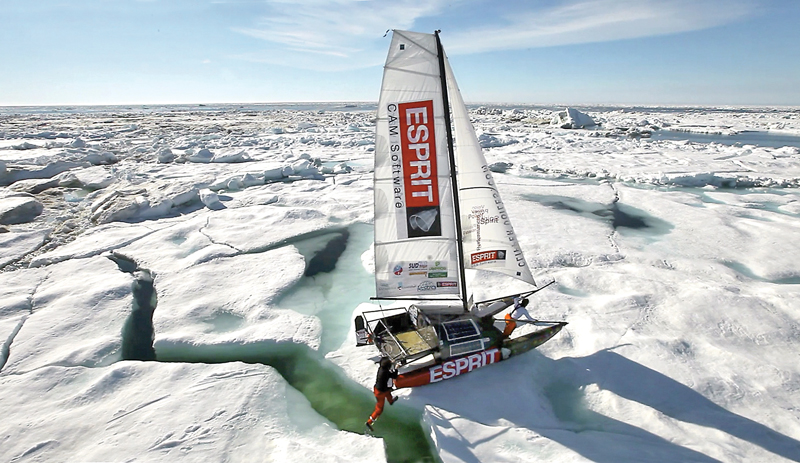 In conjunction with French composites manufacturer Resoltech, adventurer Sébastien Roubinet developed a boat that can sail on ice. An earlier prototype is shown here in trials traversing the Northwest Passage in 2013.

The number of records for exploring our water-covered planet is limited only by one’s wild imagination…first to sail solo nonstop around the world, first to do the deed the “wrong way,” first to row across an ocean, and now, first to sail to the North Pole. It has been 109 years since Robert Peary, accompanied by Matthew Henson and four Inuit women, claimed to have reached the celebrated point (the wobbling of Earth’s axis makes a precise fix uncertain), or was it Frederick Cook a year earlier?

No matter; neither employed a sail. 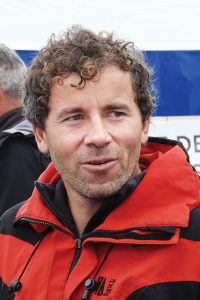 In his quest to sail to the North Pole, Roubinet has built a succession of boats designed and engineered specifically for this challenge.

For sailing on ice, the boat rides on two slides made of carbon/Innegra/basalt, and Resoltech 1020, engineered for flexibility and elongation. The skins of the pneumatic hulls were laminated with Innegra and basalt fibers, using 1600/1606 epoxy. The hulls must be able to withstand significant impacts as they bounce over cracks and sharp ice features, as well as changes in inflation pressure. 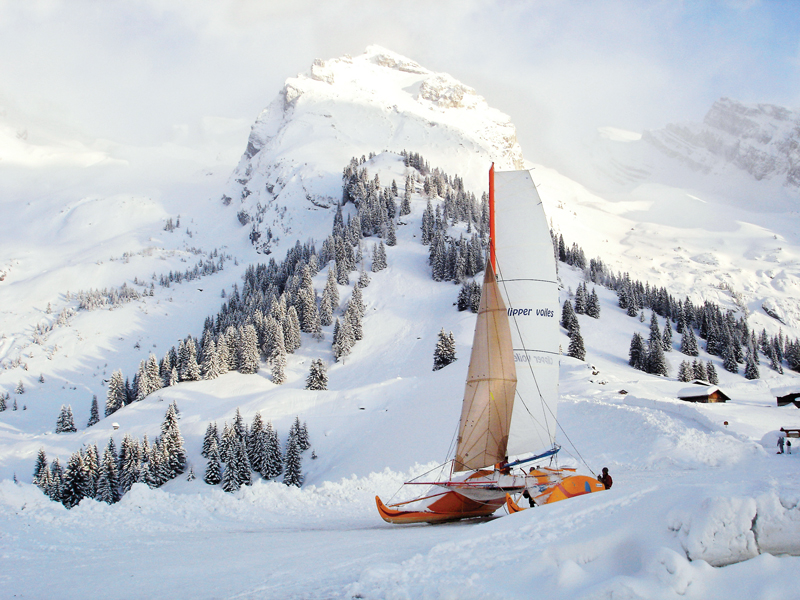 One of three prototypes Roubinet developed as he optimized his ideas for an iceboat/catamaran hybrid is shown here sailing on snow.

Resoltech engineer Valery Loriot says Roubinet “used a unique epoxy system, which is actually two epoxy systems blended together. One is rigid, and the other one is flexible. The hulls of the boat are made of two buoys [tubes], each one made with a skin of carbon/semi-flexible epoxy. So we tested the mechanical traction value of nine blends of the two systems.”

According to the company’s published lab results, the blend of its 1050 and 1600 systems can set elongation between 4.5% and 80%. The samples were post-cured at 240°F (116°C) for 16 hours, though cure at room temperature is possible. Also, by altering the ratio of one epoxy to the other, hardness, modulus, and strength can be similarly adjusted over a considerable range.

Our contributing editor in France, Jean-Yves Poirier, who documented the build, elaborated: “Sébastien made the floats by hand, shaping a large piece of foam, and then laying up carbon reinforcements all over with a soft epoxy matrix to resist inflation pressure. He then had to destroy the polystyrene plug from the inside to get an empty float and close the transom to make it airtight as an inflatable tube. Everything—mast, cabin, rudders, and skis—is carbon, made with wet laminations by Sébastien but with the help of some prepreg fabrics, in the mast, for example.” 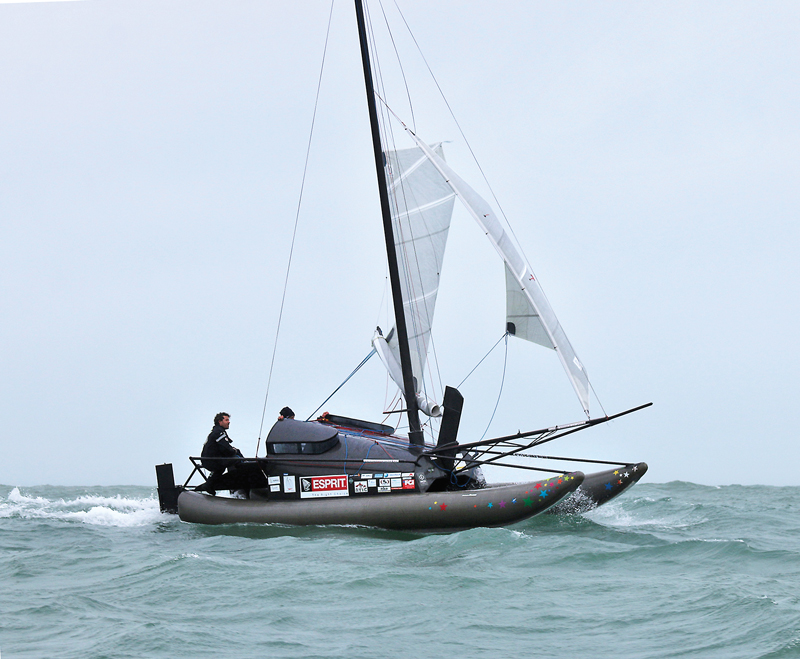 The current version, with composite hulls made from Innegra, basalt fibers, and a combination of two Resoltech resins, sails on water and ice.

According to Resoltech’s newsletter, “Mechanical properties have been achieved at room temperature in order to simplify laminating. Elasticity was easy to control, in combination with [the] 1050 system. Other structural parts, such as the platform, cabin, and mast, have been laminated with carbon prepregs and put together with 3350 adhesive, a mixture highly resistant to shear and peel strength. Its greasy texture and thixotropy [the property of becoming fluid when disturbed, i.e., by shaking] made application easy, without sagging or sinking troubles.”

Roubinet wrote to us: “The North Pole expedition will leave Prudhoe Bay June 15 for two or three months, to include Alaska, Pole of Inaccessibility, Magnetic Pole, and Geographic Pole. Arrival is planned in Spitsbergen. During the expedition we are going to make numerous ice thickness measurements and take samples for pollutants and microplastics. My crew includes two others: Eric André, who accompanied me for the Northwest Passage, is a highlander, living in Sweden for the last 15 years, and is currently finishing a family round-the-world trip on bicycles; and Vincent Colliard.” The latter has a long list of successful Arctic adventures over the last 10 years.