In Port Townsend, Washington, Brandon Davis, with his company Turn Point Design, has carved out a niche for boat design, composite tooling, precision machining, and prototyping all kinds of things for all kinds of uses. He allowed Professional BoatBuilder to peek over his shoulder while 3D-printing a new daggerboard bearing for Felix, his foiling catamaran, which in his educated opinion could use “a 1° tow-out to prevent the boards from fighting each other when we get up on the foils at 16 knots.” The way the boards are set up right now, Davis explained, “there is a slight snowplow effect.” Not good if speed is your goal. 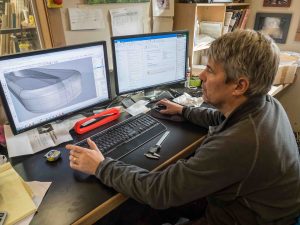 Brandon Davis adjusting the rendering of the part he intends to print in the Rhino 3D CAD program.

After launching the Rhino 3D Computer Aided Design program on his PC, he prepared the design file on-screen and noticed an irregularity in one of the outer curves, which made the part look like it had been dinged by some cosmic force. Before he could start printing, Davis had to correct this fault in Rhino’s triangle mesh to prevent the flaw from showing up in the printed part.

While he did that, he started the Raise 3D/V2 printer he’d bought only four months prior for $4,000. It sits in an aluminum frame the size of a 1980s home stereo cabinet parked right next to the office door under a window (a detail that will become significant). With a webcam pointed at it from above, Davis can check on the progress of any lengthy print job via a smartphone app when he’s out of the office. “When I see a problem,” Davis said, “I simply interrupt the power to stop the process, all via the phone app. 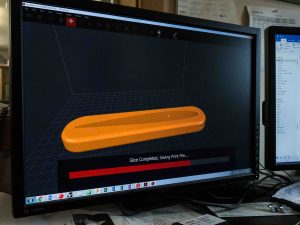 The 3D-file is uploaded from the computer to the printer.

This particular printer can process two different materials simultaneously. For this job Davis used PETG plastic, which looks like a black cable wound up on a reel. The printer nozzle is heated to 482°F (250°C) to extrude the plastic on the printer bed in the prescribed pattern. The choice of printing material, Davis explained, depends on the application, with the bond between the printed layers determining the strength of the part. For more on this and other aspects of 3d printing, see Just Print It!  and our story about printing a Mini 650 racing yacht.

Once he was finished troubleshooting the indent, he converted the data into an STL file in Rhino, which in essence translates the part’s shape and structure for the printer. It swiftly sprang into action and started laying down the PET beads with pinpoint precision in the 3D paths Davis had programmed.

Calculated print time was about seven hours, so we headed out to lunch. Davis explained his rationale for taking the plunge into 3D printing: “It will be a necessity for tooling companies, because it saves time and money and also reduces waste, a side effect of the additive process.” Using a router to create a part, he explained, always removes material, which becomes waste that has to be either discarded or recycled. 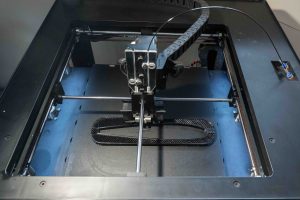 The printer laying down the PETG feedstock, precisely following the pathway described by the data that was uploaded from the computer.

But simple math dictated the decision to add 3D-printing capabilities to his portfolio. “It makes no economic sense to machine such a small part on a huge 5-axis machine, which costs $250 or more to operate per hour. You can do it, of course, but it would take the better part of a day of screwing around. It’s silly to tie up such an expensive piece of equipment with such a small job and have a programmer standing by all the time. Besides, it only takes about 15 minutes to set up the job [for the 3D printer], and then you just click print, and check it from time to time. The cost drops to a buck per hour or thereabouts, including material.”

One of the lauded benefits of 3D printing is “proto­typing on the fly,” which is exactly what Davis did when he was trying to figure out the design of a small plastic scoop to funnel water into the ballast tank of the Skate 15, a kit boat he designed. (See his Design Brief in PBB No. 173.) “I did multiple iterations of the same part, developing different shapes and ideas, which was only possible because of 3D printing. Doing the same on the big CNC machine would have been way too expensive and cumbersome.”

When we returned to the shop, the part was not even half done. Worse, it had separated from the printing bed and was being pushed around by the print nozzle, still dispensing the PETG but into a shape more like black angel-hair pasta that grew from the surface of what was supposed to be a daggerboard bearing. 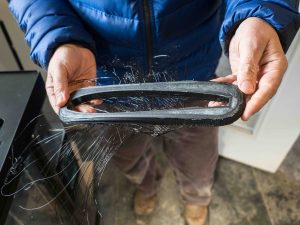 Cold ambient temperatures caused the part to separate from the print bed prematurely, resulting in a rather abstract rendition of a daggerboard bearing. It was a three-step fix: Clean up, reset and reprint.

“This can happen,” Davis said with a smile and pulled the part out to examine it. It was a cold winter day in Port Townsend, so the printer’s slightly drafty station behind the door and under the window had an ambient temperature low enough to cool the printing bed too much. As a consequence, the printed portion of the part also cooled too fast and started to warp on the bottom, which broke the thermal bond it had formed with the printing surface. The solution probably would have been to install a heater element to prevent rapid cooling of the part. But no man-hours were lost, and the cost of the used material was probably less than a cup of coffee. Davis simply had to clean up the printer and start another run. Yet there was one unintended lesson in this exercise: Even an additive process like 3D printing can produce waste if things come unglued.

For more on the advances in 3D printing, read Just Print It!, the cover story of PBB 175. Also don’t miss the companion piece Print Yourself a Boat that previews the attempts of two Italian inventors to 3D-print a Mini 650 that is scheduled to participate in the Mini-Transat race in 2019.