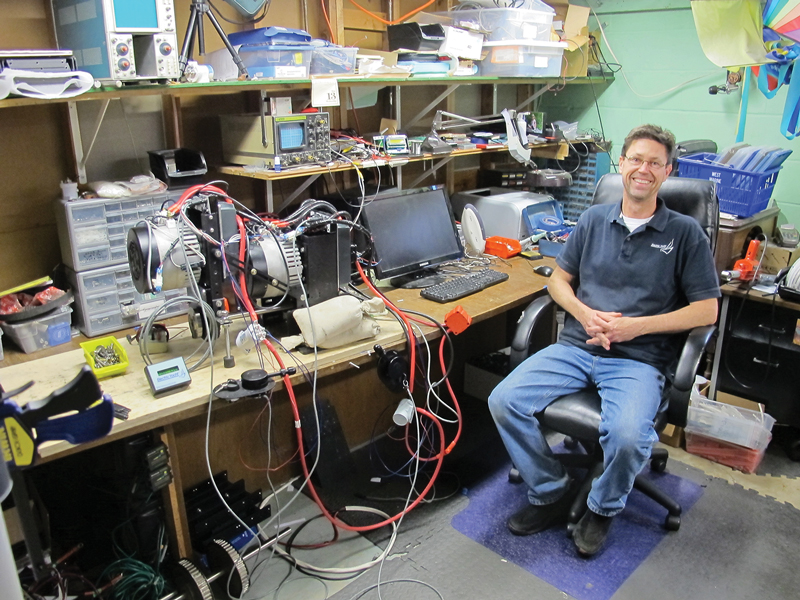 Scott McMillan, founder of Electric Yacht, in his workshop.

Scott McMillan is a sailor, an environmentalist with an interest in renewable energy, and an electrical engineer with specific expertise in electric motor control design. It’s not surprising this combination of interests and skillsets led to experimenting with electric propulsion. Electric Yacht was launched in 2008. I first met McMillan in 2010 when I involved him in the HyMar project’s investigation of electric propulsion options. He was a terrific asset and a wonderful resource on all things to do with permanent-magnet electric motors and their controllers.

For this article, I asked him to send me notes on the history and evolution of Electric Yacht. Here is what he reported:

“Initially, it was a part-time endeavor with modest expectations. There was one 6-kW model. In 2010, more powerful permanent magnet motors came on the market. This allowed me to build single motor systems up to 10 kW and dual motor systems up to 20 kW. Since then, we have built on the same motor platforms and same basic unit construction to offer motors up to 30 kW at 48VDC and up to 60 kW at 96VDC.

“The bread-and-butter repower market consists primarily of 27′ to 36′ [8.2m to 11m] boats that were built in the 1960s through 1980s. Most of these boats are day or weekend sailed and don’t often go far from home. Typically, the batteries are recharged from marina shore power. The customers like the greatly reduced maintenance, quiet operation, ease of use, and elimination of diesel fuel and exhaust smell offered by our systems. These are also less costly to install than a diesel repower.

“Based on research done before the recession, I thought that several hundred units a year would not be unrealistic. Since the recession, with too few new sailors replacing the ones that are aging out of the sport, the number of boats that have been repowered is much lower than anticipated. Too much supply, too little demand. As it stands, we have yet to reach 100 units in a single year.

“The company took on debt in the early years, expecting to grow and repay the debt quickly. A great deal of time, money, and effort was expended in trying to raise capital for an aggressive product development and marketing effort. In the end, only a small amount was raised in an initial ‘friends and family’ round. In retrospect, I do not believe the plan would have succeeded; the market is not big enough to support the company that was envisioned. Servicing and paying back that debt impacted the business such that it operated at breakeven, or a loss, for a number of years. I have personally worked for next to nothing for much of the company’s existence. In fact, I have put tens of thousands of dollars into it.

“Things started to change in 2017, and the start of 2018 has been strong; the company has been making a little money. After 10 years, Electric Yacht is finally on a firm financial footing, although I am still not making a full-time living from it. It’s been quite a grind!”

So how does McMillan’s story compare to other companies in the field of electric and hybrid propulsion? Check out Nigel Calder’s A Tale of Two Companies to find out.

In 2002 James Lambden purchased a 1977 Catalina 30, Kapowai, with an Atomic Four engine that “would habitually quit at the most needed of times.” He removed the engine and repowered with an electric outboard motor that proved completely inadequate. And so began a 16-year odyssey to perfect electric-propulsion systems for yachts. His second system also came off the shelf, but the third and subsequent systems he developed himself using Kapowai as a test bed for the components that make up a fully integrated electric-propulsion system.

Over the years, Lambden’s The Electric Propeller Company, or Electroprop, in Santa Barbara, California, has experimented with a variety of electric motors, motor controllers, gearboxes, throttles, and batteries, and developed increasingly sophisticated electronic control systems and software. Lambden: “You can choose from 10 different motors, a variety of motor controllers, and numerous fans, relays, and other components, resulting in millions of possible permutations. It takes time to work through all the possibilities and to develop an optimized system.”

Electroprop now has a range of prepackaged electric- and hybrid-propulsion systems from 6 kW continuous to 21 kW, operating on 48V and 96V. Boatbuilders can supply a fiberglass engineroom, and Electroprop will ship it back complete with a fully functioning propulsion system ready to drop in and requiring minimal electrical installation.

The company focuses on reliability and ease of use. All the systems’ electrical/electronic components are housed inside an anodized-aluminum case that acts as a Faraday cage to protect the drives from lightning. A cable-operated (mechanical) throttle connected to the side of the box is in contrast to the more common digital (electronic) throttle controls. Lambden says it’s “more reliable and easier to install.” The CAN bus–connected system display is fastened into the case, but it is removable for remote installation.

The aluminum case is designed as a base unit with two large hinged-out sections that provide excellent access to all components, terminals, etc. If any part fails, it is easy to replace. Access covers provide a variety of fan-cooled air-inlet options for different physical installations. All drives have waterproof wiring harnesses. It is obviously a well-thought-out physical setup.

“We have installation-proofed the system. We have lightning-proofed it. We have gear drives, which are more efficient and more reliable than belts, eliminate side loads, and reduce the cost of ownership over time. The systems are designed for first scheduled maintenance to be in eight to 10 years, when batteries are replaced,” Lambden says. 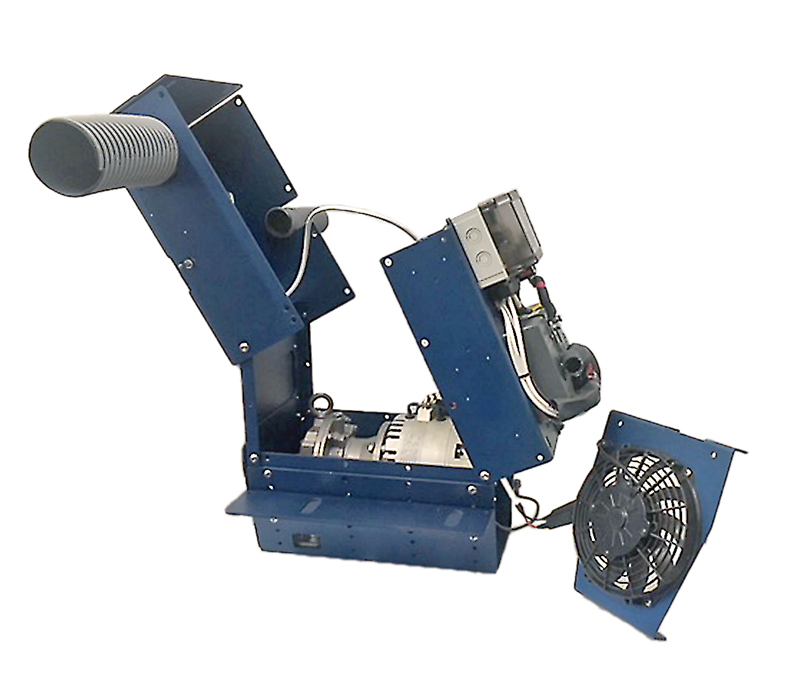 The opened-out case of an Electro­prop unit shows the various sections and the considerable thought and engineering that went into making all components readily accessible.

“The secret to arriving at technological superiority is an unlikely one. It is done by proceeding with a very limited number of custom orders, and avoiding volume production until all research and development is completed, and volume production capability is fully developed. This reserves funds for development while limiting the risk of exposure to the marketplace.”

His current target is to build and install one system a month, ramping up to 100 a year. Concurrently, he’s organizing a dealership network and distributors.

Lambden has invested hundreds of thousands of dollars into Electroprop, which he still owns. He says, “Encouragement from friends, customers, and like-minded individuals who want to see sustainable, high-efficiency, low-carbon-footprint technologies has been essential to the development of these systems.” He has postponed raising equity in the belief that “the further along the development, the less the risk borne by the eventual stockholders, and the more the equity is valued.” He summarizes: “After 16 years of doing this, the company is in a strong position technologically, with scalable manufacturing. Rollout and OEM adoption of the technology will become the focus of the next chapter.”