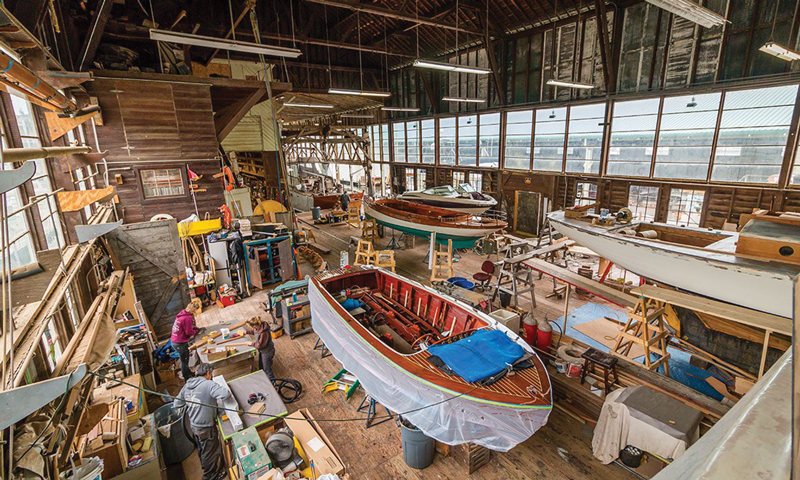 The Jensen boatshop is an impressive old structure on Seattle’s Portage Bay waterfront, sure to be missed if it’s torn down for new commercial businesses

News came to me from a sailor friend, Charless Fowlkes, that Jensen’s Motorboat Anchor Jensen’s boatyard on the Seattle waterfront will be sold, possibly for a future restaurant. He and many others on the WoodenBoat forum have expressed sadness. “That’s the last of the old places gone,” wrote one. “Doc Freeman’s, Vic Franck, Prothero’s barge…nothing left. Inevitable given the way this city has been going for the last 30 years, but it still leaves a pretty big hole.”

The yard was founded in 1927 by Anchor Jensen’s parents, Antonius “Tony” and Bessie Jensen, after a move from Victoria, British Columbia. As they got their business going, they first lived on a boat of Tony’s making, and then a house above the water, attached to the yard. Tony was a violin player first it seems, performing with various orchestras. He also happened to love building and repairing wooden boats. Their son was born to it, assuming management of the business after serving aboard the battleship Iowa during World War II. Over the course of his 63 years’ assiduous work, he built and repaired thousands of boats. He also owned Spencer’s Landing Marina on Lopez Island, in the San Juan archipelago. “When our family visited Seattle,” said Fowlkes, “we usually visited Jensen Boat just to look around with wonder that this ancient wood building still existed and still engaged in the business of building and repairing wooden boats. The special smells, old boats quietly waiting repairs, old tools making new parts, creaking planks as you walked on the ancient floors, shafts of light…sometimes left the impression that you were in a museum or a church.”

Beyond the rather impressive presence of the building, and the sheer number of customers, what assures Anchor Jensen’s place in motorboat lore is the design and construction of two champion hydroplanes, Slo-mo-shun IV and Slo-mo-shun V. The former won three Gold Cup events on Lake Washington, and a Harmsworth Trophy, raced on the Detroit River. It is said that the people of Seattle developed a deep affection for hydroplane racing, thanks to Jensen, embracing him as a city icon. 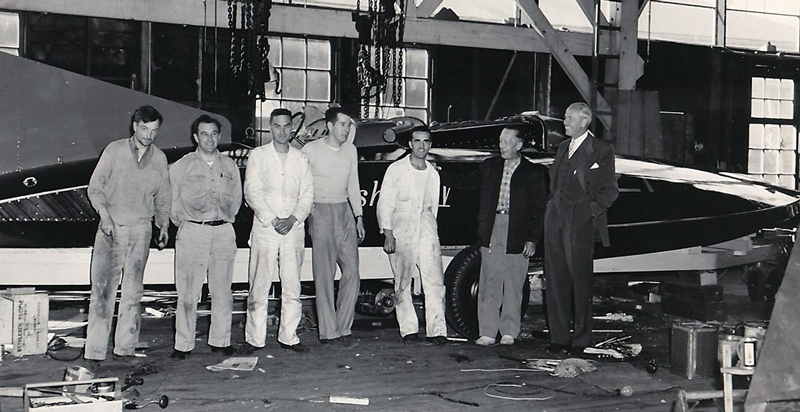 Anchor Jensen died in 2000 and the yard ownership passed to his son, Dewitt Jensen, with management assumed by Steve Evavold and Peter Proctor, with no significant alteration in mission: building and fixing wooden boats. See their web site for wonderful photos of the yard, past and present. It’s a great spot for a restaurant, but wouldn’t we all wish it still a boatshop, with the sound of saws and chinking hammers, and the smell of freshly cut wood emanating into the chill Northwest air through open windows?