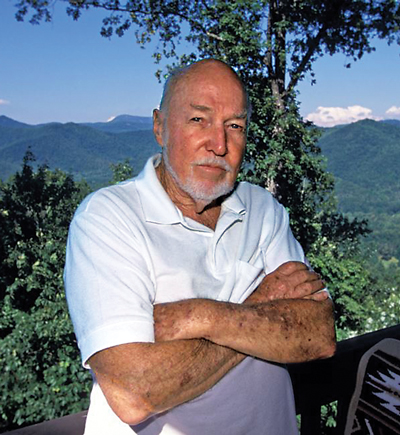 Carl Moesly, who died last December, was
universally admired for his many and
various accomplishments, from piloting
aircraft during WWII and building thousands
of production boats, to popularizing the
center-console and circumnavigating the
globe in a sailboat, twice.

The article with the above title, written by PBB’s technical editor, Steve D’Antonio, in the October/November 2004 issue (No. 91), recounts with unfortunate-though-necessary brevity the incredible career of a modern-day adventurer, military serviceman, and boatbuilder. Carl Moesly passed way December 28, 2018, presumably at his home in Key Largo, Florida, at the age of 97.

High points from D’Antonio’s biographic sketch tell us Moesly’s parents eloped and then immigrated to the U.S. from Switzerland. They raised their family on the New River of Fort Lauderdale, Florida. At age 13, Carl Moesly built his first boat, of scrounged materials that included a deck covering of feed sacks set in wet house paint. A larger 32′ (9.7m) powerboat with a straight-eight Buick engine followed, completed without power tools. That was 1937, a year after he sailed a 15‘6“ (4.7m) Snipe one-design sailboat to the Bahamas because he was annoyed by mosquitoes in the Florida Keys.

From Air to Sea

During World War II Moesly’s interests transferred to aircraft, and he accumulated more than 1,000 hours of flight time, piloting mostly cargo planes in the Pacific Theater. Afterward, he went to work for millionaire industrialist Arthur Vining Davis (Alcoa Corp.), overseeing his fleet of planes and other aviation interests. Moesly was abruptly thrust back into the marine world when Davis partnered with the owners of American Marc, manufacturers of irrigation pumps and generators, who decided to divert into boatbuilding. Moesly’s directive: build 6,000 fiberglass boats in one year. American Marc had already begun production, and Moesly, although a neophyte to production manufacturing, was unimpressed and set to work with in partnership with Walt Walters. Long story short: Davis’s health declined, sales slumped, and in 1961 Moesly was given the chance to buy the company, cheap. Knowing he had a lousy product, he burned the molds, unloaded unsold inventory, and laid off most of the employees.

Moesly, according to D’Antonio, was buying time to develop a new line of boats. The ultimate result of his research was Sea Craft. He wanted a rough, tough small powerboat, good for fishing and all-around fun on the ocean. In an early Sea Craft ad, Moesly wrote: “It’s a boat with a variable deadrise bottom. On each side we have three panels, each with a different deadrise. The sections next to the keel have a high deadrise to slice into the seas—penetrate the water effortlessly and cushion the ride. The intermediate section with a moderate deadrise makes for good work at medium speeds. The outer sections next to the chine are virtually flat and give me good stability at low speeds and maximum lift while putting the boat on a plane. The longitudinal steps on my hull are different, too. They’re recessed…no horsepower lost by diverting water here! They act as keels.…”

Look at the drawings on page 127 in  PBB No. 91. The longitudinally stepped panels look similar to those on the Petestep described in the last edition (No. 177) of this column, except for the orientation of the steps. And catch D’Antoni’s Parting Shot about diesel outboards, which includes American Marc’s products that were introduced during Moesly’s tenure there, before starting Sea Craft.

Moesly promoted the brand by participating in offshore races, placing well in several Miami–Nassau Races. Innovations include popularizing the center-console concept, and the one-piece molded fiberglass structural grid bonded into the empty hull.

After eight years of hard work, Moesly sold Sea Craft, and in 1970 he and his wife, Jeanne, took off sailing, circumnavigating twice, first in a 38‘ (11.6m) cold-molded William Atkins double-ender, and later in a 50‘ (15.2m) ketch of his own design. For more on his exploits, please read D’Antonio’s article referenced above. D’Antonio also shares this personal memory:

“I first met Carl and his wife, Jeanne, at their mountaintop home in Otto, North Carolina. Because there wasn’t a hotel within 25 miles they graciously agreed to allow me to stay with them while I interviewed Carl. He and I became friends, staying in touch by mail and phone. During one of my visits to their new home in Key Largo, he related a story I’d heard before, about one of many close calls he had while flying C-46s in the Pacific during WWII. After finishing he looked at me for a minute without speaking. I doubt he was organizing his thoughts, because he was much too sharp to ever need to do that. I think he was reliving the episode. Then he said with deliberate hesitation, ‘I never thought I’d live this long.’ I’m glad he did.”