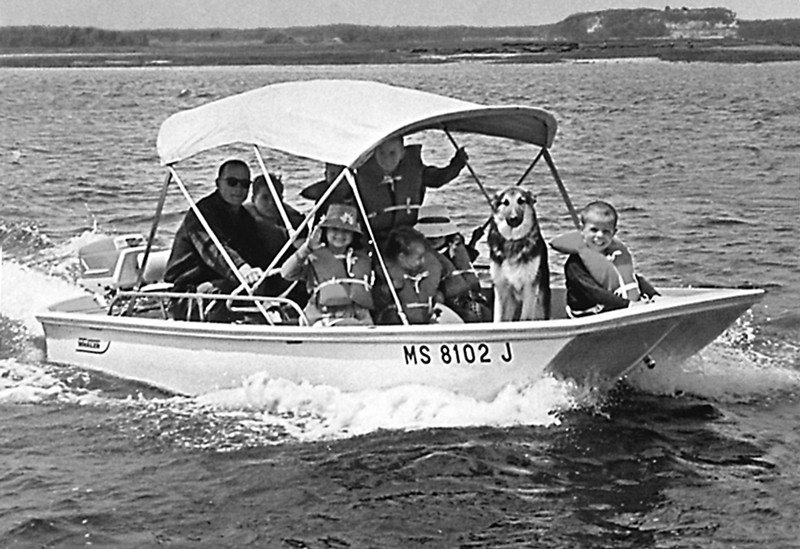 Paul Herzan, member of the Cooper Hewitt Design Museum’s board of directors, has wide-ranging interests. The Smithsonian Institution’s website lists 53 objects he has been involved with, encompassing drawings, prints, product design, textiles, and decorative arts. Automotive projects are prominent. There are no boats on the list—yet.

Herzan grew up summers in the upper Midwest, in lake country, where he spent many happy hours boating. One craft that figures strongly in his childhood memories was a Boston Whaler 13 (3.96m), the model that launched the company in 1958. As he has done so passionately and competently, Herzan organized a team to research and produce a history of Boston Whaler, ably written by freelancer Matthew Plunkett. 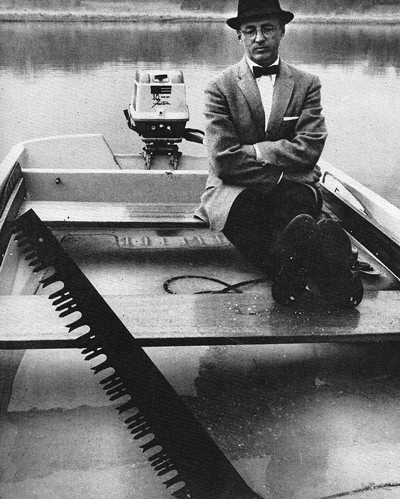 Dick Fisher brilliantly marketed the first foam-filled Boston Whaler with this photo of a lumberjack’s saw cutting the boat in half while he sits expressionless in the stern.

The story begins with three friends from Massachusetts: sailors Ray Hunt and Dick Fisher, and the quiet Bob Pierce, who when out sailing was known to turn the helm over to his wife or son so he could go below to “get something done.” Hunt, of course, was the brilliant yacht designer of sail and power, whose credits include the Concordia yawl, the International 110, and most famously, the deep-V powerboat hullform. Fisher had a degree in philosophy and sharp interest in the way things work. Pierce was mainly interested in machines. Fisher and Pierce designed a taffrail log, which they patented in 1936, and three years later formed the company Fisher-Pierce to manufacture electrical components like relay switches for traffic lights; it still exists today, making a variety of electrical fixtures and controls.

Fisher became consumed with the idea of a superior small powerboat hullform, and was determined to improve upon Albert Hickman’s notorious Sea Sled. That boat in some ways appeared to be a breakthrough design, but could not overcome a few bad habits (see also “Tough Sledding,” on page 46 in this issue). With Hunt’s help, Fisher kept refining a cathedral hull design, ultimately incorporating a center sort of nacelle and minimizing the outer V-shaped features. The bow was wide with a gentle radius and a mahogany helm station with the wheel located about a third of the distance forward of the transom. This beloved feature lives on in the many restored classic Whalers. 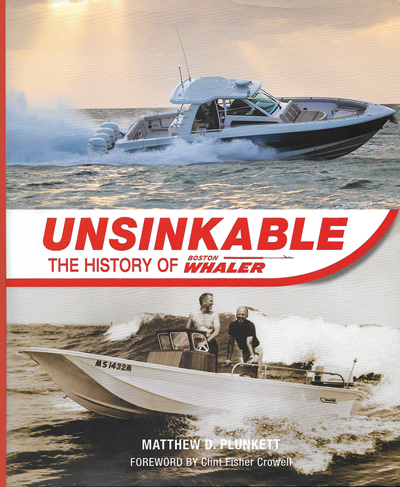 A history of Boston Whaler was recently published, chronicling the fascinating story of how partners Dick Fisher and Bob Pierce, working with designer Ray Hunt, developed the hullform inspired by the Hickman Sea Sled.

Of greater importance was the method of construction: foam-filled fiberglass skins that rendered the boat unsinkable. Fisher developed a proprietary blend of foam and spent much time devising a means of keeping the foam from fracturing. A number of so-called sheer braces were installed in the space between skins, which was a closely guarded company secret protected well beyond its 20-year patent life.

Unsinkable traces all the phases and changes that came to Boston Whaler, including hullforms, from its inception to the present. Notable was Fisher’s brilliant marketing advertisement in which he had a boat cut in half with a lumberjack’s wide-toothed saw while he sat stoically on the aft seat, wearing a sport coat, fedora, and bow tie. The enormous contributions of Bob Doughtery are amply acknowledged, as are later owners CML, Reebok (yes, the shoe company), Meridian Sports, and Brunswick. If, like me, you are fascinated by the history of fiberglass boats, Unsinkable belongs in your library. Motorbooks, an imprint of The Quarto Group, 200 pages. $35.