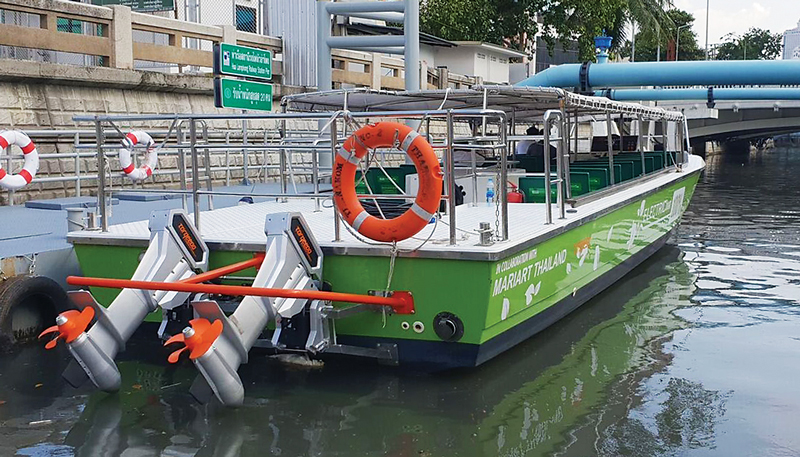 The Torqeedo-powered passenger ferry in Singapore

Aside from company and product news, 178 Short Cuts also remembers Andrew Higgins, Raye Montague and Charles Everhart, three meritorious individuals of the boatbuilding and design trade who sailed for Fiddler’s Green or were recognized for their contributions to the industry.

≡ Andrew Higgins, 1886–1952, a New Orleans boatbuilder who developed and built the LCVP (Landing Craft, Vehicle, Personnel) that was instrumental in the Allied invasion of Normandy during World War II, will be inducted posthumously into the National Inventors Hall of Fame this May in Washington, D.C.

≡ Advanced Wing Systems, the Australian developer of so-called soft-wing sails, has partnered with the New York Yacht Club’s America’s Cup challenge American Magic. AWS’s Greg Johnston says he has helped incorporate its technology in the 38‘ (11.6m) test boat, the Mule. Johnston says it “delivers many of the performance benefits of the rigid-wing sails used in previous America’s Cup matches, but with fewer operational and logistical difficulties.” www.advancedwingsystems.com.

≡ Searching for a new boat? Even if you aren’t, many of your customers are. The online marketplace Boat Trader recently announced the launching of a new app for iOS and Android mobile devices, which it says offers faster searches for new and used boats. Among the improvements are state-of-the-art location technology and the ability to save searches.

≡ The U.S. Navy has its own “hidden figure,” Raye Montague, whose career parallels the black female NASA mathematicians who greatly assisted the nation’s space program and were recognized in the book and  movie Hidden Figures. Growing up in the segregated South, Montague earned a degree in engineering and went on to become the first female program manager of ships. According to a press release announcing her death last October, at age 83, “She revolutionized the way the Navy designed ships and submarines using a computer program she developed in the early 1970s. It would have normally taken two years to produce a rough design of a ship on paper, but during the heat of the Vietnam War Ms. Montague was given one month to design the specifications for a frigate. She did it in 18 hours and 26 minutes.”

≡ Charles Everhart, the first person hired by Hatteras Yacht Co., died last December at the age of 90. Among his several positions was serving as plant manager of the High Point, North Carolina, facility until 1976. He retired in 1985.

≡ In PBB No. 175 we reported on the 50th anniversary of the King Plastic Corp., makers of the ubiquitous iso­tropic product King StarBoard. Reader Paul Martin, noting several instances of the word stiffness, undertook research for a paper titled “Stiffness of Plastic.” It defines the term flexural modulus, references the pertinent ASTM and ISO tests, and includes a lengthy table of common plastics with Min Values (Gpa) and Max Values (Gpa). Find it here