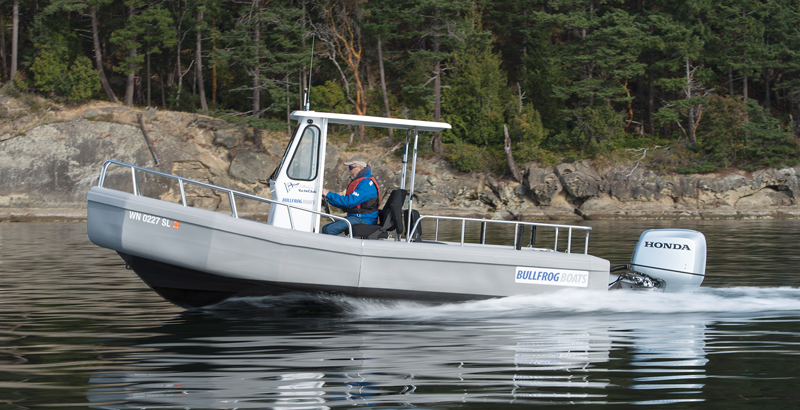 Craig Henderson, whose Bullfrog Boats of Bellingham, Washington, has sold more than 600 RIBs (rigid inflatable boats), calls conventional air-filled technology “deflatable” boats. “Poke a hole in it and gonzo,” he told reporters in a local television interview some years ago. The tubes on his aluminum hulls are filled with foam, so technically they cannot be RIBs, though that’s certainly what they look like.

Henderson is not the first to retain the advantages of resilient tube perimeters. Neighboring Safe Boats International, Vripack, and Ocean 1 Yachts (reported in PBB No. 169) among others employ foam-filled collars for stability, cushioning impacts, and flotation.

Granted, Henderson’s patented solution varies from those to a degree, and he arrived at it in his own fashion. He majored in Industrial Technology Plastics and Manufacturing at Western Washington University in Bellingham, where he developed a strong interest in automobiles. He paid for his schooling by working as a machinist apprentice at the Vehicle Research Institute. On his own time he built a diesel-powered car that won the 1986 Three Flags Econo Rally, averaging 107.7 mph (173.3 kmh) from the Canadian border to Tijuana, Mexico, a number he bested several years later to 119.1 (191.7 kmh) utilizing a 12.4-gal (50-l) fuel tank.

After a stint working at Honeywell Marine he decided to live aboard a boat. He built a 53‘ (16.2m) steel cutter he lived on for seven years before moving ashore to work on the Bullfrog project, inspired by a quest for the perfect dinghy/yacht tender. He spent four years working on a prototype, focused on making it unsinkable, stable, and durable. The result: an aluminum/polymer boat with positive flotation, and a polyethylene flotation collar. He partnered with his friend Andrew Vance, nephew of yacht designer Ron Holland, who from his home in New Zealand develops the computer-generated cut files for Bullfrog.

Freelance writer Bruce Hendrick wrote an (unpublished) piece that Henderson shares to explain how the boat’s tubes are rotomolded at Cypress Designs in Bellingham: “He starts by creating an aluminum two-part mold that is then highly polished to facilitate easy release of the part. The next step is to position the metal inserts in the mold to which owner-selected options will be attached. A ‘shot’ of polyethylene powder is then poured into half of the mold, which is then bolted together. This is where the process gets tricky, as the mold has to be rotated and heated in an oven large enough to hold the mold.”

The challenge, Hendrick explains, is that the mold must be rotated and pitched simultaneously at a controlled rate to ensure that the finished part will be of uniform and constant thickness for maximum strength. This process takes about an hour. Then, while the mold is still being rotated and pitched, it is removed from the oven and set over a bank of fans for even and uniform cooling to guarantee the quality and structural soundness of the final piece. After the mold has cooled, it is unbolted, and the top half is lifted off with a chain hoist, and the piece is extracted. The final step is removing the flashing that’s left at the mold joint, which is quick and easy. 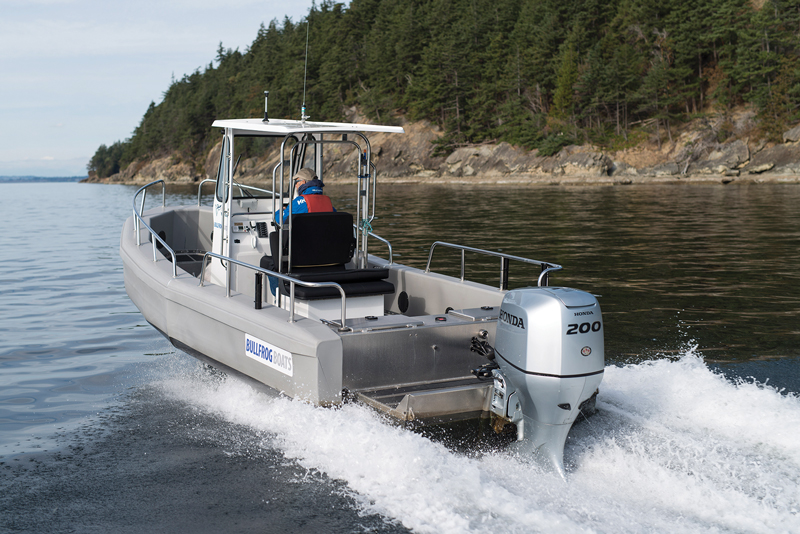 Builder Craig Henderson subcontracts parts cutting and aluminum fabrication and completes assembly and rigging in his own Bellingham, Washington, shop.

The next step is to cut access ports in the finished piece so the parts can be bolted to the inserts in the polyethylene tube, which is then glued and bolted to the aluminum hull structure.

Henderson says, “We use two different fab shops for cutting parts, and then Mike Kearney at Kearnco Specialties welds the hulls. All the FRP parts are made by local boatbuilder BAMF Boats. We then do the final assembly and rigging with foaming the tubes, and complete the boat with everything the customer needs.”