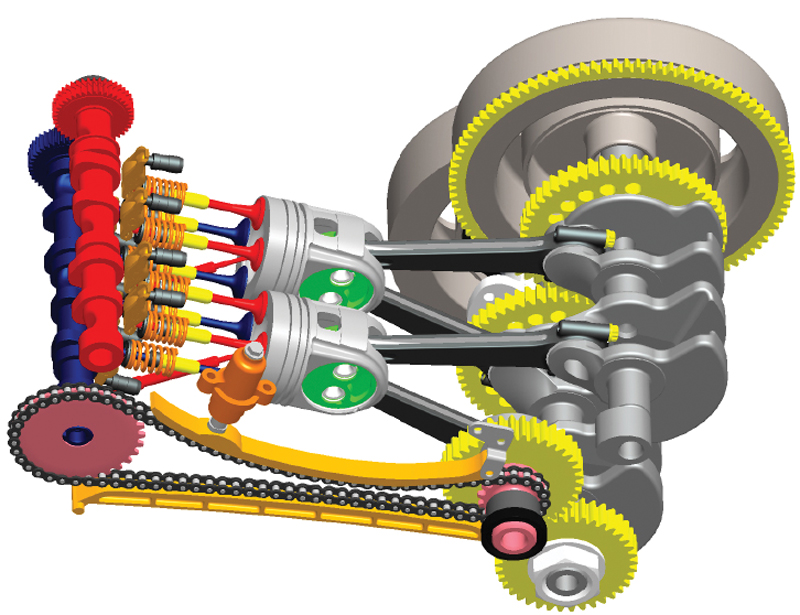 It is well known in the boating industry that the popularity of outboard motors continues to trend upward. I/Os are dead in the water. Inboards now seem relegated to midsize and larger motor­yachts. Twin outboards are so passé. Triples and quads are de rigueur. Besides adding another motor to the highly reinforced transom of, say, a 40‘ (12.2m) center-console fishing machine, are there any other options? Well, yes, sort of. There is an emerging market for diesel outboard engines (outboard motors was always a poor choice of words). All the companies discussed here say they are targeting commercial customers in transportation, oil and gas, fishing, and other marine sectors, because it’s perceived that those sectors will pay the higher cost (versus gas outboards) for the convenience of having one fuel aboard the mother ship, and longer engine service life with longer intervals between maintenance. But with more exposure, diesel outboards are now finding a broader market. Here’s a brief overview of several major players in this developing technology.

Interestingly, diesel outboards are not new. A 2015 article in the online publication Boatmags cites the Amarc 10, a two-cycle diesel outboard made by American Marc in 1960–61, as an early entrant. As a side note, this is the same company Carl Moesly worked at before eventually acquiring the boat tooling assets (see Rovings, PBB No. 178). Evidently, the company’s lofty expectations for boats and diesel outboards foundered.

Yanmar developed 27-hp and 35-hp (20-kW and 26-kW) diesel outboards and then ceased their production for a lengthy period, perhaps to reassess its strategy, before partnering with the German company Neander Shark Motors to develop and distribute the Dtorque 111 in 2015. The 50-hp (38-kW) engine is claimed to have more torque (111 Nm/81.9 ft-lbs at 2,000–3,000 rpm) than a 60-hp (45-kW) gasoline outboard over most of its speed range. The four-stroke turbo­diesel has double counterrotating crankshafts that minimize vibration to a level not expected in a two-cylinder engine, and Bosch common rail direct injection. 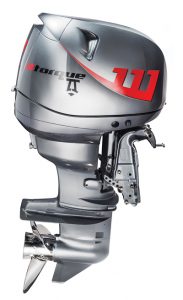 It’s touted as a good choice for commercial applications—“pushing heavy vessels, trawling, or idling for hours”—such as a tender working near oil fields, where the lower flammability of its diesel fuel is much safer than gasoline-fueled outboards. Other benefits include higher fuel efficiency (around 12 l per hour/3.2 gph at WOT, said to be half that of a gas engine of similar size), durability, and reliability. Exhaust emissions meet the E.U.’s RCD 2 standards. Weight is 175 kg (385 lbs) compared to 109 kg (240 lbs). A 75 hp (56 kW) is expected soon. The manufacturer of the 10,000-hour engine is Steyr Motors, maker of larger diesel engines for numerous markets. It will be fitted with an outboard leg by Selva.

Neander Shark Motorfahrzeuge GmbH was established in 2003, and an early version of the engine was installed in a motorcycle, a passion of founder Lutz Lester. In 2006 the company incorporated as Neander Motors AG, followed by Neander Shark GmbH in 2009, a subsidiary that develops nautical applications for diesel technology. After its turbo­diesel technology won awards in Germany, Yanmar joined as an investor and sales partner in 2015.

While Lester targeted commercial applications, the engine has been exhibited at the last several recreational boat shows in Düsseldorf to gauge consumer interest. The response has reportedly been positive. However, spokesman Miri Zymny told us: “Our engine is intended for commercial shipping, because it pays off after extensive use every year. Therefore the leisure market is not in our focus.” 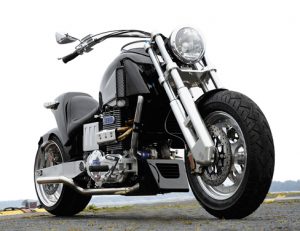 In the early 2000s Neander Shark’s founder, Lutz Lester, became intrigued with small diesel engines for nonautomotive applications, and installed a prototype in this hot-looking  motorcycle as a proof of concept.

Cox Powertrain was founded in 2007 by auto engineer David Cox, who believed he could employ F1 racing technology in the development of lightweight diesel engines. The following year $6.53 million (£5 million) was raised to research and create a large diesel outboard engine. The eventual result was a 300-hp (225-kW) turbodiesel that debuted at the Fort Lauderdale International Boat Show last year. The CXO300 is a four-stroke 4.4-liter V8 cast in aluminum to save weight—a primary concern of diesel outboard manufacturers owing to the inherent high compression (16:1) required for ignition of diesel fuel. Reports say the engine has a narrow 60° V angle to reduce footprint. Maximum torque is an impressive 479 ft-lbs (650 Nm) at 1,300–3,000 rpm. The company estimates fuel consumption at 2.6 gph (10 lph) at 2,000 rpm and 13.2 gph (50 lph) at 3,500 rpm. Weight is a hefty 825 lbs (375 kg). 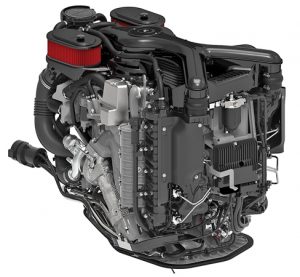 The most powerful diesel outboard introduced to date is Cox Powertrain’s 300-hp (225-kW) CXO300. Shown is a rendering of its powerhead.

SeaStar Solutions was brought in to supply controls for steering and throttle. Manufacturing takes place at a dedicated facility in Shoreham, West Sussex, U.K., and a worldwide dealer network is in the works. Price will be in excess of $55,250 (£42,000).

About its market focus the company’s global sales director, Joel Reid, says: “While we were not initially targeting the recreational market, the high demand from this market has led us to readjust our direction….Our presence at recreational shows such as FLIBS [Fort Lauderdale International Boat Show], Miami International Boat Show, Monaco Yacht Show, or Cannes Yacht Show, where recreational boating and saltwater sports fishing are so popular, has been very strong. The response from this type of user has more than matched our expectations.”

The largest of several diesel outboards offered by Cimco Marine, this 200-hp (150-kW) engine delivers power to the propeller shaft by means of a carbon fiber belt.

Cimco’s Pim Polesie says, “We do not prevent pleasure craft users from using the OXE Diesel. The benefits of the OXE Diesel are as true for them as for the commercial users, but from a financial perspective it is more difficult to motivate the upfront cost. The break-even period [over gasoline outboards] is approximately 600 hours in Europe and 750 hours in the US.”

Cimco also recently announced the Bison Project, converting BMW’s 3-liter turbodiesel automobile engine to marine applications. An earlier press release said Semcon (www.semcon.com) was “handling the design work, calculation, and simulation as part of the project.” The 300-hp (225-kW) outboard is expected to be released in 2020.

Mercury Racing developed for the U.S. Department of Defense the DSI Outboard, a two-stroke 3-liter V6 diesel that is spark ignited and runs on ultralow-sulfur fuel. The crash of a Navy ship in 1995 that resulted in a gasoline fire motivated the DoD to remove gasoline engines and fuel tanks from ships and develop safer alternatives. The DSI is available only to the military.

R&D is also under way elsewhere in the world, including Italy and New Zealand, so there should be a smattering of new products coming to market in the near future.