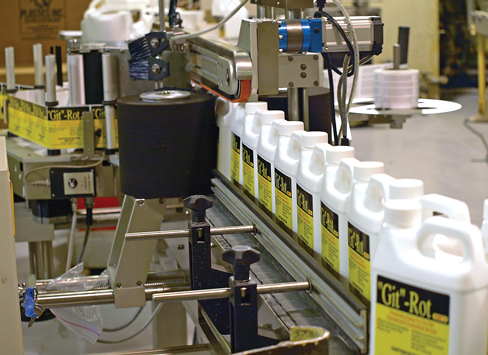 “Git”-Rot, a low-viscosity resin that penetrates rotten wood and hardens to restore its structure, is one of many products developed and marketed by Edwin Kehrt’s Life Industries company.

It’s strange and fascinating how some companies are founded. Sometimes the formative event is lightbulb inspiration, other times serendipity or plain dumb luck. For Edwin Kehrt, founder of Lifeline Industries, the manufacturer of BoatLIFE marine caulks and sealants, it was an outgrowth of his military service in the Philippines during World War II. As a captain in the U.S. Army Corps of Engineers, he managed a floating power plant in Manila. According to the company’s history, the chemical compound polysulfide was used to repair bullet holes in aircraft fuel tanks, and Kehrt became “familiar” with it. After the war he bought his first boat and thought there were no suitable caulks/sealants for marine use—so, remembering those bullet holes and the goo personnel used to fill ’em, he must have thought, “Aha! I know what I can use to bed my leaky portlights!”

A long line of products

He started a business and introduced polysulfide to the marine industry, and then to aviation (AeroLIFE) and RVs (RV LIFE). To expand production, in the early ’70s he bought a coatings and flooring company and in a few years combined facilities on Long Island, New York, later moving to South Carolina. Today, managed by Kehrt’s daughter, Grace L. Schmidt, the product line also includes epoxies, cleaners, waxes and polishes, solvents, and more. This year Life Industries celebrates its 60th anniversary. You can also thank them for the indispensable “Git”-Rot. A job well done. Life Industries, 4060 Bridgeview Dr., North Charleston, SC 29405 USA, tel. 800–382–9706