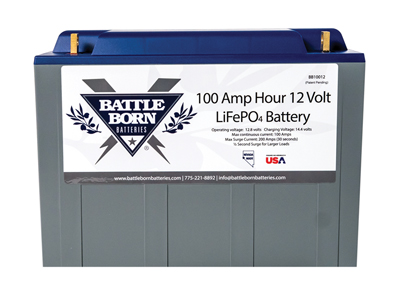 Battle Born Batteries is one of an emerging number of companies manufacturing lithium-ion alternatives to more conventional gel, AGM, and leadacid batteries for recreational markets. Its 100-Ah battery is billed as a drop-in replacement, but it’s not quite that simple.

Dave Exley, who builds a nice flats boat at his Green Heron Boatworks in West Melbourne, Florida, called recently to tell of his lithium battery research. He has been following with considerable interest the articles in PBB written by Nigel Calder, the most recent of which was “Pushing Batteries to the Limit,” in No. 170. Exley said there are now lithium-ion batteries suitable for marine use that are not only safe from thermal runaway but offer notable advantages over conventional lead-acid battery technology. As an example of a manufacturer now offering off-the-shelf products, he suggested we take a look at Battle Born Batteries.

This company, along with automaker Tesla and electronics company Panasonic, is located in Reno, Nevada, which Battle Born’s website says is “basically the center of the li-ion world.” CEO Denis Phares told us. “We are becoming increasingly prevalent in the aftermarket and are actively seeking OEM partners in the marine industry.”

Battle Born batteries utilize LiFePO4 technology. The inherently low electrical conductivity of LiFePO4 is overcome by coating, or doping, with more conductive materials. Manufacturers such as Black+Decker, Daimler AG, and Cessna also incorporate this technology. Advantages include super-quick recharging, and the ability to maintain a near-constant voltage when it is discharged, meaning one won’t suffer problems associated with a “weak” battery.

Battle Born says its 100-Ah LiFePO4 battery is a drop-in replacement for lead-acid batteries and has a battery management system (BMS) built in with high- and low-voltage cutoffs. It can deliver 200 amps for 30 seconds, and higher loads for half a second. There are also high- and low-temperature cutoffs. The charging algorithm is constant current and constant voltage until peak voltage is reached, at which time current is lowered. Progressive Dynamics, Magnum, Victron, and Xantrex make chargers that deliver 14.6V for the entire charging cycle. Batteries are available in 12V and 24V and may be connected in parallel and in series.

But as Calder cautioned, “…the high charge acceptance rate of lithium-ion batteries will stress charging devices and the boat’s wiring in ways they have never been stressed before. A boatyard or marine technician…would be well advised to insist on a full analysis of the boat’s energy systems prior to undertaking any work.”