White’s Atlantic series of fast cruising catamarans, such as the 57’ (17.4m) shown here, have been his most popular designs; a trademark feature is a second cockpit between the cabin and the mast for superior viewing of sail trim.

It was 36 years ago, in 1983, that multihull designer Chris White hung the proverbial designer’s shingle, Chris White Designs, outside his Massachusetts home. He now boasts more than 80 custom cruising catamarans and trimarans under sail worldwide. In the 1970s, he apprenticed, as it were, with Jim “Trimaran” Brown at his shop in Virginia. Inspired, White built the 52‘ (15.8m) cold-molded trimaran Juniper on those grounds, and then sailed the heck out of her. She was an object of great beauty, with the Virginia cedar hull exposed inside. I first met White when he asked editors at Cruising World magazine if any would like to join him as he sailed along with the fleet of that summer’s Classic Yacht Regatta on Narragansett Bay. I jumped at the chance. That day, she fairly glided as if above the water, for at that length, there is zero hobbyhorsing in small chop. We stayed out of the way of the great wooden yachts circumnavigating Conanicut Island, reaching off at speeds unimaginable by the designers and builders of those ancient machines, then zooming back in to the fleet for a closer look. 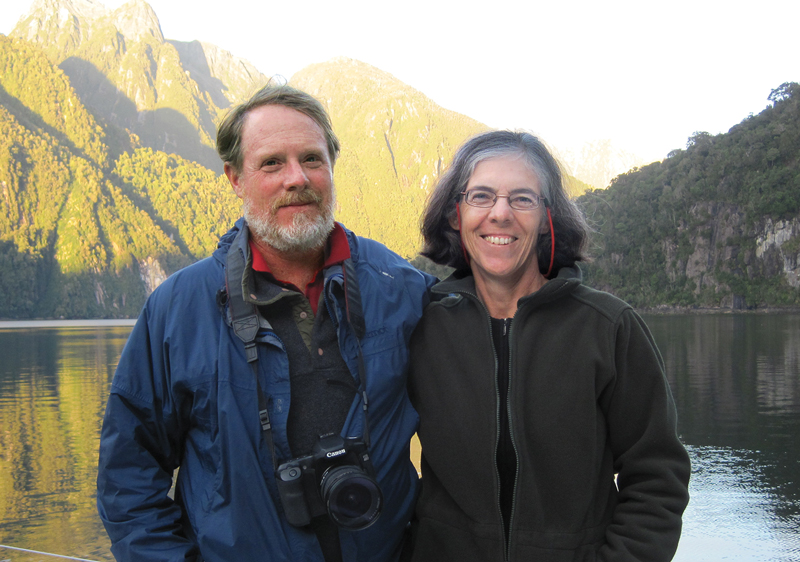 Chris White and his wife, Kate, have run a successful small design business in South Dartmouth, Massachusetts, since 1983.

Over the years White, now 65, has developed his own concepts, working more with catamaran hullforms, as they are more marketable than trimarans. His unique design stamp is a cockpit forward of the pilothouse and aft of the mast, which affords superior views of the sails. Performance is a feature of White’s designs, so he walks the fine line between speed and safety—many production cruising catamarans are under-rigged to discourage capsize. His designs range from the Discovery 21 (6.4m) trimaran daysailer, built by Aquidneck Custom Composites in Bristol, Rhode Island, to the beautiful Atlantic 72 (22m), from the same builder. All White’s designs, including the popular Atlantic series, are built in epoxy/fiberglass/carbon composites for strength, rigidity, and light weight. 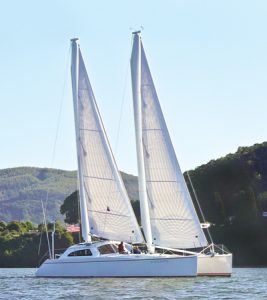 Because of the weight of fully battened
large-multihull mainsails, the difficulty handling them, and the risks associated with jibing, White offers the MastFoil rig—two-masts with roller-furling staysails set
on self-tending booms.

A somewhat recent development is White’s MastFoil rig featuring two rotating wing spars, each with staysails sheeted to booms to make the sail plan completely self-tending. Noting the inherent shortcomings of mainsails—inefficiency, risks associated with jibing, and time needed to douse in the event of a sudden squall—White asks: “Why not just get rid of the mainsail?” Conventional sloop rigs are, of course, also available and perhaps preferred by most customers, but the MastFoil offers an alternative for those daring to try something different, if not entirely new to the world of sail. White says he has noticed so many big boats in the West Indies setting just headsails, because the big, heavy mainsails are too much work to raise and douse. Rigged with what are in essence two jibs on electric furlers, one can be sailing moments after casting off a mooring. Light-air sails—spinnakers and screechers—are options.

Most of White’s recent builds, plus the spars, have been built at Alwoplast Marine in Chile. The patented MastFoils are carbon tubes inside a non-loadbearing ¼“/6mm-wall-thickness foam/carbon airfoil, supported by bushings. In the absence of an autoclave, the carbon spars are made with wet laminate. Hull construction is foam core/epoxy/glass with some carbon in high-stress areas. “They make everything there,” White says. Alwoplast has built eight Atlantic 57s during the seven years they’ve collaborated, this after an earlier builder in South Africa “imploded.” (Read Nigel Calder’s update on South Africa’s catamaran builders).White says Alwoplast had enough jobs in the pipeline when the 2008 recession hit to get them through to 2010 and beyond.

When we spoke last spring, White was heading to Bequia, a Grenadine island, with a customer on a 72‘ (22m) catamaran. The boat weighed 33,000 lbs (14,949 kg) when launched light and now weighs around 43,000 lbs (19,479 kg) fully loaded, which includes all the amenities designers are accustomed to adding during the build and fit-out—plus an ice cream maker. Yet, the skipper says, even with a fairly conservative rig, the boat routinely sails at 18 kts. 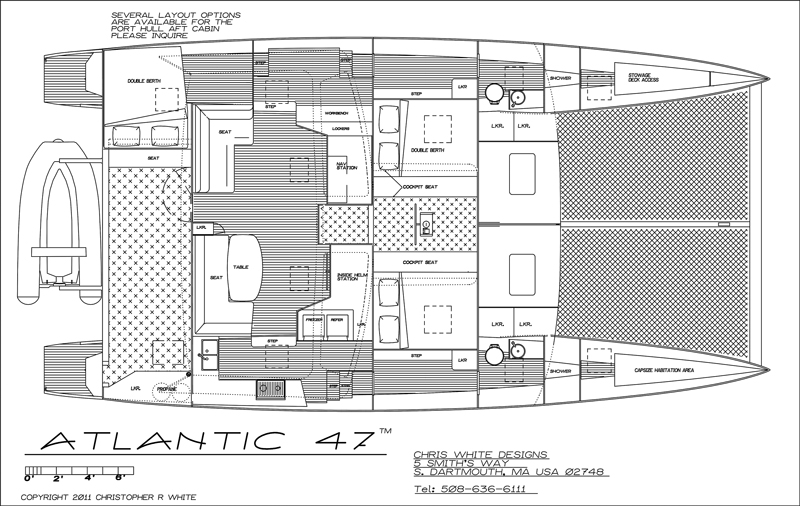 With its considerable beam, the Atlantic 47’s
(14.3m) accommodation plan incorporates three doubleberth staterooms, a spacious saloon, and an inside steering station alternative to the outside helm in the forward cockpit.

Working with a standard basic structure of amas, bridge, and pilothouse, each White design is custom. He works closely with the builder and owner, charging a percentage of the build cost. Owners of custom yachts are willing to pay to get what they want, and White’s customers get a handsome multihull yacht with sparkling performance. White is firm in his beliefs, and while he, like all designers, must bend to some customer demands, there are aesthetic and performance lines he won’t cross; if he did, the results wouldn’t showcase those beliefs.