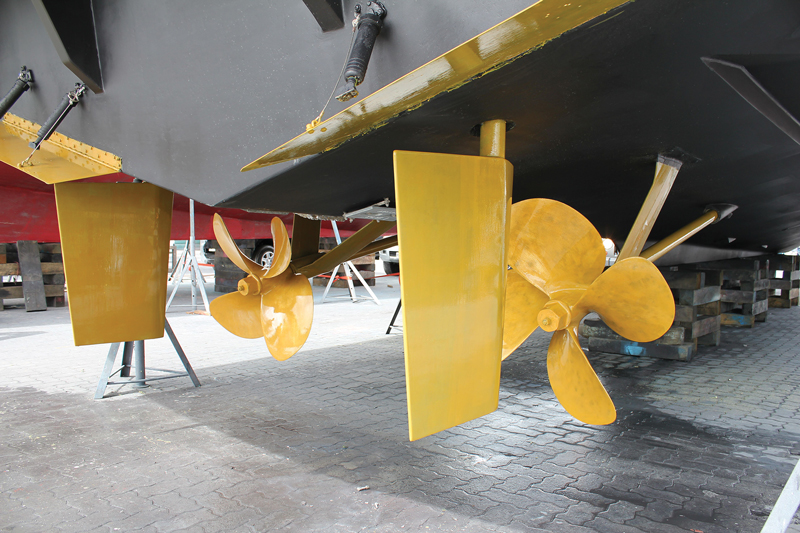 While living and keeping a boat in Newport, Rhode Island, I never had much problem with barnacles fouling props. My boats were hauled each fall, and each spring the bottom was sanded and fresh antifouling paint applied to the hull and running gear, so I was not in dire need for products like Propspeed.

The last four years, however, we’ve kept a 36‘ (11m) sailboat at a small marina on Longboat Key, Florida. The water is shallow, and at low tide a nearby mud flat is covered with mollusks. One day last fall, while motoring away from the dock, I was startled to make no more than a single knot forward speed, despite increasing rpm. Fortunately, our athletic son was with me. Suspecting growth on the prop, we anchored so he could dive over the side with facemask and paint scraper. Sure enough: a mega encrustation of barnacles, the result of our not having been aboard for several summer months. After repeated dives and a few breaks to catch his breath, he said it was as clean as it was going to get. Under way again, we resumed normal cruise speed of around 7 knots. It was a reminder to regularly schedule one of the several local scuba divers specializing in cleaning bottoms and other underwater fixes. In fact, I soon dis­covered that several others in the marina are on regular schedules with a diver, like trash pickup or newspaper delivery.

The problem, as most yard hands will tell you, is it’s difficult keeping paint on a prop—the more it’s used, the shorter the time the paint lasts. The less a boat is used, the worse the growth. To address this persistent problem, a New Zealand company called Oceanmax developed a product called Prop­speed, which is gaining popularity. According to Maria Pazos, who handles public relations for the company, it was first distributed in the U.S. in 2002. I am seeing more hauled boats with the signature gold color props and running gear.

It’s not antifouling but rather a superslick “foul release” film, so there is no harm to aquatic creatures. It’s meant to last at least a year, maybe longer depending on how often the boat is operated, temperature of the water, and environment. It does not diminish when out of the water. Professional application is recommended.

Application must be performed correctly, as the bond to the metal prop is critical. Follow the specific instructions, especially the timing of the several coats: two etching coats and the final clear coat. With only 3–5 minutes allowed between all three (in 8°C/40°F), one must have all product components on hand. Kits are available in several sizes, and include alcohol wipes, a proprietary wipe, and stir sticks. Props must be sanded clean with 80-grit paper. Do not cover zinc anodes.

Prop speed requires vessel movement to keep fouling organisms from attaching to the blades, so boats that sit for long periods may be better served with an ablative antifouling coating.