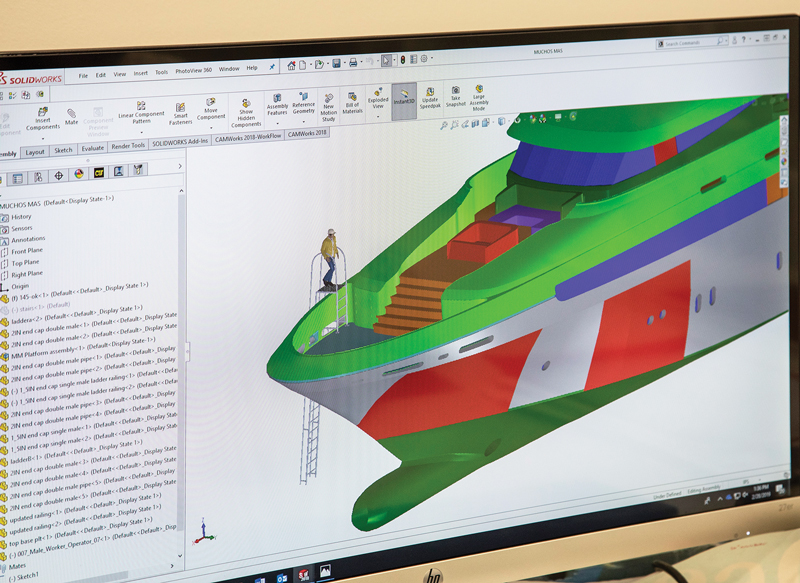 A project is shown in Solidworks at All Points Boats.

Nate Goodwin, who founded All Points Boats (APB), a big-boat repair facility at Lauderdale Marine Center in Florida, introduced himself at IBEX when it was held in Fort Lauderdale. He pulled me off the exhibition floor saying, “I want to show you what we’re doing.” He was proud of what he’d accomplished and aggressive, but not in an annoying manner. He seemed to know that if he didn’t promote himself and his crew, no one else would.

In PBB No. 93, I described my tour of his several shops on the edge of LMC’s big-yacht property. The projects I saw included a Sea Ray 50 (15.2m) repower, a 70‘ (21.3m) carbon boom repair, a hull lamination for Magnum Marine, and warranty work for West Bay SonShip. “We do anything!” he said. 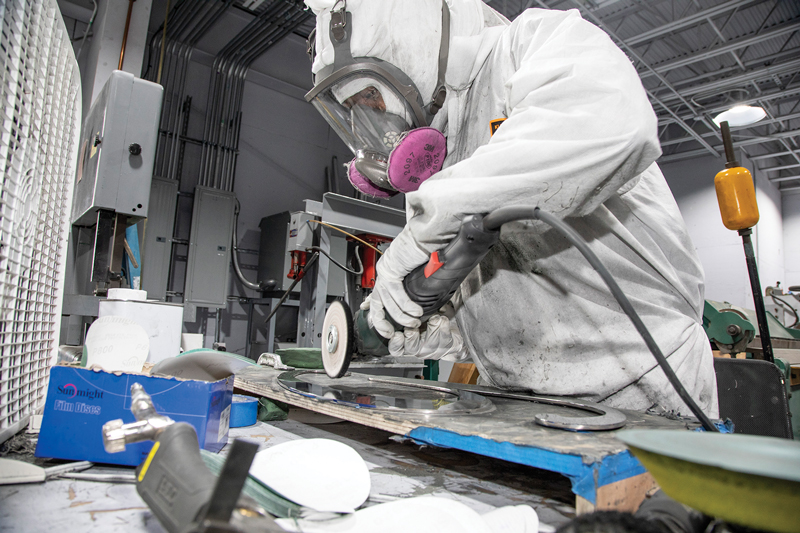 Courtesy All Points BoatsWell protected with safety gear, a metal-shop worker surface-finishes a part with film abrasivesSupplies were still stored in the containers he worked out of before acquiring shop space in the sprawling complex. That was in 2004. I returned 11 years later to find his enthusiasm hadn’t dampened (PBB No. 157). He had taken on investment and management partners to expand All Points Boats’ services that now included pipefitting, cabi­netry, welding, and metal and composites fabrication. The jobs were still diverse: cutting the bottom out of a 140‘ (43m) sportfisherman to drop out a blown 16,000-lb (7,257-kg) engine; repairing a damaged 1,200-gal (4,542-l) water tank that had too few baffles; and repairing a hole in the hull of a big yacht that grounded at speed. Valve testing for class societies was a new specialty. 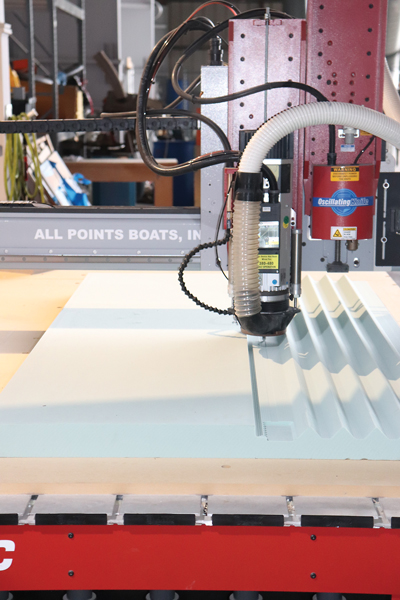 Just recently, Goodwin called to tell us about even more expansion in the past four years. “We have completely outfitted our shops with the addition of a new 20‘ by 10‘ [6.1m by 3m] 5-axis Flow waterjet, a 300-ton Accurpress shear, and CNC brake press, a Davi CNC plate pinch roller, and an AXYZ CNC 3-axis router for the composites and wood workers. In addition, we installed two new down-draft spray booths and completely revamped our machine shop and valve-testing shop.” He said the expansion, which included acquiring an adjacent building to boost square footage to 30,000 (2,790m²), cost $3 million. Annual sales now top $10 million.

Billing it as a one-stop shop for superyachts, business development director Dan Bornarth says APB has the area’s largest team of Lloyd’s- and ABS-certified welders, pipe fitters, and composite boatbuilders. Among the materials they are certified to weld are aluminum 6G unlimited, 316 stainless 6G, copper nickel, carbon steel, superalloys 254 SMO, AL-6XN, Inconel, and titanium. The crew now numbers around 80. And recently they became certified to install Seakeeper stabilization systems.