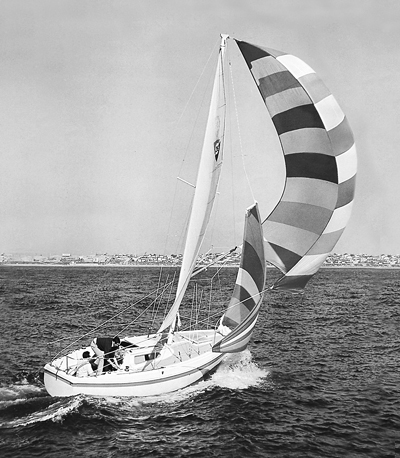 Not long ago I was speaking with Rob Valdes, service manager at Sailor’s Wharf boatyard in St. Petersburg, Florida, and asked if he was the same Rob Valdes who co-founded Endeavour Yachts in the mid-1970s. He said, “No, that’s my father.”

I called Rob Valdes Sr. the next day and had a pleasant conversation about his lifelong career as a boatbuilder. Valdes, now 80, said he’s been building boats since he was a teenager in Southern California. He and his brother Dick, now 84, built a 30‘ (9.1m) double-planked mahogany sailboat on their parents’ property in the San Fernando Valley. “We had to chop down a bunch of walnut trees to get it out of there,” he chuckled. At age 19 he worked in R&D for Bill Tritt’s Glaspar company in Costa Mesa. During the 1950s, Glaspar was the largest boatbuilder in the world, cranking out 10,000 units a year. They also built the first fiberglass mast in 1947.

Products were diversified, including FRP tops for Porsche and MG sports cars. Valdes laid them up and sprayed to color-match the cars. “We did lots for movie people,” he said, notably the Porsche 550 Spyder that actor James Dean was driving when he was killed in 1955. After military service, Rob joined brother Dick in his new enterprise—Glas Laminates, which became Columbia Yachts when they took on Vince Lazzara as a partner/investor. The company built sailboats up to 50‘ (15.2m) and quickly became the largest producer of fiberglass sailboats in the world. “We cranked out a 30-footer every other day,” Valdes said. Builders in six countries—among them Spain, Ireland, France, and Japan—were licensed to construct their designs, the famed “blister tops” by Bill Tripp. To meet demand a plant was established in Portsmouth, Virginia, and Rob was sent east to manage it.

Moving from California to Florida

When Columbia was sold to the Whitaker Corp. in 1967 (which also owned Bertram and Riva), Lazzara and Valdes eventually moved on to Florida, Valdes working at Lazzara’s newly formed Gulfstar facility in St. Petersburg. After two years Valdes left to team up with former Irwin Yachts salesman John Brooks to start Endeavour Yachts. Their first build was a 32‘ (9.8m) sloop, formerly the Irwin 32. The tooling was “just lying there” out back of the Irwin plant, and Ted Irwin sold it to them for $10,000—no royalties. The partners sold 600 units. Emboldened, they took tooling for the Creekmore 34 (10.4m) that they found along the Miami River banks, cut it in half, added 3‘ (0.9m), and sold 476 units as the Endeavour 37.

As the company grew, it built mostly center-cockpit boats for the charter trade. It also tried to overcome a reputation for stodgy performance by hiring Johan Valentijn and Bruce Kelly to design faster boats like the Endeavour 33, 35, and 38 (10.1m, 10.7m, and 11.6m). Where decks had been cored with squares of plywood, they turned to Klegecell closed-cell polyvinyl foam and “a multi-axial steel-reinforced force grid bonded to the hull,” according to an old brochure. Later they dropped the foam core for end-grain balsa. By the end of the ’80s, Endeavour had 50 employees turning out 100 boats a year. Valdes says the business was sold in 1996 or ’97 following some collaboration with multihull developer Bill Symons. John Brooks was killed in his home in 1996, apparently as the result of an attempted burglary.

Valdes wasn’t through building boats though, electing to develop 38‘ and 54‘ (11.6m and 16.5m) sportfishing boats under the name Mediterranean Yachts in Largo, again with brother Dick.

“We’ve done everything that can be done in fiberglass,” Valdes said confidently.

Rob took Dick to the Fort Lauderdale Boat Show one year, and they stepped aboard a 42‘ (12.8m) Riva. Dick asked the salesman how much it cost. “Two million.” Dick told the salesman, “I remember back in the ’60s, flying to Italy with the VP of Whitaker to buy Riva. We paid $1.5 million…in cash we carried in a suitcase. That’s the way we did business back then. And paid less than the cost of one of your boats today.”