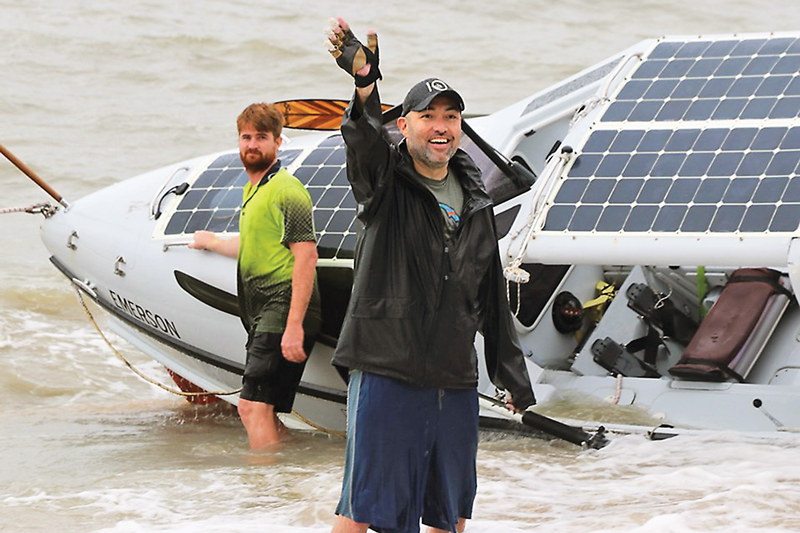 After 336 days at sea ex-fighter-pilot Jacob Hendrickson beached his Eric Sponberg-designed rowboat on the shore of Queensland, where a small group of curious Australians greeted the happy voyageur.

One of the more intriguing Design Briefs we’ve published is on the 28‘ (8.5m) rowboat designed by University of Michigan–educated naval architect Eric Sponberg (see “Ocean Rowboat,” PBB No. 161). In his description of the project, Sponberg told of being contacted by U.S. Air Force fighter pilot Jacob Hendrickson, who after 10 years flying Warthogs in Afghanistan, was nearing discharge and wanted to row across the Pacific from Washington State to Australia. The project came to a successful conclusion June 8 when Hendrickson landed on the Queensland shore. As it happened, Sponberg and his wife, Arliss, circumnavigating on a 35‘ (10.7m) sloop of his own design, were on hand to greet him. Emerson was Sponberg’s last design before he retired to sail around the world on Corroboree, his first design. He purchased her from her longtime owner several years ago, capping a 43-year career in naval architecture and yacht design. Let’s hope he and Arliss’s adventure ends as well as Hendrickson’s.

Backing up, Sponberg, who is also partial to recycling old boats, see had some experience with oceangoing rowboats, having designed one years earlier. With Hendrickson’s commission in hand, he quickly researched previous Atlantic and Pacific crossings. He found, for example, a fast passage made by John Breeden, who covered the 7,400-nm distance from San Francisco to Cairns in just 209 days. In 1971–72 John Fairfax and Silvia Cook took 361 days. British rower Peter Bird perished in a 1996 attempt.

“The first big design question,” Sponberg wrote, “was figuring out how long Hendrickson would be at sea, because that determines the size of the boat.” For an average of 26 nm per day, Sponberg wrote that he’d have to plan food and other provisions for a 238- to 350-day passage, quite a spread. His calculations and discussion of hullform make for an interesting read. The specifications he eventually settled on were 28‘ x 5‘ (8.5m x 1.5m) with a displacement of 2,587 lbs (1,172 kg) and the ability to carry 500 lbs (227 kg) of supplies and 1,000 lbs (453 kg) of food.

Schooner Creek Boat Works of Portland, Oregon, was selected to build the boat; named Emerson, the carbon fiber/Divinycell foam build was described in PBB No. 172 (“Tooling and Techniques from Schooner Creek,” page 56). 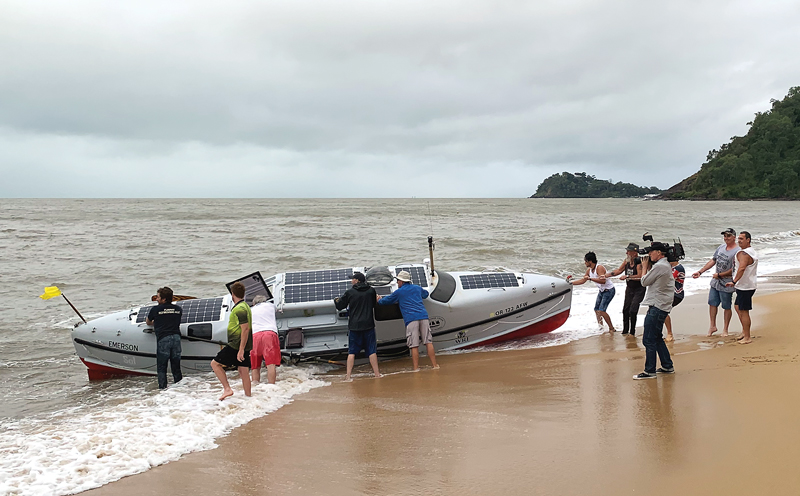 The 28′ (8.5m) carbon fiber boat was designed by naval architect Eric Sponberg and featured in Professional BoatBuilder No. 172. Sponberg, who is circumnavigating with his wife, Arliss, was on hand to meet Hendrickson.

In announcing Hendrickson’s arrival, Sponberg e-mailed us: “As luck would have it, Arliss and I had arrived in Bundaberg, Queensland, Australia, just 16 days before Jacob. Last week we hired a car and drove about 900 miles [1,448 km] north to Cairns to be there when Jacob arrived. A great time was had by all with Jacob and his support team. Jacob and I also made an appearance on Australian television from the beach and later from the dock at a nearby marina where Emerson and Jacob were towed after he landed on the beach.”

It took Hendrickson 336 days to row across the Pacific on an anything-but-straight route, as the winds were a major, uncontrollable factor in his progress, despite excellent electronic communications that included weather routing.

When I asked Hendrickson via e-mail what changes, if any, he’d make to the boat based on his experience, he answered: “The boat handled wonderfully in calm conditions, and handled well enough in higher winds/seas to get the mission done, but I probably could’ve made life easier if things were a bit smaller/simpler. If I were to start from scratch, I’d remove the bubble top and most of the windows. I’d shorten the forward cabin (less windage). I’d remove the ventilation system (too much power and too loud). I’d probably split the electrical panel in two and mount on the forward bulkhead to even the weight. I may shorten to 26‘ [7.9m]. I’d improve the drainage system of the rowing area, and I’d completely eliminate the center footwell (it was constantly full of water). I’d simplify the internal lighting system or remove entirely (you really only need a headlamp), but I would probably add an integrated VHF radio (all I had was a handheld). Lastly, I’d increase my rudder authority.

“The boat is remarkably stable. I was hit broadside by a decent size wave (it was tall enough to temporarily block the rain); it rolled Emerson close to 90°, but there was zero hesitation getting back to vertical. That’s one advantage of the size/weight, however, the windage caused some directional control problems at times. For example, on my last day, the wind was from the S/SE at 20–25, and I needed to go west. Add in additional squall winds, and I missed my final turn by ~10° CMG [course made good]. With the described cutbacks, maybe I could’ve made that turn no problem.”

Asked about a broader perspective on being on such a small boat on such a big ocean for so long, he said, “I was pleasantly surprised by the sheer volume of wildlife encounters. There wasn’t a day that passed without something beautiful to witness. It gave me a wider perspective on what it means to live on Earth.”

And perhaps as a prelude to future inspirational speeches, he concluded: “It taught me that if your soul is drowning in the mundane, if you’re tired of ignoring that inner voice yearning for something more, just remember: This is your life; only you can decide. Set your sights being true to your heart and get to work; who knows what heights you’ll achieve. But one thing is certain, you’ll have learned what it means to truly live, and that is priceless.”