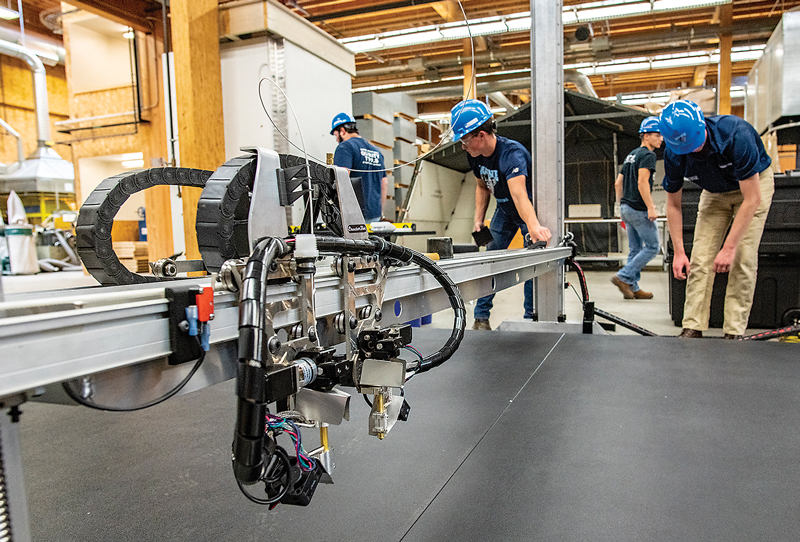 A team of staffers and students at ASCC assemble the frame and components for a medium-scale 3D printer, manufactured by ErectorBot to ASCC specs and installed last summer.

Longtime editor Paul Lazarus’s deep dive into the capacities and promise of the University of Maine’s Advanced Structures & Composites Center in “Large Print,” Professional BoatBuilder No. 181, spurred him to look back on the magazine’s ongoing coverage of tooling for marine composites. What follows is his accounting of our most notable attempts to keep readers current on the subject over the past 30 years, with links to those articles where possible.         —Aaron Porter, Editor 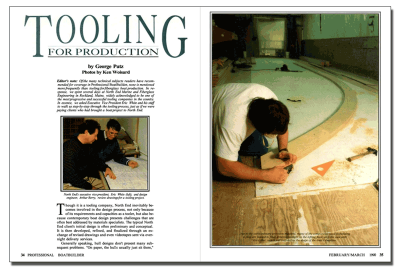 Within a few months of this magazine’s launch in October 1989, Professional BoatBuilder’s readership, freshly surveyed, requested a feature on tooling for fiberglass boats. We responded with the cover story for PBB No. 3 (February/March 1990). Written by marine journalist George Putz and photographed by Ken Woisard, “Tooling for Production” provided PBB’s first close look at a process critical to the modern marine industry in both its recreational and government/military manifestations. Putz and Woisard spent several days documenting the operation at North End Marine & Fiberglass Engineering, in Rockland, Maine, a premier shop with a blue-ribbon client list of boat manufacturers. (North End also fabricated finished production-fiberglass parts, including full hulls and decks.) Precision tooling at the time involved a high degree of craftsmanship—much of it manual, in wood, as shown in that article. 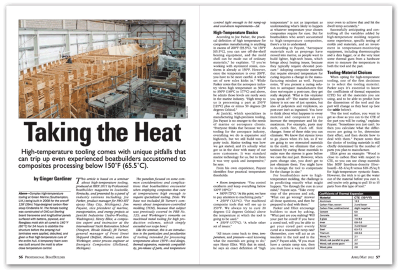 Two decades later we published another seminal article on composite tooling, titled “Taking the Heat,” written by Ginger Gardiner (PBB No. 136, April/May 2012). This piece was adapted from an information-rich panel discussion at the 2011 edition of IBEX, an acronym for the seminar-program/trade-show started by the magazine in 1992. Gardiner, a veteran composites technical writer/marketer (and wife of master boatbuilder Jim Gardiner), analyzes the advantages and pitfalls of high-temperature tooling, and presents a detailed picture of CNC (computer numerically controlled) tooling.

A third significant story on tooling—“Just Print It!” by PBB editor-at-large Dieter Loibner, the magazine’s first in-depth coverage of 3D-printed molds—appeared in No. 175 (October/November 2018). While we’re still early in the development of printed thermoplastic tooling, Loibner’s article offers a step-by-step account of “additive manufacturing”—as distinct from the “subtractive manufacturing” exemplified by shaping foam blocks using computer-controlled router bits. The follow-on issue, PBB No. 177, contains a Letter to the Editor plus responses from Loibner’s protagonists on important fine points—in retrospect—regarding the tooling project described in the article. 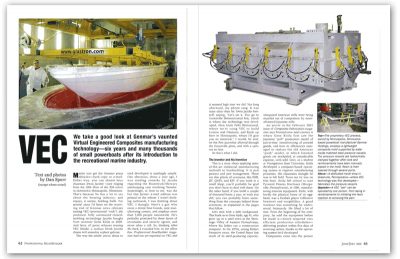 Several additional articles of interest—providing a comprehensive perspective over time, on thermoplastics in composite boatbuilding—are banked in the digital archive. PBB Nos. 10  and 11  (April/May 1991 and June/July 1991) presented Dick Cadwalader’s well-researched two-part series on exploiting thermoplastic technology of the day. Then, in PBB No. 54  (August/September 1998), Martin Grimnes, founder/CEO of Brunswick Technologies Inc., manufacturer of advanced fabric reinforcements for the marine and other industries, wrote a Parting Shot titled “Fast Forward,” in which he presciently predicts “…we will be confronted with a rapidly developing thermoplastics technology featuring totally new processes.” Finally, in PBB No. 101  (June/July 2006), editor-at-large Dan Spurr, in a sidebar titled “The End of Gelcoat?” within a main article on Genmar’s proprietary VEC (Virtual Engineered Composites) technology, discusses a thermoplastic finish film called VEC Shield.