Burmese teak has been the standard boat deck material for centuries, but that won’t likely be the case much longer, courtesy of a new modified-wood product called Lignia.

Increased demand for the durable but easily worked tropical hardwood, coupled with shortages in older growth teak in the marketplace, has led to some high-profile instances of fraud and timber theft in the Southeast Asian country of Myanmar (formerly Burma). Also, some boatbuilders have knowingly or unknowingly sourced teak in contravention of their best intentions and, in some cases, of European timber regulations. 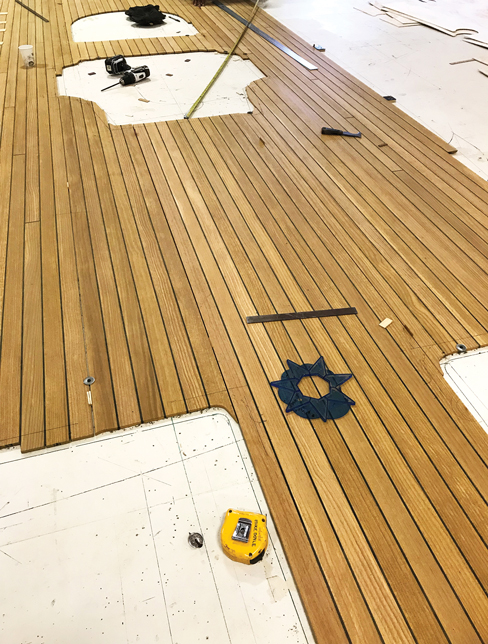 At Teakdecking Systems (Sarasota, Florida) panels of a premanufactured
deck are laid out for the first time in Lignia—a modified wood product from the United Kingdom engineered to closely mimic the properties of teak.

When I visited Teakdecking Systems (TDS) of Sarasota, Florida, in 2016, management at this leading manufacturer of teak decks for custom and production boatbuilders was grumbling about the concessions in accepted quality the company had been forced to make as their buyers on the ground in Myanmar found high-grade timber harder and harder to source (see “The Tech of Teak,” PBB No. 165). Even then, company vice president Alan Brosilow knew the writing was on the wall for the volume of teak TDS requires to meet its demands for consistent-quality marine decks. At the time, he showed me the synthetic decking options they were trying out as alternatives but not replacements for teak decks. While Esthec and Herculan Marine Flooring are still available from TDS, they haven’t come close to relieving the pressure on teak forests from boatbuilders. Like other synthetic decks, they just aren’t the same as wood. I’ve talked with multiple designers who like the idea and some even like the look of synthetic decks, but they hesitate to spec them based on aesthetics, tradition, and the reputation that many wood alternatives have for retaining so much heat that they’re uncomfortable to walk or sit on.

Since early 2019, Brosilow has been talking to me about Lignia, a proven alternative modified-wood product TDS is now validating for use in its pre-manufactured boat decks.

Produced in the United Kingdom (Barry, South Wales), Lignia is specifically developed to replace teak in aesthetics and material properties. The treated wood starts out as plantation-grown clear radiata pine. For the producer’s specified yacht decking, they select large logs that can be quarter-sawn and kept clear of any sapwood and visual defects. The process that converts Lignia’s softwood into a teak alternative is patent-pending and proprietary, but the company explains that the selected wood is impregnated with resin, dried, and subjected to high temperatures and pressure to cure the resin, locking it in place. Resistance to rot and fire is improved, and, like fresh-worked teak, the wood surface starts out a golden tone that will gray or silver with time and exposure to the elements.

After treatment, the wood can be milled and worked much like teak or other hardwoods of 650 kg/m3 (40.6 lbs/cu ft) density. Predrilling for fittings is recommended to avoid splitting. Conveniently, the processed wood shares the same weight profile as teak, which means designers and builders can swap it out in a boat plan without redoing weight studies.

While Lignia (the company) has been refining and testing its product for years, and boatbuilders including Spirit Yachts have built decks with the material, Brosliow said Lignia decks from TDS are almost ready for prime time. As this issue headed to press in mid-August, he said a large shipment of production-run Lignia wood sourced from three different mills was being cut and selected in the shop for the first TDS Lignia deck installation on an eco-tour boat in Sarasota.

As part of the verification process that the new material will be fully compatible with the TDS panelized decking model, he noted that most of the material is very good quality quarter-sawn and clear grained, but he had seen some variation in consistency in wood from the different mills. Of course, selective sorting is nothing new to TDS, which has been routinely grading and specifying teak for a wide range of uses. To date, TDS reports that Lignia has favorable color results from weathering, resists surface erosion, responds well to the company’s liquid cleaner, and is fully compatible with its caulk and epoxy products.

The promise of Lignia to TDS is that it’s the first true wood alternative to Burmese teak for yacht decking. On the strength of its testing and early use, TDS has signed a formal joint agreement to distribute the material in North America and the Caribbean. That’s good news for boat designers and custom and production builders who are looking for a renewable alternative with the quality, consistency, and efficient production that have defined TDS’s reputation.