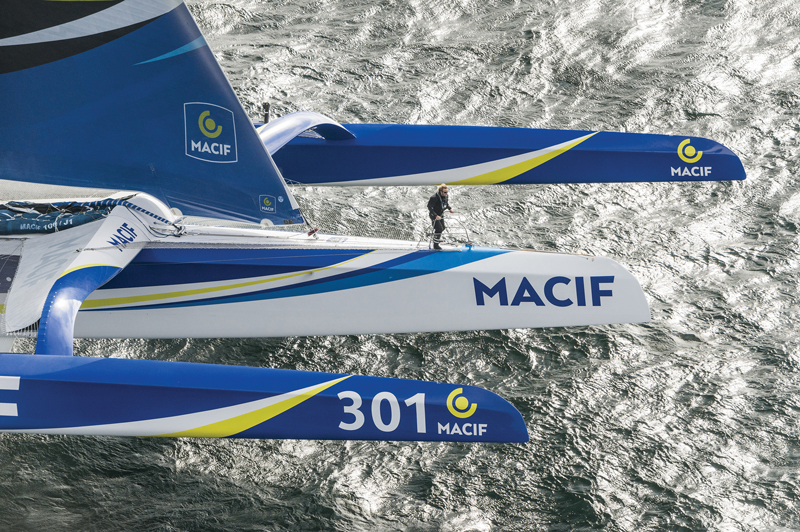 Macif is one of several 100′ (30m) trimarans belonging to the unique Ultime class of yachts designed solely to smash ocean racing records.

In a 1956 movie, Phileas Fogg (played by the quintessential Brit David Niven) won a bet that he could travel “Around the World in 80 Days.” The “most punctual man alive” traveled by all modes of transportation, including trains, steamers, and even elephants. The challenge so intoxicated the sail-loving French that the Jules Verne Trophy was created, named for the author of the 1873 novel upon which the movie is based. Bruno Peyron first and narrowly accomplished the feat in 1993, aboard the catamaran Explorer, in a time of 79 days, 6 hours.

At least nine times this amazing record has been shortened, most recently in 2017 by Francis Joyon, who nearly reduced by half the elapsed time; he and his crew claimed the Jules Verne Trophy by finishing in 40 days, 23 hours. But as offshore sailors never shy from adding pages to the Guiness Book of World Records, that same year 34-year-old François Gabart ticked off 27,859 miles in 42 days, 16 hours—solo! This slashed 6 days and 10 hours off the solo record set by Thomas Coville a year earlier.

Gabart’s ride is a member of the newly emerged Ultime class of 100‘ (30m) multihulls, whose sole purpose is to break more records (it grows tedious with times measured between hours of the clock, between the three great capes, and so on). Macif, named for the insurance company that paid the $25 million tab, was designed by VPLP (see “Flying Machines, Part II,” PBB No. 91) and built by CDK Technologies in France, in 2015. The boat, with wave-piercing bows, is carbon, cooked in a 35m (225‘) autoclave. The rotating wing mast can be canted to weather.

Of course, records are meant to be broken, and if the holder doesn’t improve, someone else will take over. Not wasting a moment, Macif underwent a six to seven months refit by CDK and its subsidiary in Lorient, Keroman Technologies. According to reports, and with the assistance of MerConcept, the company Gabart created to manage his and other campaigns, optimization included new foil casings, new rudders, new horizontal foils on all three rudders, L-shaped retractable foils on the floats, or amas, a modified centerboard, and a lighter-weight sandwich boom. Gabart, speaking to sail-world.com: “We realized that it is very interesting to sail the boat a little more ‘on its nose’ or flat when foiling. To achieve this, we moved the boat’s centre of gravity, by moving considerably heavy items, such as the engine for example…I think that it is going to improve our airborne performance.”

Back to the shop for upgrades

She was relaunched last July to compete in the Route du Rhum from France to Guadeloupe, in the Caribbean, losing to another Ultime trimaran, IDEC Sport, skippered by Francis Joyon, by 10 hours. So, after returning to France last January on a cargo ship, she went back into the yard for attention to some systems that had failed. Performance is a moving target.

Next up: the double-handed Brest Atlantiques that begins November 3, 2019, and covers some 14,000 nm from Brest to Brest, rounding two islands in the South Atlantic, one off Rio de Janeiro and the other off Cape Town, South Africa.