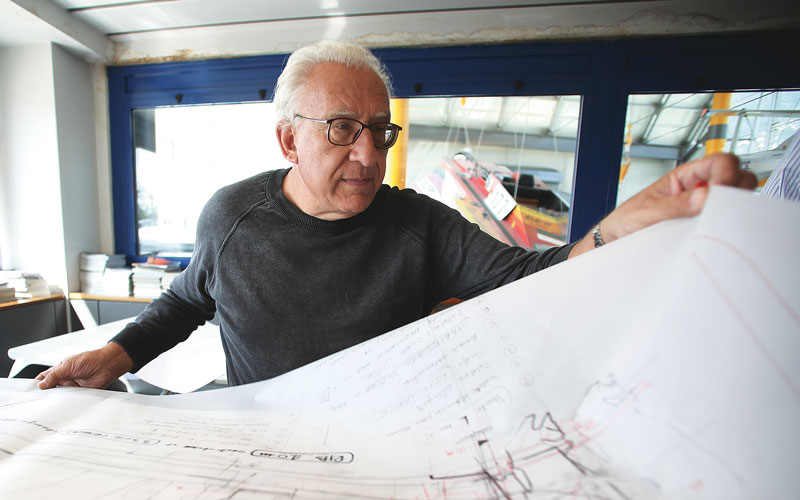 Fabio Buzzi redmarks a set of engineering drawings for further revision, in his office at FB Design in 2011.

Live by the sword, die by the sword. The legendary offshore powerboat racer and boatbuilder, Fabio Buzzi, died September 17 off Venice, Italy, while attempting to break another speed record in a 65’ (19.8m) boat of his own design and build. He hit a barrier of rocks installed to protect a dam placed to prevent flooding of the city, apparently misjudging entry to the lagoon on the other side—passage he surely had made many times. The boat reportedly flew 100’ (30m) in the air before landing on the water and sinking, instantly killing Buzzi and two crew; a fourth was taken to a hospital. Buzzi was 76. 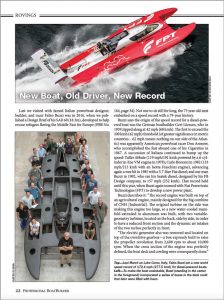 Retired powerboat racer and builder of offshore powerboats, Allan “Brownie” Brown, said Buzzi was an “engineering genius” who made “thousands of advancements in marine propulsion.”

Professional BoatBuilder has published numerous articles by and about Buzzi. Most recent was an account in this column (PBB No. 175) describing a record run for diesel-powered boats—172.4 mph (277.5 kmh) running a 1,800-hp (1,350 kW) Fiat Powertrain Technologies engine and a prop turning at 10,000 rpm. Just the latest in a remarkable career.

In PBB No. 164 Buzzi wrote a Design Brief for a 60’ (18.3m) Search & Rescue designed and built by his FB Design company in Annnone Brianza, Italy; its purpose: to rescue refugees from the Middle East that too often drown in the Mediterranean Sea while fleeing to Europe. It incorporated FB’s patented 3TAB control system that enables the boat to plane with a heavy payload; it averaged 52 knots over 1,200 nm from Monte Carlo to Venice during one test run. 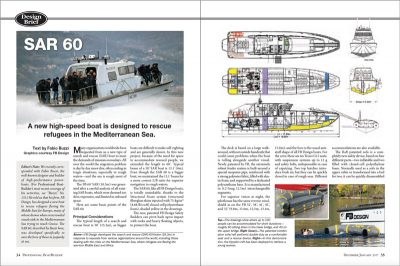 A graduate of the Polytechnic University of Turin, Buzzi holds more records than one could fit in one of his super special raceboats, like his sentimental favorite, the 47’ (14.3m) Cesa, built in 1984, that soon after won 17 races in a single year, including the European, UIM world championships, the APBA offshore world championship at Key West, Florida, and the Miami-Nassau-Miami Race. In all he holds 40 world speed records, 55 world championships, and eight Harmsworth Trophys. No one else comes close. Not included above was a 1994 victory in the 1,700 nm Cannonball Run from Miami to New York City in his Tecno 40 (12.2m), a boat he designed, built, rigged with engines he engineered under the Seatek brand, turning his own Trimax props, and riding comfortably in Tecno bolster seats he helped develop. Vying for second were entries from Cigarette, Fountain, Scarab, Skater, and Donzi; Buzzi finished seven hours ahead of the next boat. 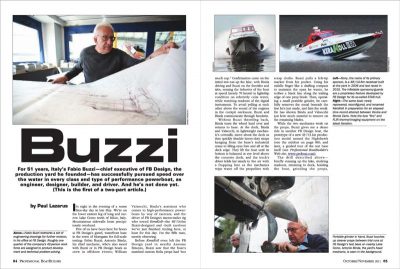 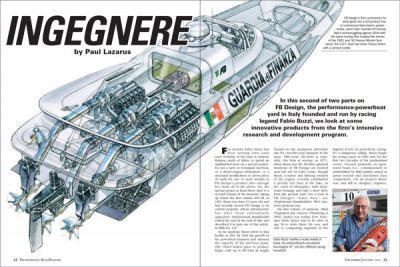 The FB Design facility is very large, with nearly 140,000 sq ft (13,020 m²) of covered space. Beyond the shops of the architecturally attractive building, which includes a 5-axis router with an 82’ (25m) working envelope, is a showroom of raceboats, offices, and outside, a test basin full of water. Billed as a high-speed research facility, Buzzi kept nearly everything in-house, excepting critical partnerships where necessary. As Paul Lazarus wrote in his two-part piece on Buzzi (PBB Nos. 133, 134), which were based on an extensive visit with him in 2012, for all projects Buzzi was the designer, engineer, builder, and test driver and/or throttleman. Committed early on to high-performance powerboat development, Lazarus wrote, “…he has always approached the subject systematically as a complete technical problem to be solved. The problem clearly involves numerous interrelated components: hull lines, structure, building materials and methods; engines, drives, and appendages; electrical and hydraulic systems, and electronics; crew safety capsules and equipment; detailed knowledge of class specifications and rules; race strategy and execution; plus variables over which Buzzi has little or no control—namely, race organizations, the behavior of other competitors, and conditions on a given course during the event.”

Wish we could say it was one of those conditions beyond his control that took his life…what went through his mind as he navigated his approach to Venice harbor we may never know. Fortunately, thanks to his memoir, Progetarre per Vincere (Planning to Win), and many other writings, we are able to learn some of what went through his mind during the preceding decades of unequaled achievement in the wonderful world of fast boats.

Here are more articles about Fabio Buzzi, going back to 1997, in Professional BoatBuilder‘s digital archive:

Dag Pike’s article in PBB 71, Jun/Jul 2001, on modified two-speed gearboxes developed by Buzzi for offshore racing and then for the recreational and military markets.