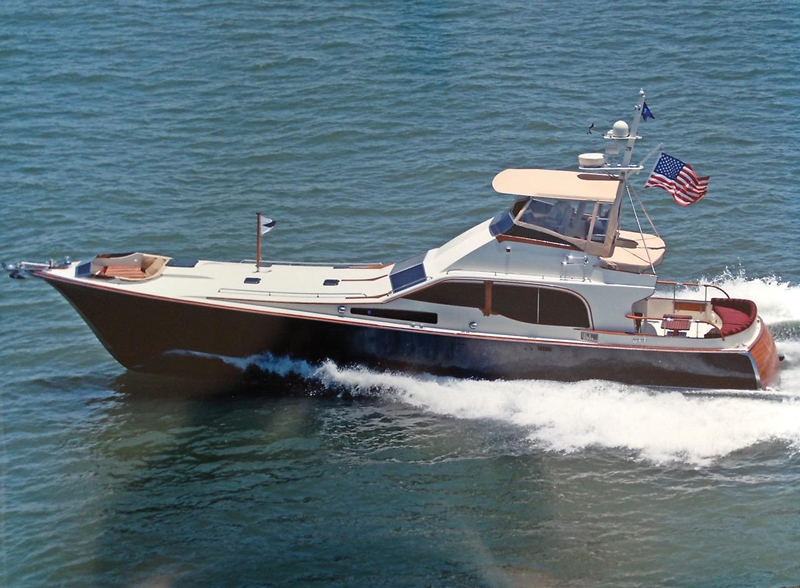 Tom Fexas’s most famous design was the retro-styled Midnight Lace, built by several yards in several sizes. The 52 (15.8m) is shown here. His writings are now available in book form.

Autobiographies and biographies of yacht designers are entertaining and occasionally instructive. The recent publication of Dick Carter’s and Ron Holland’s self-written stories (Dick Carter—Yacht Designer in the Golden Age of Offshore Racing, and All the Oceans, respectively) not only offer insight to those of us interested in design but also satisfy our need for nostalgia. But not all great designers wrote books about themselves and their bodies of work, or had a freelance writer devoted to them. Such was the misfortune of Tom Fexas, who died in 2006 at the age of 65. While he didn’t have time to tell his story, he amassed a considerable file of magazine articles, including a regular column for Power & Motoryacht. His widow, Regina Fexas, has compiled these and to date published two of an expected five volumes. Future volumes will include articles from Sea magazine, and a few “bonus” unpublished pieces.

Moonlighting as a designer

For those who don’t know of Fexas, he was a New Yorker, born in 1941 in Queens, a graduate in marine engineering from the State University of New York Maritime College, and the Westlawn Institute of Marine Technology. From 1965 to 1977 he worked as a nuclear project engineer for the Electric Boat division of General Dynamics in Groton, Connecticut. Yacht design was his passion and he applied himself to that interest off-hours. Though he would later produce hundreds of designs, many of superyachts for various builders around the world, his signature design was the Midnight Lace, the first 44‘ (13.4m) retro-styled motoryacht, introduced in 1978 and built by Cheoy Lee’s Golden Wave yard in Hong Kong.

In announcing publication of his articles in book form, Regina Fexas wrote us:

“Tom was a real ‘boat guy’. His life, since he was a kid, evolved around boats. He was either riding a boat, designing, reading or watching movies and documentaries about boats. If a movie had a boat, ship or submarine, he would watch it. He subscribed to every boat magazine that existed and he would read them, cut out the articles that interested him, and file them for future reference. He was a nice, humble person, always available to anyone who wanted to talk to him—he answered his phone at the office. At boat shows it always took forever to get anywhere because everybody would stop him to say hi or ask questions; he would answer them with a smile on his face, most of the time having no idea who the person was. He was also fun to be with, very knowledgeable and with a great sense of humor.

A passion for boats

“Tom’s designs ranged from 17‘ [5.2m] launches to 200‘ [61m] megayachts—inflatables, motoryachts, sportfishermen—full design, hull design, modifications, refits. His personal favorites were the vintage ones like Elco, Wheeler, and Consolidated. He worked with several builders: Palmer Johnson, Cheoy Lee, American Marine, Burger Boat Company, Derecktor Shipyards, Royal Denship, Knight and Carver, and Mikelson Yachts, which continues to build sportfishermen from Tom’s designs ranging from 43‘ to 75‘ [13.1m to 22.9.m]. Designing boats for him was not a job but a passion.

“I was married to him for more than 20 years and worked at the office—I ran it, he did the designs. I met Tom in Brazil while I was working at the boatyard that was building Priority, the 65‘ [19.8m] Midnight Lace. The owners were American and the boatyard needed a trans­lator to work with them and Tom.

“Publishing his articles in a book form was one of Tom’s projects but unfortunately he did not have a chance to do it; he was sick for a long time and passed away. So I wanted to do it for him but for the longest time I could not. It was too painful. Only last year I was able to read and enjoy the articles; it brought back wonderful memories. The magazines used to censor his articles but I used Tom’s files and did not compare them to the published ones.”

The books with Fexas’ writings are self-published and available from Amazon.com. Volumes I and II are $20 and $25, respectively. As Regina notes above, they are straight off his keyboard, unfiltered. Topics range widely, from a good-natured dissing of sailboaters to yacht owners who never use their boats and might be better off with a clever life-size plywood cutout occupying the dock of their waterfront Florida mansion. Each is a short, easy-to-read take on some aspect of boating, with Fexas often saying what others felt but never could say themselves.