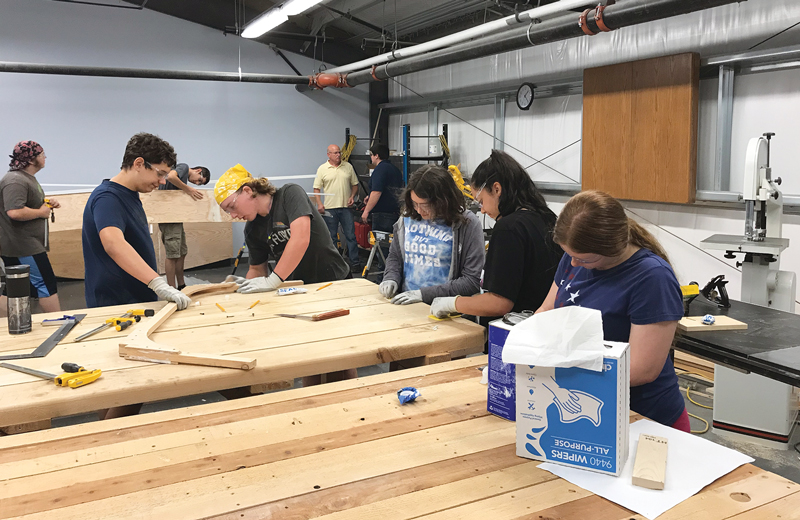 Teenage students who signed up for the Youth Summer Boatbuilding Program, a five-week boatbuilding class at the Community College of Rhode Island, got more than free training; each of the 13 also received a small stipend.

Rhode Island, along with Washington and North Carolina, has a keen awareness of how important boats are to its state economy. It treats boatbuilding companies favorably, recognizes the value of boat tourism, and supports training programs that feed these segments of the boating industry. In issues past, we’ve described the programs operated by the International Yacht Restoration School, or IYRS (that includes composites as well as wood), and now can add the Community College of Rhode Island (CCRI), which recently graduated its first class of 13 students who completed a five-week CCRI Youth Summer Boatbuilding Program.

A Program with Purpose

Funded by the Rhode Island Department of Labor and Training, and in partnership with the Rhode Island Marine Trades Association (RIMTA), the program taught basic skills free of charge to 14–16 year olds. Besides the free ride, each student at the Youth Summer Boatbuilding Program also earned a stipend. They cut, assembled, and painted two wood 15′ (4.6m) skiffs. CCRI public relations officer Michael Parente told us, “The students learned a lot about the boating industry, how to read blueprints, etc., and, most importantly, the importance of teamwork.”

The program was taught by Matthew Thayer, who spent two years at the International Yacht Restoration School’s boatbuilding program, where his experience included hands-on planking of the flagship Coronet, and building a Beetle Cat and Newport 15 (4.6m).

CCRI was established in 1960 as a two-year college offering technical and academic programs at four main campuses in Warwick, Lincoln, Providence, and Newport, plus a satellite facility in Westerly.