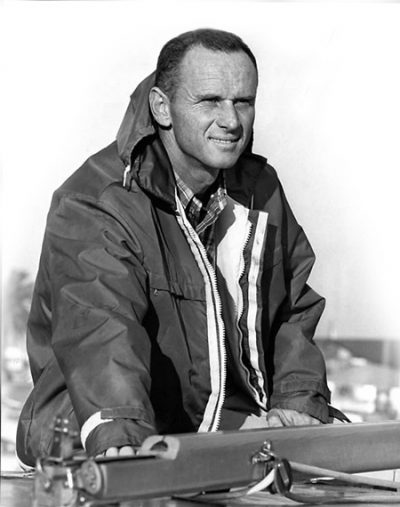 Lowell North, a sailing and industry icon, died last June at his home in San Diego, California. He was 89. For years, the Star class of one-design sailboats was considered one of the toughest and a training ground for skippering larger boats, like the 12-Meters once raced in the America’s Cup. Beginning in 1945 and for several decades after, Lowell North dominated the class. He won a World Championship that year, crewing for Malin Burnham; at the age of just 16 he’d also made the sails.

He went on to win numerous championships, including a gold medal at the 1968 Olympic Games in Mexico City. Nicknamed “The Pope,” he was trained as an aeronau­tical engineer and applied scientific rigor to his love of sailing and sailmaking. After founding North Sails in 1957, he sold the business in 1984 to Kohler, a maker of bathroom fixtures.

From sail loft to empire

Today with lofts in 29 countries, North Sails continues to develop new technologies, such as its 1992 introduction of 3DL sails, made of film on molds; rather than the sailmaker eyeballing shapes, these sails have scientifically aligned fibers that follow the load paths. And North Sails purchased rights to Thin Ply Technology from the Swiss company North Thin Ply Tech­nology in 2005 to make what it would call 3Di brand sails, including those for 2007 America’s Cup winner Alinghi. U.K.-based Oakley Private Equity acquired the company in 2014. Lowell North must have been proud to watch North Sails continue to evolve as the cornerstone of North Technology Group (NTG companies include Edgewater Power Boats, North Thin Ply Technology, and Southern Spars), guided by a commitment to the same scientific principles he had followed.