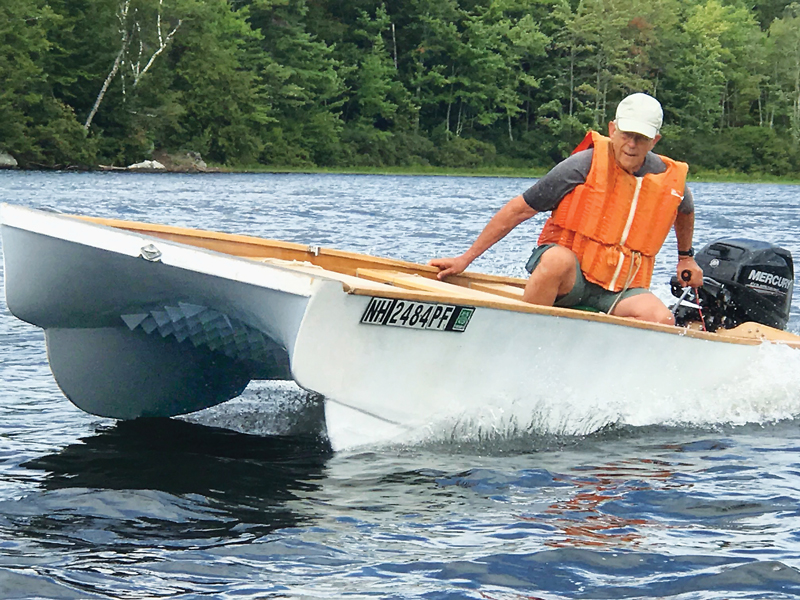 Despite feeling that with #5 he’d solved the problems associated with his four earlier designs—mainly failure to bank properly—Jim Kyle kept tinkering. Here, he tests the rows of small teeth he bonded to the forward concave sections, and the fins he added to each chine.

The ambition of boatbuilder and designer Jim Kyle to correct deficiencies in Albert Hickman’s famed Sea Sled and in the process to develop a more perfect small powerboat hullform (see “Tough Sledding,” Professional BoatBuilder No. 178) exceeds the saying “Three’s a charm.” It has taken him five solid tries. And even after Take 5, he’s still tweaking, tinkering with new ideas, unperturbed that someone else has introduced an inflatable version of the Sea Sled.

In that feature article, Kyle discussed four prototypes, each with incremental changes to the chines and centerline bump. His starting point was a takeoff of the multi­tudinous Boston Whaler 13—it, too, a Sea Sled sprout partly designed by C. Raymond Hunt. Kyle chose it because its performance and behavior are familiar to so many. In simple terms, the Whaler has a concave hull bottom with a central V shape that many call a cathedral hull.

Jim Kyle has been granted a patent that among other features describes the center ridge or bump or keel as deeper than the two adjacent chines one-third of the hull’s distance aft. It cannot extend deeper than the chines in the forward third of the hull. Much of Kyle’s experiments involved playing with the chine widths and angles, the concave shape of the forward sections, and the convex shapes of the aft sections. Prototype #5, though a “distorted #4″ as Kyle describes it, remains within the bounds of the patent. But there are a number of changes in that “distortion.” While the bow shape is the same, and the topsides are still essentially slabs (actually a little hollow the way it was built), and the boat remains a rectangle, of significance is the change of concavity aft in favor of flat sections to either side of the centerline V. Deadrise was set at 7°. The engine was raised 1“ (25mm), which Kyle says resulted in an increase in top speed of 1 mph, to 25 mph. He also added 5° to the transom angle.

There were three major shortcomings of the Sea Sled: poor turning (chine-walking, failure to bank significantly), cavitation of the outboard motor propellers, and structural weakness of the concave hull sections’ wood construction. The latter is no longer a significant concern with adequate composite scantlings. Kyle’s prototypes also suffered from poor turning and cavitation at certain speeds and sea states. The current iteration solves those shortcomings.

In tests last summer, again on New Hampshire’s Lake Warren, we put #5 through its paces with one and two persons aboard. Kyle had two 25-lb (11.4-kg) lead weights secured to the interior bow area, though he now says the boat is not very sensitive to weight distribution. Indeed, at rest it is very stable, allowing one to stand just about anywhere, including near the gunwales, with little tipping. Besides performance, Kyle seeks a practical, fun, family boat, and on the point of stability, the boat excels. It is also fast, and seakindly for a small boat.

On two of his earlier hulls, Kyle installed what he calls “teeth” in the concave sections forward. The idea, he says, is to “crush” oncoming waves and disperse the energy. First, he glued dozens of small teeth but decided they were ineffective, so on #4 he glued three larger wedges measuring 9“ tall by 5“ wide (229mm by 127mm). Reviewing videos, and peering over the bow while running at speed, Kyle believes they are an idea worth pursuing, so his next experiment with #5 was to add 100 small teeth, then six larger wedges, in conjunction with the smaller ones and separately. 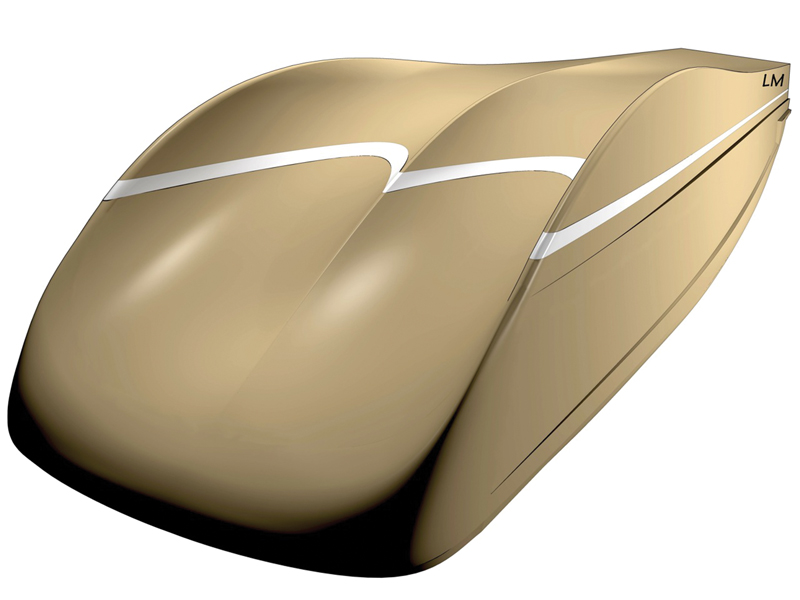 In his rendering of prototype #5, boat designer Laurie McGowan has faired the fins into the chines as they would be in a new build.

Unable to leave well enough alone, Kyle continued to modify the running surface. He took the boat to the ocean to run in larger waves. To incorporate features designer Laurie McGowan created on models in the feature article (PBB No. 178, pages 54 and 59), Kyle wrote: “The rounded, extended bow never once pushed water forward. And no water came out from the tunnel area under the bow. We observed that the outboard forward chines were 6–8 inches clear of the water at full speed and only contacted the largest waves. So, I returned the boat to the shop and extended the chines down 8 inches. These two fin-like extensions were always planned to be removed after testing. Hence, they only extend 52″ [132cm] aft and do not fair out along the hull. The extensions are not very pretty and the fairing job is not world class. The boat slowed down 1 mph with the extensions but, man, are they effective! We were worried that some bad steering and dangerous chine tripping might be induced by the odd fins. But no, the steering is amazing; the boat feels even more like it is on rails, like reports on the early Hickman boats. Any turning, regardless of the turning radius, results in the banking of the boat with the outboard chine lifting well clear of the water.

“Hull 5 meets all the requirements I set out to accomplish: fast and efficient, low power requirements, no bow wave, smooth ride in waves, turns wonderfully and banks nicely; easily beachable and trailerable, inexpensive to build due to the gently continuous hullform and lack of steps and discontinuities in the hull bottom; no cavitation, shallow draft, and far more stable at rest and at speed than a conventional hull. More experimenting with “teeth” and other designs of appendages that can further disrupt the incoming waves is required.”