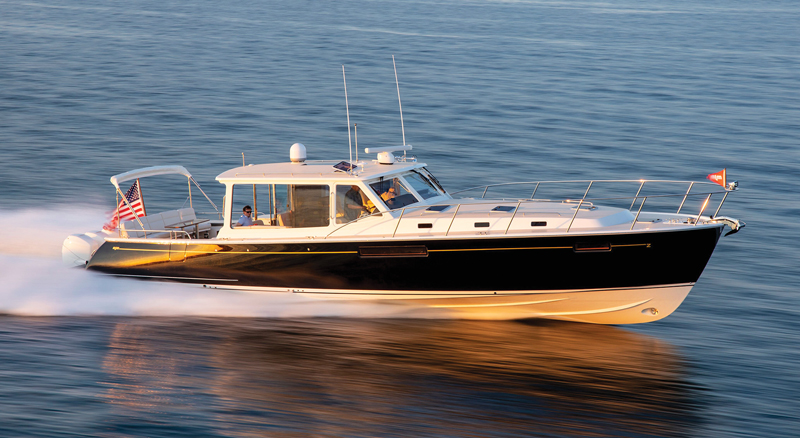 Capitalizing on the demand for larger and larger outboard-powered yachts, MJM offers a 53′ (16m) outboard model. The 53Z is powered by four 350-hp Mercury Verados coupled with Skyhook hovering, joystick piloting, and Seakeeper gyro for the ultimate in offshore comfort and ease of dockside maneuvering. MJM yachts are built of wet-preg epoxy by Boston BoatWorks.

So might say Bob Johnstone, who in 2002/2003 commissioned the first of five stylish MJM motoryachts from Marblehead, Massachusetts, designer Doug Zurn; so might singer/songwriter Billy Joel, who catapulted Zurn to stardom with several of his Shelter Island runabouts; and not to mention David Marlow, who keeps coming back to Zurn for the design of larger motoryachts. We’ve tracked Zurn’s ascendency in these pages before, notably in “The Zurn File” (PBB No. 100). While he loves sailing, his fortunes are largely the result of cool-looking express cruisers and motoryachts.

If he ever asked himself the David Byrne question “How did I get here?”, Bob Johnstone has the answer: “Doug Zurn has the eye.” How did Johnstone discover Zurn? Here’s the short version: Hailing from Erie, Pennsylvania, Zurn learned to sail on his father’s big boats, 50- and 60-footers (15.2m and 18.3m) designed by McCurdy & Rhodes; apprenticed with University of Michigan grad Bill Lasher; spent several years at the University of Arizona studying piano and classical guitar; enrolled at (and later graduated from) the Westlawn Institute of Marine Technology’s boat design program; worked as a rigger; spent several years drawing in Dieter Empacher’s design office; then joined builder Able Marine, designer Chuck Paine, and builder Tartan Marine in Ohio, before finally, in 1993, opening his own design office in Marblehead. 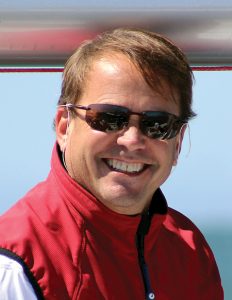 After working for boatbuilders, riggers,and other yacht designers, Doug Zurn got his break designing the Shelter Island 38 (11.9m) for singer/ songwriter Billy Joel. Zurn parlayed that into repeat work for MJM and Marlow, among others.

Ted Cooper, who Zurn knew at Able Marine, suggested he work up a 30‘ something and he’d try to promote it. Zurn drew a series of powerboat designs from 27‘ to 50‘ (8.2m to 15.2m). They caught the eye of Peter Needham from Coecles Harbor Marina & Boatyard in Shelter Island, New York. Needham had a client, a Mr. William Joel, looking for a certain kind of boat for his Long Island boating pleasure. Needham took Zurn to meet the piano man, and the result was the Shelter Island 38 Runabout (11.9m). Later, Zurn also designed an elegant 42′ daysailer for Canadian builder Mark Bruckmann. Jumping ahead to Bob Johnstone’s search for a designer of his MJM series, he asked his son Peter (a boatbuilder, Gunboat Mulithulls, etc.), “What’s the prettiest powerboat under 40‘ [12.2m] on the market?” Peter said, “The Shelter Island 38.”

Yes, Zurn has the eye. While there are always intangible factors in the creation of beauty, Zurn always seems to get his proportions exactly right—cabin height vs. freeboard, length of superstructure relative to hull length, size and location of windows, etc.). And of course the critical lines: the bow and transom angles, sheer, and coach roof have to be just so. His are elegant, crisp, and snappy. And all elements have to, and do, work together into a near-perfect whole. Study one of his boats and you’ll see what I mean.

“New designs in progress include a 25-passenger electric launch servicing a private camp on Lake Winnipesaukee, New Hampshire, a conversion of an old Monomoy Surf Rescue Boat to electric power, the Williams 29 for Jock Williams, and the new Hylas 58M [17.7m] for Queen Long Marine. 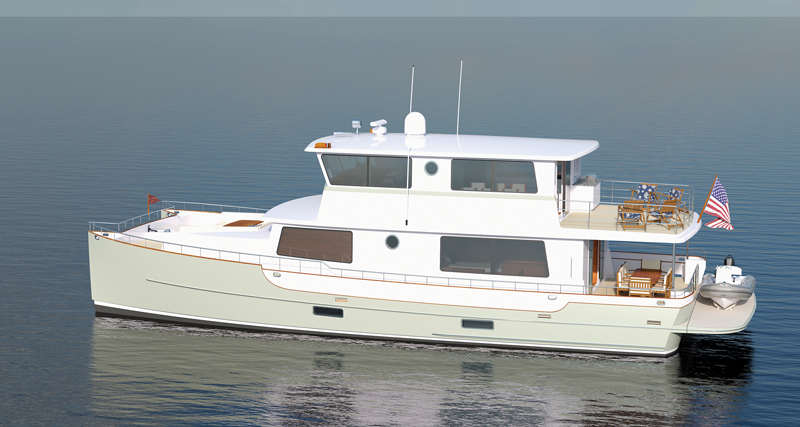 “What’s been garnering the most attention lately is our Zurn 60 [18.3m] Powercat with its massive bridge deck/great room up, and three-cabin layout down, including full-beam master stateroom. In this design, we have placed all the en suite heads down in the hulls, rather than the cabins. This will enable us to keep the beam of the hulls narrower and make for more efficiently driven hulls.”

The cat is being built at New England Boatworks (see PBB No. 81) in aluminum and is powered by twin 435-hp (326-kW) Volvo Penta IPS600s, delivering a cruise speed of 18 knots and a max speed of 23 knots. Wide spacing of pods improves maneuverability, Zurn says.