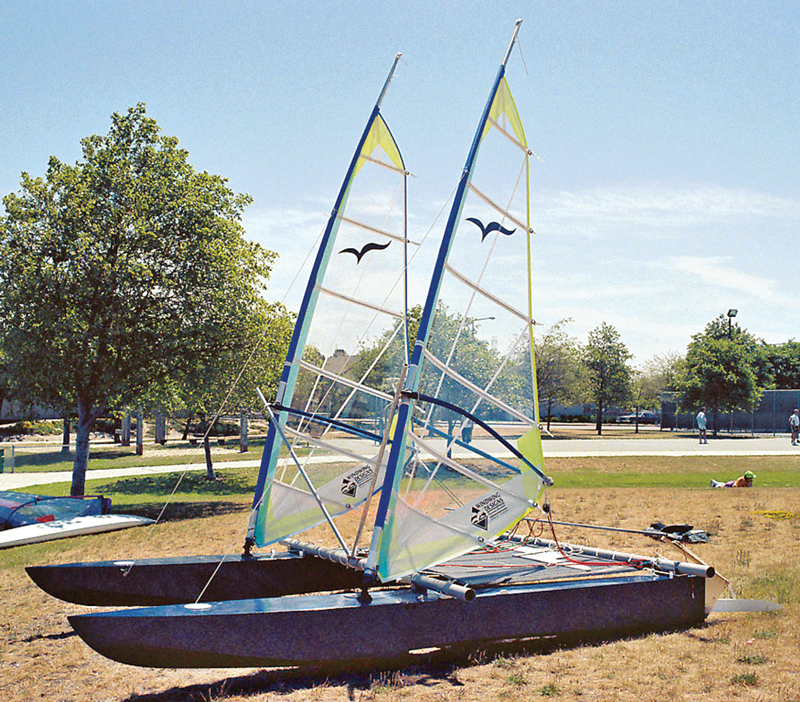 As a designer and engineer, I use computer programs I’ve written for hydrodynamic research, performance prediction (sail and power), and hull design. My 14‘ (4.3m) sailing catamaran design was the culmination of several years of theoretical and experimental research on stepped hulls.

I had the prototype of the stepped-hull sailing cat professionally built in plywood around 1992 by Darrell Sorenson of Sorenson Woodcraft in Chowchilla, California. An experienced builder of plywood kneel-down hydroplanes, Sorenson built two other boats for me, a 16‘ (4.9m) strip-planked canoe and a 36‘ (11m) double-chine cabin cruiser. Some finish work on the cat was done by Jim Hansen of Atherton, California. Hansen designed and built several 25‘ (7.6m) C-Class catamarans that competed for the Little America’s Cup. (For more on C-Class cats, see Rob Mazza’s “Wings of Change,” Professional BoatBuilder No. 133.)

My friend Jim Allison, an avid sailboarder, and I each solo-sailed my prototype boat off Coyote Point, on San Francisco Bay, a popular sailboarding spot with many boards beam-reaching at high speed. We sailed with them on this cat fitted with a biplane rig of two sailboard sails, a dagger-board in each hull, and twin rudders, joined by a lightweight crossbar. Along with the sailboarders, we reached back and forth to enjoy the thrill of speed, and sailed as fast as the best of the boards, both of us at about 30 mph, twice as fast as I’d ever gone under sail. We could tack and sail to windward, but beam-reaching was necessary for the boat to lift up on a plane and escape the limits of displacement speeds.

Our on-the-water testing proved the idea a success, but that’s where it ended. Shortly after our test sail, I developed a frozen shoulder, which took about two years to heal. During that time I focused on other projects and found a young sailor/naval architect who wanted to pursue the stepped-hull catamaran idea. I gave him the test boat but never heard from him again. When I called his employer, they said he had left town. I would guess that this boat is rotting in some backyard.

My hull design was granted U.S. Patent 5,191,853, which has expired. Indeed, I’ve written this article to urge folks to “steal” and further develop this design of a stepped-hull sailing catamaran, which will easily out-sail anything but a hydrofoil boat and is cheap and easy to sail. I seek no compensation.

The hull profile diagram from Adler’s U.S. patent illustrates the running surface designed to operate with just two small patches in contact with the water—one at the transom and one at the step.

For many years, the fastest sailing craft were sailboards. They were among the few sailboats capable of truly planing (defined as when all or most of the lift is provided by dynamic forces, rather than buoyancy). A sailing vessel derives its forward thrust from the sail, which of course has its center of thrust high above the hull. The negative pitching moment resulting from the high center of thrust pushes the bow downward and reduces the trim angle. Thus, the entire hull is in the water, resulting in a large wetted surface and high-friction drag. But sailboards are so small that a skilled rider can stand on the stern, where body weight provides sufficient positive pitching moment to keep most of the board out of the water and maintain a favorable angle of attack of about 4° for planing.

I sought to create a design that sailed at that ideal planing trim angle even with the high center of thrust of a sail and even without a sailboarder’s athleticism and skill.

A stepped hull can lift the bow out of the water by placing the step well forward. The hull profile of a stepped-hull sailing catamaran in my U.S. Patent 5,191,853 illustrates the hull shape that, at speed, planes with only two small patches of running surface in the water, thus minimizing friction drag. The wetted patches are just forward of the transom and just forward of the step. Once planing, the long, slender hull ahead of the step is of no use, but as an element of the efficient displacement hull it’s essential to reach planing speed.

In developing the idea into the successful stepped-hull sailing catamaran, I:

• wrote a computer program to simulate the height profile of the wake behind the step, and verified it by achieving good agreement with available data from experimental studies on flying boat hulls conducted by the Stevens Institute of Technology.

• towed several 2‘ (61cm) models in a swimming pool, and found that ample ventilation behind the step was essential for “lift out” into planing mode at moderate speeds. I began with no ventilation, and added small vents and eventually the generous vents of the final design.

• rode a 12‘ (3.7m) model, towed by a powerboat, in Racoon Straight on San Francisco Bay. My towline was instrumented with a force gauge that verified drag as about 10% of weight. During this test I viewed the region behind the step through a window and confirmed that it was dry. 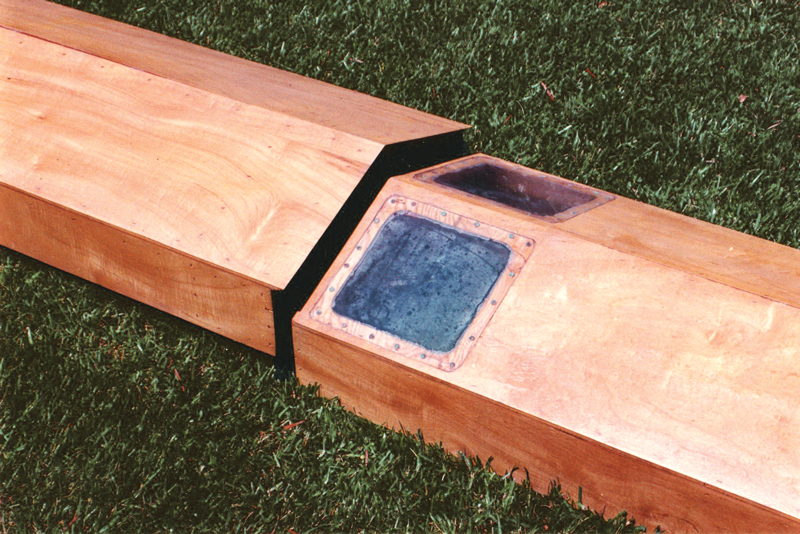 Adler’s 12′ (3.6m) test hull consisted of two 6′ (1.8m) hulls joined with a gap to ventilate the step. To experiment with different step heights, the designer adjusted the vertical offset between the two hulls. Riding facedown in the hull, he could look through the windows to verify the area behind the step was dry.

Without steps, the entire length of a hull this long would be wet, and the friction drag would be much greater. Steps lift the boat out of the water to reduce wetted surface and drag. Although many stepped-hull powerboats have narrow lateral vent grooves, I found that vent holes were far more effective at “drying out” the region behind the step at the moderate speeds of sailing.

On my cat the vent holes in the step and the air channel allow the step to rise free at much lower speed than is possible without them. Air is fed to the vents through a “trunk” just forward of the step. Imagine a centerboard trunk turned 90° to run athwartships. The trunk is sealed from the rest of the hull by bulkheads but is open at the deck—like a centerboard trunk. Air rushes in at the deck opening and down to the vents behind the step. (See item 16 on the patent drawing on page 55.)

Figure 1 is a photograph of my actual hull before painting. The kink in the hull bottom slope behind the step works in conjunction with the upward slope of the wake at this point to achieve the optimum planing angle of about 4°. The lift/drag (L/D) ratio of the hull is about 10:1. When planing, the drag is mostly friction, and the faster the speed, the smaller the wetted surface as the hull lifts out of the water. This maintains the 10:1 L/D over a wide range of speed.

Figure 2 is a close-up of the vents behind the step. The overhang of the forward running surface is very slight and not vital. However, a sharp corner there is necessary so the water will separate cleanly and stream straight back behind the step, like the flow behind any hydroplane step or transom.

With computer simulations I modeled the height profile of the wake behind the step. I wanted to determine the angle at which the aft portion of the hull would encounter the wake behind the step so I could angle the “kink” in that portion of the hull for optimum angle of attack. My method was to program Euler integrations of particles of water streaming behind the step. Checking my simulations against reports from the Stevens Institute of Technology towing tank, I found that my simple program agreed with their test data sufficiently well for me to rely on my program.

As with any planing hull with limited power, weight was a defining factor in design and construction. The finished boat weighed a scant 150 lbs (68 kg), and her “biplane” sail configuration yields a lower center of thrust than a single sail of the same area (although a single sail would also work). A lightweight crossbeam connected both sail booms, so they could be sheeted with a single line.

Figure 2. Adler’s 12′ (3.6m) test hull consisted of two 6′ (1.8m) hulls joined with a gap to ventilate the step. To experiment with different step heights, the designer adjusted the vertical offset between the two hulls. Riding facedown in the hull, he could look through the windows to verify the area behind the step was dry.

Performance of the Stepped-Hull Sailing Cat

The boat was amazingly easy to sail, and great fun. I’d never sailed so fast. It was fast enough to cause the boards and rudders to cavitate, meaning that on the low-pressure side of the fin the water turns to vapor and is useless for generating lift. The lift comes only from the high-pressure side of the fin, and the total lift coefficient is less than half that of a noncavitating hydrofoil.

I spent many hours minimizing the pressure peaks on the foils with a computer program created by my friend Ilan Kroo of Stanford University and sold by Desktop Aeronautics (Palo Alto, California). My goal was to increase the threshold of speed where cavitation begins. I now realize that cavitation is not as much of a concern in this context as I earlier thought. That’s because at high speed, even the reduced lift coefficient of a cavitating foil is entirely adequate. Allison and I learned that firsthand on the water when we broke one of the daggerboards during our sail at Coyote Point. Because the remaining daggerboard provided all the side force needed, we didn’t notice until we hauled the boat that we had only one daggerboard.

Graphic representation of the output of Adler’s wake-simulation program for the catamaran starts with the location of the step at the far-right vertical line. The profile of the water surface is the curved line streaming from right to left behind the step. The upward portion of the curve, approximately middle of the page, strikes the aft portion of the hull.

While hydrofoils are currently the fastest sailboats, they are complex, delicate, require advanced skills to sail, and have issues in shallow water. Stepped planing hulls are almost as fast as hydrofoils and much faster than conventional hulls, yet are inexpensive and easy to sail. For anyone interested in building this catamaran, I have all the necessary information and offsets, though not a conventional set of lines plans. (I have designed many boats with lines created by equations that I developed and programmed. These lines are inherently smooth, so no lofting is required.) You can explore the design of this stepped-hull sailing cat with my help at no charge or on your own. I can be contacted at AeroPress Inc., 1121 San Antonio Rd, Suite B101, Palo Alto, CA 94303.

About the Author: Alan Adler is an engineer/inventor with 40 patents. His best-known inventions are the Aerobie flying ring, which set a world record for a throw of 1,333‘ (406.3m), and the AeroPress coffeemaker. He designed and raced Fast-40, a custom ultralight 40‘ (12.2m) sloop, which was later manufactured by North End Marine in Rockland, Maine. He also designed Etosha, a 60‘ (18.3m) aluminum ketch that Bob Cranmer-Brown sailed to first-to-finish monohull in the Single-Handed Transpac Race from San Francisco to Kauai.