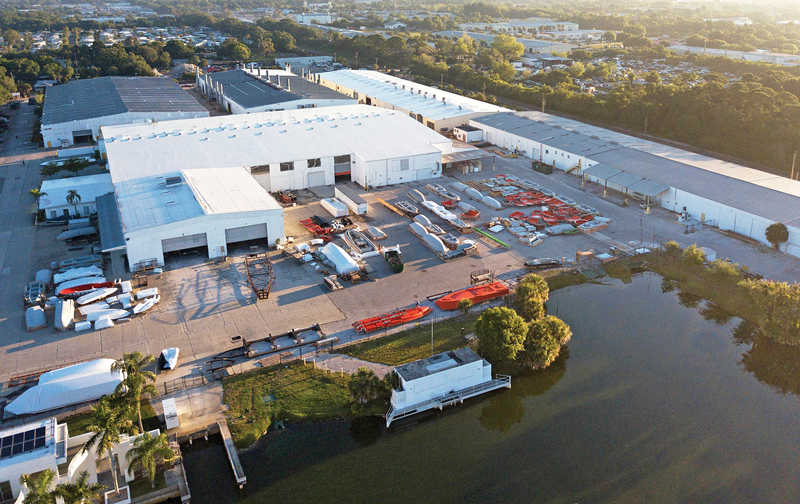 Additive manufacturing, or 3D printing, is emerging as a viable alternative to the now-popular subtractive process employing 3- and 5-axis milling machines/routers to make tools for parts as large as boat hulls and decks. PBB recently featured the making of a console for an Italian-made RIB (“Printing a Finished Console,” PBB No. 181); in the same issue, a large printed demo-tool mold (“Large Print”); and the mold for a 34‘ (10.4m) power catamaran printed at the Oak Ridge National Laboratory (Oak Ridge, Tennessee) for Xplora Yachts (“ Just Print It,” PBB No. 175). Several other boatbuilding companies in the U.S. also have made forays into the exciting yet still somewhat unknown future of 3D printing.

A recent survey found only a handful of other 3D-created tooling for boats; notable is a 16‘ (4.9m) runabout that Thermwood Industries in Indiana prototyped for White River Marine Group, part of Bass Pro Shops. This project was a collaborative effort with Florida-based Design Concepts/Marine Concepts (DCMC—the DC portion was formerly known as JRL Ventures under Bob Long’s ownership, prior to the sale to Patrick Industries in 2017). DCMC partnered with Thermwood, a leader in large-scale additive manufacturing (LSAM) with thermoplastic polymers, and Techmer, which supplied its Electra 1 ABS LT1 3DP pellet material for making the plug.

Owing to machine restrictions, a 16′ (4.8m)plug was printed in four pieces, bonded together with a urethane adhesive, and machined before a female mold was taken off it. The walls are approximately 11⁄2″ (38mm) thick.

To learn more about DCMC’s interest in 3D printing, we talked with Ross Kennedy, the company’s director of business development. Its first action was the joint venture with Thermwood, White River Marine Group, and Techmer mentioned above. “Then about a year ago,” Kennedy explained, “we got involved with Cincinnati Incorporated [CI], also a manufacturer of thermoplastic 3D-printing machines. Our goal was to print a light RTM plug. Simple carbon ABS print. CI printed it, shipped it down [to Florida]. We indexed it and machined it. Our goal was to directly machine it, and not apply any sort of sprayable, millable material, simply to mill the ABS and put a primer on it and bring it up to a level that would be equal to or better than our standard plugs, which are mainly built out of either a syntactic tooling paste or tooling board.

“That went well. We were able to infuse the B side for the light RTM tool and then open-mold the A side. We took that to IBEX and CAMX. We learned a lot, such as heat tolerances of each material based on exotherm and post-curing requirements. We’re also interested in thermoset printing. Magnum Venus has rolled out RAM, reactive additive manufacturing, which prints a thermoset part. We’re also looking at that.”

Much of DCMC’s interest is in eliminating the male plug, and simply printing a female mold that can handle the customer’s requirements (i.e., the number of required parts pulled) at a lower cost than that of a plug and mold. That’s where thermosetting materials might offer an advantage over thermoplastic. A bonus would be cutting lead times in half. Which is what Stephen Wu and Explora Yachts achieved in the printing of the 34‘ female mold referenced above in PBB No. 175. Printing was vertical as opposed to the more-familiar horizontal layering.

Regarding plug making, Wu told us, “We’ve advanced beyond that gen-one technology, but no problems with longevity. We have pulled multiple pieces without issue. That surface [of the 3D-printed mold] is also very repairable. The only thing we did on occasion was to coat with some PTFE tape to make demolding easier, and we’ve played with different releases to get best results.” 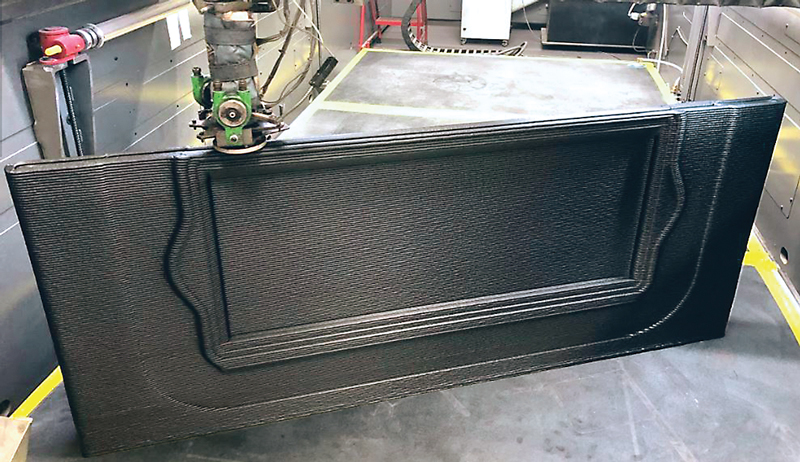 Cincinnati Industries printed this part of the LRTM (light resin transfer molded) plug and shipped it to Florida.

Another way costs could be shaved is by being able to mill the plastic-printed plug material directly, and not spray a material over it. That may be possible by increasing print resolution. Either way, as it is today, Thermwood employs a process called near net shape, which means the printed plug is not 100% accurate; the melted beads may or may not be sprayed with a syntactic material, and the base material, or spray, milled by a 5-axis router to the desired tolerances, ± 30⁄1,000“ .

When asked if he sees 3D printing one day supplanting today’s subtractive milling processes, Kennedy said it’s difficult to predict, and part of that answer depends on continued development of new print materials that can yield a finished surface without additional work, or at least, as noted above, without adding another material. “Right now,” Kennedy said, “3D printing can’t exist without 5-axis machining.”

And if subtractive milling becomes obsolete, what then for tooling shops’ huge investment in machinery? “I think the 5-axis machine will evolve into another tool in your tool belt,” Kennedy predicted.

DCMC has grown considerably since PBB last wrote about the company, now employing 350 in two facilities—the original in Cape Coral and the more recently acquired old Wellcraft plant in Sarasota, plus leased office space. As founder Kiko Villalon touted in the 1970s, it’s still a one-stop shop for product design, tooling, and prototypes. In addition to tooling, part manufacturing has grown substantially as a sizable part of the business.

“We private-label manufacture for marine and nonmarine companies,” Kennedy said. “A large amount of parts are infused, as we’ve invested heavily in those techniques. We infuse hulls, decks, and other parts the builder doesn’t want to do, for whatever reason: he doesn’t want to take on the risk or put together an infusion team.” And smaller parts for nonmarine business as well. “The Design Concepts side has evolved,” Kennedy said. “It’s really taken off. We now do a lot of work in flight simulation, entertainment industries, and the transport market, both tooling and parts build.”

With six mills and 370,000 sq ft (3,374m²) of manufacturing space, DCMC can cut up to just about any length; its largest mill has a 68‘ x 24‘ x 13‘ (21m x 7.3m x 4m) envelope. As Patrick’s number of companies grows, especially in the marine and RV markets, DCMC enjoys a complementary relationship with others in the fold, meaning a project that doesn’t quite fit DCMC might well be perfect for another—or be shared efficiently.