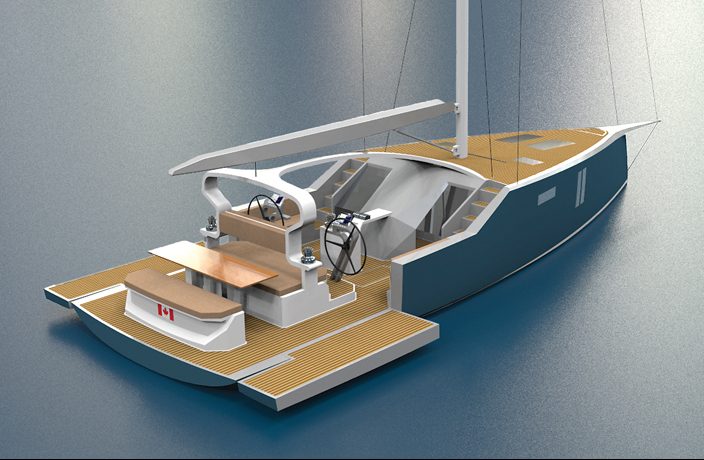 Antoine Beaulieu’s Butterfly 46 (14m), a performance sloop intended for gracious day-sailing with a crowd and cruising for a couple, was the winner of IBEX’s 2019 competition for young designers asked to imagine a concept boat for 2050.

Close your eyes and think back…way back. It’s November 1989; the Berlin Wall has just fallen; George H.W. Bush is the still-new U.S. president; Miami Vice is just wrapping up a long network run; and in boatbuilding Holby Marine’s Clearwater 35 headlines as Sailing World’s boat of the year; the Hustler 32 is Powerboat Magazine’s offshore favorite; computers appear in some design offices and only the most advanced onboard appli­cations; vacuum-bagging is a construction concept still getting traction; tin antifouling has just been banned; there’s no hint of the crippling luxury tax that will knock us down in 1991; and you are likely to be reading the first issue of Professional BoatBuilder.

Now open your eyes, look around, and honestly tally the defining elements of our current world that you would have predicted in 1989. If you’re like me, you can count them on one hand. Geopolitics and entertainment aside, few of us would have foreseen the success of sailing foilers, the refinement of batteries and electric propulsion, the material properties of many advanced composite structures, the renaissance of fiber rigging, 3D-printing, thermoplastics, the popularity of wave-piercing hullforms, the advent of wireless controls, networked onboard systems, distributed power, etc. Now you understand the true challenge IBEX (International BoatBuilders’ Exhibition and Conference) organizers posed to young (under 30) designers last year when they asked for the best concept boats for the model year 2050.

From the published challenge: “As they conceive of and develop their designs, participants are urged to think pragmatically and creatively about the future of our industry: In 2050 who will be buying recreational boats and why? What fuels or propulsion options will be most favored? What construction materials and techniques will be cost-effective and accessible? What size boats will be practical and popular? What yet-to-be developed or refined technologies will have disrupted or redefined boating as we know it?”

They were asked to provide:

• Description of construction technology and materials

• A narrative description of the boat’s intended use profile, performance, defining materials and technologies, and build methods. This should include predictions of how recreational boat use will evolve in 30 years, as well as likely developments in design technology, build materials, onboard systems, propulsion options, control systems for boat operations, and regulations builders and owners will be subject to.

From the pool of original submissions, organizers selected three finalists to present their designs to judges and audience at the Tampa Convention Center on October 2 during IBEX 2019. They included a 50‘ (15.2m) electric power cruiser designed by Nicholas Fletcher, a young engineer at Bertram Yachts; a 9.8‘ (3m) electric-powered skiff from Gabriela Campos de Lima, Joaquim dos Santos Neto, Juliana Ramos Fernandes, Rodrigo Magalhães de Castro, and Rodrigo Gol Sylvestre, a team of students at Universidade Federal do Rio de Janeiro, Brazil; and a 46‘ (14m) cruising sloop from Antoine Beaulieu, an independent yacht designer and 2019 graduate of the design program at The Landing School (Arundel, Maine).

Following a series of lively presentations and discussions with the judges—Marnix Hoekstra (Vripack), Rob Kaidy (SeaVee Boats), Vlad Murnikov (mxDesign)—the winning boat selected was Beaulieu’s innovative Butterfly 46. But before we go into detail about it, let’s survey some of the points the finalists had in common as they looked 30 years into the future of our industry.

As requested, all the designers of the three finalists had engaged in reasoned speculation as to what materials and technologies might have advanced in ways that could redefine some aspects of boatbuilding. For instance, they all assumed improvements to battery capacity and efficiency, with Fletcher’s purely electric-powered boat having the most at stake in that development. 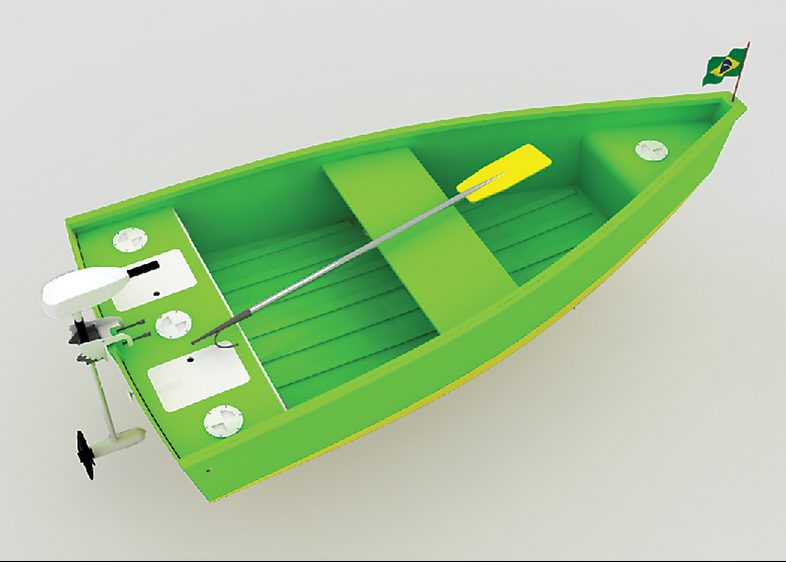 A spartan but high-tech skiff by a student design team at Universidade Federal do Rio de Janeiro, Brazil.

Advancements in 3D printing and automated fiber placement were essential to the Butterfly and the Brazilian team’s y50 skiff. Both boats included printed core structures that were skinned using computerized fiber placement and infusion. Fletcher’s proposal applied 3D printing to create the molds.

Fletcher and the Brazilian team proposed some elements of semi-autonomous operation in their respective designs. The former suggested the boat might even be self-delivering to another port where the owner wanted to meet it, while the latter’s small skiff included a clever automated docking system that would take the guesswork out of getting a boat on and off a trailer at a boat ramp, especially useful for a solo operator. On his Butterfly 46, Beaulieu proposed an “interactive holo­gram information display” that included an active interface with the boat’s operating systems, monitoring devices, and navigation technology, all accessible through one 3D hologram at the helm station.

Looking at likely market changes, the very modest and simple y50 skiff was predicated on a possible future where high population densities and resource scarcity meant middle-class boating was limited to a vessel that could be stored in a home garage and easily transported with the family car. One judge commented, “I think that the future of boating will need more thinking like this, to make less-expensive boats that are simple and inexpensive to manufacture, own, and operate.”

The other two designs assumed the consumer market and price points for recreational boats would change very little from today, though Beaulieu specified that regulatory requirements for end-of-life disassembly and recycling would drive some materials and build-quality decisions to maximize useful operating life and allow for refits and disassembly. He also noted that time constraints on boat owners of 2050 would make day-sailing a practical reality for many—sadly a future not far removed from current use patterns.

Overall, organizers and judges were pleased with the quality of the finalists’ proposals, which included 3D-CAD surface modeling and performance calculations. It was also important that, while engaged in the very personal process of predicting possible futures, none of the designers strayed into “magical thinking” about fantastical advances that would generate endless cheap green power, or allow for self-repairing biotech hull structures grown in an incubator.

For the panel of judges, choosing the Butterfly 46 as the winning submission was as much a process of embracing the designer’s vision of the boatbuilding trade in 2050 as it was assessing the specifics of the proposed boat. It was the consistency of vision and the boat designed to fit it that resonated with them. 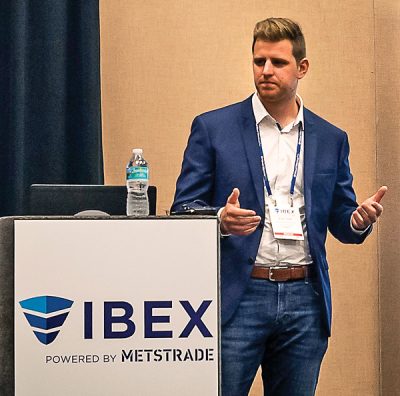 Beaulieu defends his design before the judges at IBEX 2019.

Beaulieu wrote, “People are nowadays living at a fast pace, and I don’t think it will change in 30 years from now. The attraction of the sea, the escape it can offer, will attract more people into day yachting. It brings me to envision boat owners more reluctant to share their cocoon with others at night…. I envision that the new generation of buyers will return to sailing and to green boating in general. That is why my design is a sailboat, but with ease of use in mind. I wanted to offer a platform where it is easy for people from the motor side of the market to transition into sailing, without being disoriented, thus the uncluttered deck and general aspect of the yacht.”

The folding hull elements that can expand deck and living space close to the water when the boat is at rest, is an extrapolation of current trends in powerboat design. Similarly his inclusion of hologram controls and a focus on a single large master cabin take their cues from joystick controls and large single-berth cabins in powerboats of 2019. 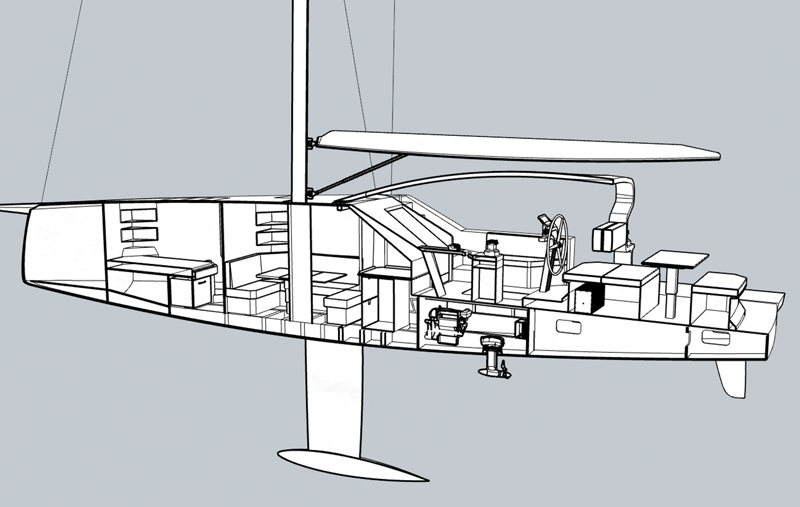 The Butterfly 46’s fold-down topsides presented some structural challenges in the afterdeck. Here, the necessarily robust composite longitudinals are clearly visible, as are the ample accommodations under the raised deck forward.

“His foundational idea that powerboat owners might slow down in the future and look for more organic boats fits a trend that many see beginning to form,” one judge wrote.

The design is predicated in part on the assumption that emissions standards and aesthetic preferences will have pushed fossil fuels out of the mainstream by 2050. And based on the current rate of power storage and management technology development, embracing electric auxiliary propulsion with the highest-capacity batteries possible to power all onboard systems seems a good gamble. Beaulieu very responsibly included space for a modest generator in his design but writes that he’s hopeful hydro­genation while sailing coupled with notional photovoltaic panels in sails or painted on the hull could generate the electricity required for all onboard systems.

His approach to structural composites for the hull starts with a pragmatic acceptance that “natural fiber” composites might not be the way to go, especially if their development displaces other agricultural capacity like food production. Instead, he suggests weight reduction through the application of carbon composites and use of recyclable thermoplastic resin that allow for the reuse of resin and fiber. 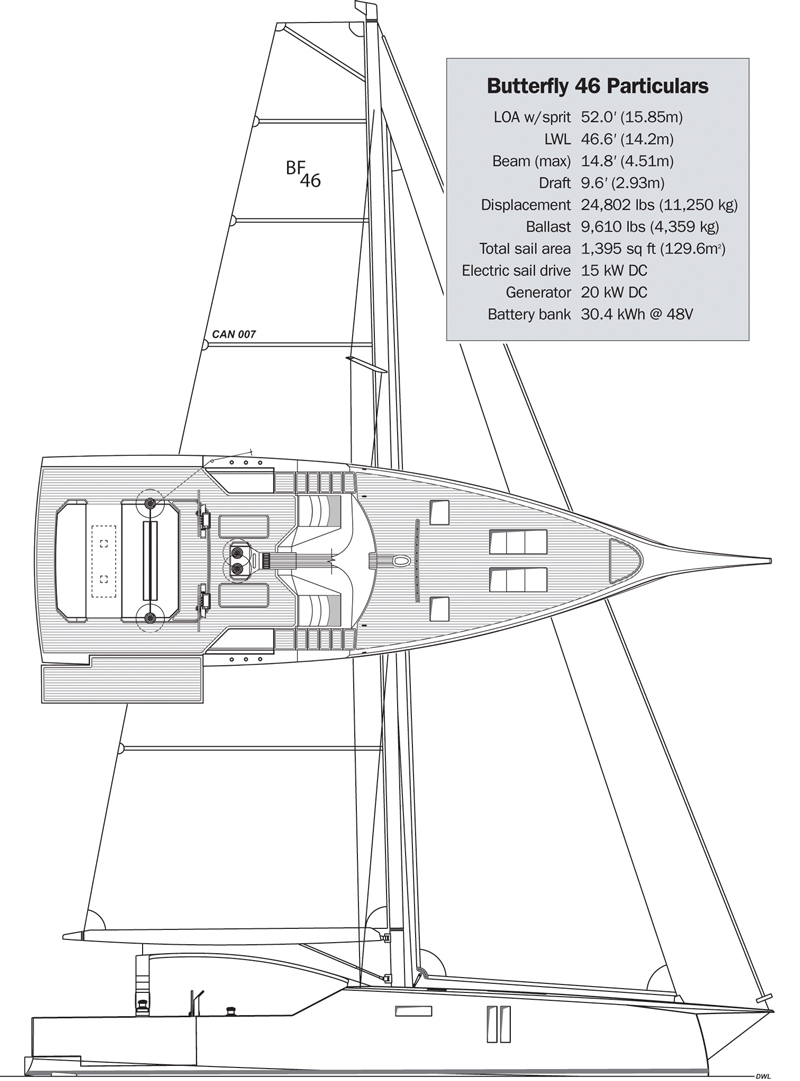 The Butterfly 46’s hull and deck are unconventional—with a large, open deck aft replacing a cockpit—and twin companionways. Conversely, the rig and appendages are decidedly traditional. Judges wondered: Why not a soft wing sail or a swing keel?

He predicts clients will demand to know the environmental footprint of production, driving the use of RTM or silicone vacuum bags and 3D-printed elements.

Beaulieu: “It is like if all the coring of the hull, its stringers, bulkheads, transverses, etc., would be printed as one, and then a robot would wrap fibers around them. No more molds required.”

In addition, he identifies the environmental costs of short-lived boats (even recyclable ones) and intentionally designed the Butterfly’s structure to be independent of interior layout, which makes refitting accommodation spaces easier, thus extending the vessel’s likely useful life.

Criticisms from the judges included the double companionways that take up a lot more space than a single passageway would. But they accommodate the central location of the spartan galley unit and leave it open with good ventilation to the main cockpit. There were questions about the structural adequacy of the aft sections of the hull that would be deprived of the stiffening influence of the fold-down topsides. Beaulieu said that his calculations indicated that with no fixed backstay to the transom (the rig relies on shrouds on swept-back spreaders), the hull structure would be sound.

One judge commented, “We felt that the design could have incorporated a rig with some more visionary elements, like a soft wing, and possibly a folding or swinging keel.”

All the judges were impressed with Beaulieu’s hybrid vision of a sundeck-style cockpit with a sunpad lounger.  One wrote, “This visionary use of exterior space expresses his notion of comforting powerboat owners in their transition into sailing with powerboat features. I think this is a trend we will see more and more.”

In the end, that concept of a sailboat that might appeal to powerboaters prevailed. Keep an eye out for our follow-up coverage in PBB No. 361 in October/November 2050.