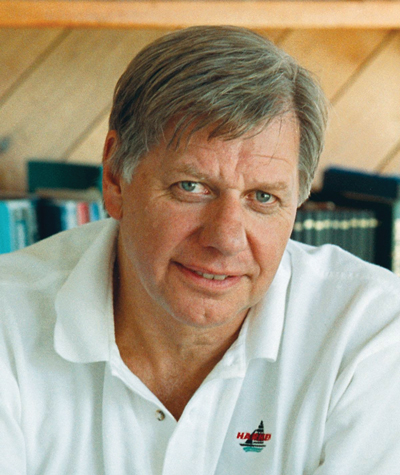 With brother Peter, Olaf Harken founded and managed a manufacturer of leading sailboat hardware, early on employing ball bearings in its sheaves and other gear to reduce friction.
They also built a lot of small boats as well as the experimental 65′ (20m) Procyon.

A hard-working, innovative leader in the sailing world died October 21, 2019, in his longtime home of Pewaukee, Wisconsin. Olaf Harken was 80. With older brother Peter the two began building sailboats in the late 1960s and later shifted their business into sailboat hardware, forming Harken Yacht Equipment and making many advances that improved line handling on boats ranging in size from dinghies to America’s Cup yachts.

Olaf Harken’s first years were too fraught with danger not to recount briefly. They trace to Sumatra, Indonesia, where he was born in 1941 to a Swedish mother and a Dutch father, Joe, who worked for Caterpillar Tractor. When the Japanese bombed the country, Joe Harken joined the Dutch army, and was soon captured. His family escaped to Borneo, and during the war was moved first to New Zealand and then Australia, before landing in San Francisco, California, in 1944, and reuniting with Joe in 1946. Olaf served in the U.S. Navy and attended Georgia Tech University before joining brother Peter building boats in Wisconsin. Under the name Vanguard (later owned by Laser Performance), the brothers built fiberglass one-design sailboats such as the Olympic class 470 (350 produced the first year), Flying Junior, and Finn.

To improve sail handling, Harken also began making blocks and sheaves with Delrin ball bearings to reduce friction. As the brothers moved into rigging for bigger boats, they were the first to adopt DuPont’s tougher Torlon plastic to make ball bearings, and became the first to employ carbon fiber drums in their line of winches that inspired others to come up with fresh ideas to this essential piece of sailing kit. To concentrate on the more-promising hardware business, in 1986 they sold Vanguard to Steve Clark and Chip Johns, who bought the molds and brand and moved them to Rhode Island.

With the purchase of the Italian winch manufacturer Barbarossa in 1987, Harken expanded to Europe.

Active in the industry movement to grow sailing during the mid-1980s downturn in boat sales, in 1987 Olaf built Procyon, a 65‘ (20m) composite yacht that aimed to allow a small crew to rig and get under way in just 5–10 minutes. Though many of the futuristic features are common today, at the time they were revolutionary: canting keel, bipod mast, dual steering stations, and, of course, furlers.

Over the years, Harken has found industrial applications for its equipment, ranging from wind power to utilities, stage and theater, and architecture.

When Olaf and Peter were inducted into the National Sailing Hall of Fame in 2014, Peter told the audience: “When trying new stuff, our rule is to ask, ‘If it all goes bad, can we survive?’ Then we go to the bar and forget what we just said and do it anyway!”

Olaf Harken will be remembered for more than co-founding a first-class company—he was a good, honest man with many friends.