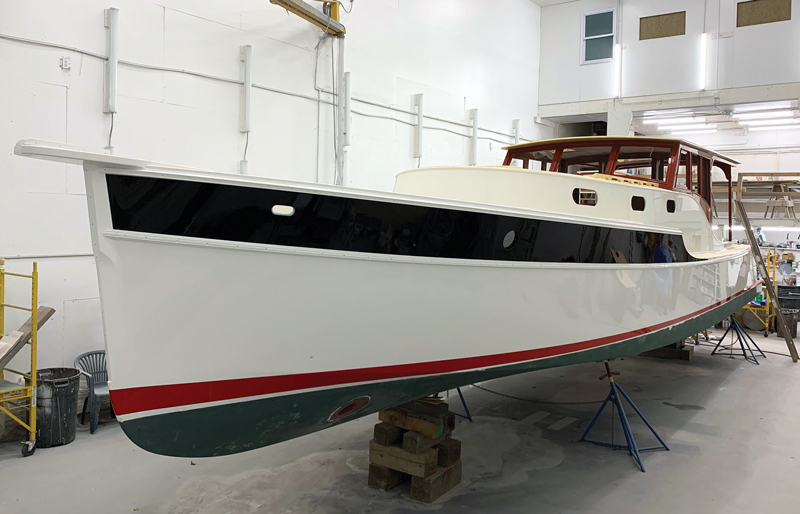 The Hylan & Brown–built Scout emerges from the paint booth at nearby Brooklin Boat Yard showing off a perfect Alexseal finish.

With a new build project on the home stretch at Hylan & Brown, regular PBB contributor Reuel Parker submitted this brief about a new coastal commuter:

In 1996 I designed a modest powerboat for Erik DeBoer of Key West, Florida, the owner of the island’s lumberyard, who previously had built Phil Bolger’s Tennessee design. Having sold her years before, DeBoer now wanted a larger cabin cruiser with similar properties—narrow, light, easily driven, and with a very shoal draft.

DeBoer, his father Herman, and I collaborated until we all agreed on basic parameters, after which I took our collective ideas to the drafting board and designed Magic—my first Commuter 36 (10.97m), which Erik subsequently commissioned me to build for him in early 1997. (For more on the Commuter 36, see “Out of the Everglades,” Professional BoatBuilder No. 130.) Unfortunately, in the summer of 2018, Magic was destroyed by Hurricane Irma, and DeBoer then asked me to design a larger, more sophisticated boat for him—suited to his mature years and requirements for comfort and more cruising range. 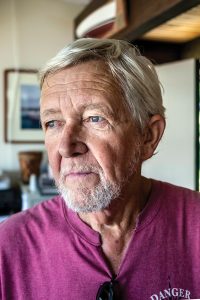 As a point of departure I used my Coastal Commuter 38 (11.6m) design, but DeBoer and I expanded and modified her until a whole new animal evolved. The new boat, Scout, has twin 250-hp outboards, integrated swim platforms, an enclosed pilothouse, air-conditioning, a bow thruster, and accommodations for four. She’s a single-chine, shoal-draft, twin-outboard cruising yacht, moderately offshore capable, with trips to Cuba, the Dry Tortugas, the Bahamas, the Everglades, and the Eastern Seaboard and beyond during settled weather.

Built in Maine, Destined for Florida

DeBoer chose Hylan & Brown–Boatbuilders in Brooklin, Maine, to build the new boat. We met there last summer and agreed that it was an excellent choice. Initially, I was concerned that the yard might not be comfortable with my admittedly old-fashioned plans but was relieved to learn that I did not need to worry. Doug Hylan imported my design into Rhino software, a crucial step for bulkheads and other structural components to be accurately cut on a CNC router.

Ed Note: The Scout project is an example of close cooperation between owner, builder, and designer that continued throughout construction. “Reuel’s drawings provided a concept for a simple boat that would be efficient to build and to operate, like many of his designs,” Ellery Brown told PBB. “But even before we set up molds it was clear the owner intended to make some major changes and additions to construction, layout, and, most of all, systems. Consequently, the vast majority of details of Scout’s construction were sorted out here at Hylan & Brown. Some details were figured out in the design office, still more on the shop floor, but always with lots of input from the owner.”

Even as the build commenced, the design of this coastal commuter continued to evolve in DeBoer’s mind, and many changes were made in situ. The basic boat, however, emerged as I designed it, with minor modifications. Remembering the inexpensive American marine plywood we used in the construction of Magic—and the consequent problems that ensued—we elected to use the finest European marine plywood available, and ended up with Hydrotek Meranti BS 1088. Similarly, the longitudinals were fashioned from the best Douglas-fir lumber available, so Scout will be strong, durable, and offshore capable. 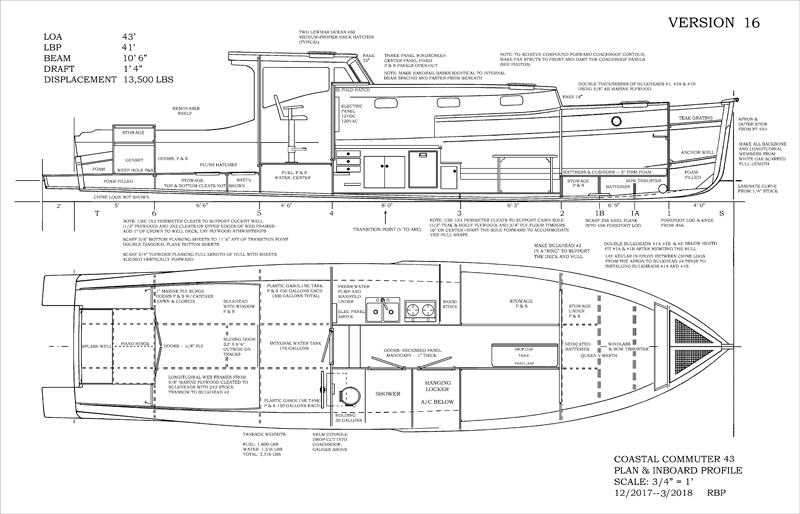 Parker’s drawings for the 43′ Coastal Commuter that was inspired by an earlier boat he designed for this client. The swim platforms are extensions of the hull sides and bottom, adding flotation.

Because DeBoer wanted walk-through access to the swim platforms, I designed “anti-surge doors” on each side of the centered island lazarette, which houses a Westerbeke 3.5 SBCG – 60-Hz, low-CO gasoline genset. Another modification was made to the transom, because outboard manufacturers have a preordained minimum angle for their motor brackets, and my design did not meet it.

As changing the actual transom angle would have had a negative effect on the boat’s appearance, Hylan & Brown simply added a laminated wedge onto the transom to achieve the desired angle for the outboard brackets and align them to each other—compensating for transverse curvature. This way, the partial transoms outboard of the walk-throughs retain the original visual aesthetic.

When DeBoer mandated that outboard power for this coastal commuter be increased to twin 250s (he originally specified twin 150s), I beefed up scantlings throughout the hull, and added new structural components in the boat’s stern. The swim platforms are literally extensions of the hull sides and bottom, providing additional flotation with the cockpit well deck extending to form their tops. 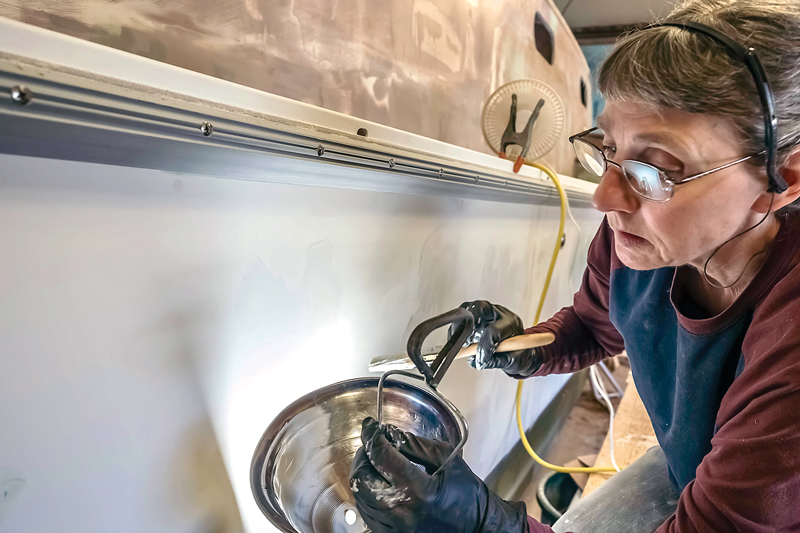 A lamp helps master finisher Naomi Bishtok find and fill pinholes in the primer coat on Scout’s hull before the boat goes from Hylan & Brown to the paint booth at Brooklin Boat Yard.

Ed Note: During my shop visit last summer, a crew that included finisher Naomi Bishtok and boatbuilder Kit Macchi was prepping Scout for subsequent painting, in the spray booth at Brooklin Boat Yard. At press time the boat was being readied for sea trials, after which DeBoer will decide whether to take her to Florida on her own bottom or have her trucked.