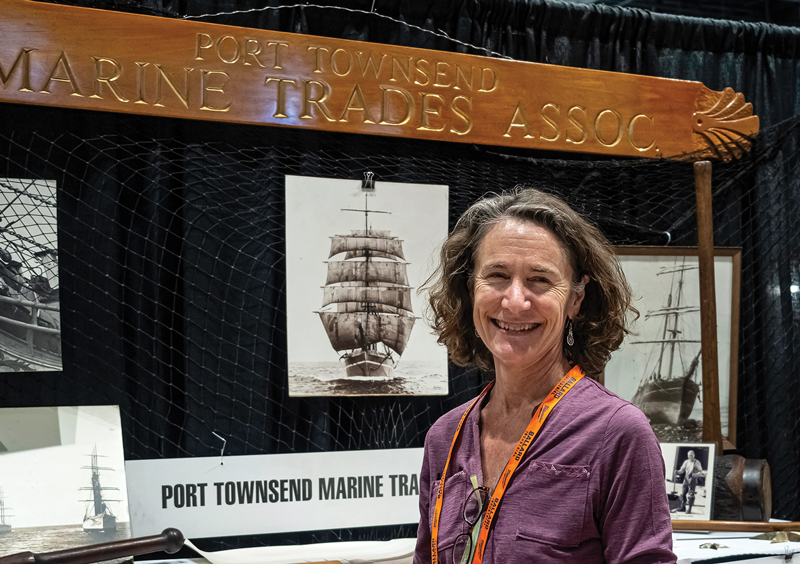 Pam Petranek, the first woman to be elected Port Townsend’s port commissioner, will work to strengthen the marine trades and the port’s infrastructure.

At last November’s ballot, the constituents of Jefferson County, Washington, made history by voting into office Pam Petranek, 59, the first female port commissioner in the 95-year history of the Port of Port Townsend. Petranek ran on a platform pledging transparency, accountability, sustainability, and support for the local marine trades and Port Townsend’s unique working waterfront.

“Failure is not an option for our Port,” Petranek said. “Its success is critical to the local economy. It also needs to remain accessible.” Looming large in this election were Washington State’s initiatives to drive growth in the maritime sector and the 2018 economic impact study of the Jefferson County marine trades, which made plain the boating industry’s impact on the local economy. Prepared for the PTMTA, the study found that more than 2,200 direct and indirect jobs in the county are supported by the marine trades, accounting for 19% of overall employment and generating $12.6 million in tax revenue for the city, county, and state.

Another first that came about in the November ballot was the approval of the Industrial Development District (IDD) levy for capital improvement projects. “According to James Thompson, director of the Washington Public Ports Association, in his memory, this is the first IDD levy that has ever passed a public vote since the legislation was first introduced in the 1960s,” the Port Townsend Leader reported. The maximum amount that can be taxed is $15 million over a 20-year period, but the Port was leaning toward a tax of 13 cents per $1,000 of assessed property value for 20 years, amounting to a little more than $800,000 to be used as seed money for urgent infrastructure projects including the replacement of the Point Hudson jetty, dredging and dock replacement at Quilcene marina, updates to the breakwater, and dock replacements at Boat Haven, among others.

“There will be a direct impact if that [Point Hudson] jetty failed,” Petranek said, noting that it wouldn’t affect just the marina but also two marquee events, the annual Race to Alaska that starts in Port Townsend in June and the traditional Wooden Boat Festival in September. “And there’s also a direct impact on the rest of the businesses in Port Townsend.” Fixing critical infrastructure, the town’s first female port commissioner said, is something “I just want to do really well.”