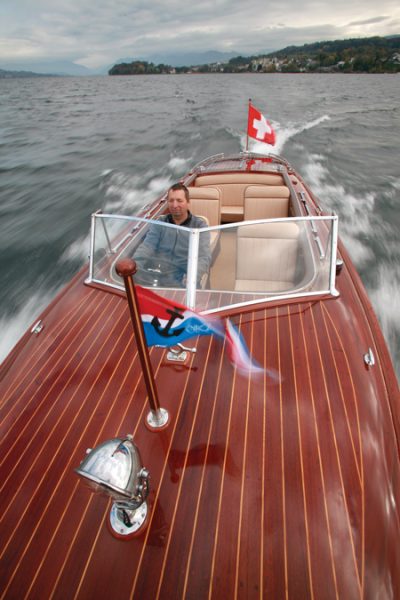 Few small family businesses and even fewer boatyards can claim a history dating back to the Napoleonic era. Of the many boatbuilders around the alpine lakes of Italy, Austria, Germany, and Switzerland, the one exception is Yachtwerft Portier AG. Originally named Suter, it was created in 1815, a crucial year in Europe: The emperor Napoleon abdicated on June 22; and in Switzerland, on August 7, the Federal Pact was signed forming the confederation of 22 Cantons, of which Zurich, already one of the most populous in the country, was part. Its eponymous capital was already a major economic power thanks to the lake, which served as a transport route linking prominent border regions in the heart of Europe, long before the development of railways and roads. In addition, because fishing was a crucial food resource for the population, building and repairing fishing boats was vital.

In 1815, the year of Waterloo and the Vienna Congress, David Suter acquired land in Meilen, ideally located on the shores of Lake Zurich, and built facilities to repair and build fishing boats. The small firm prospered. The origin of the typical French name that the boatyard bears today occurred in 1914, with the arrival of Félix Portier. This skillful and enterprising shipwright from the French town Thonon-les-Bains on Lake Geneva soon charted a new course for the Suter yard—specializing in pleasure boating. In 1917 he married Paulina Rosa, one of the daughters of his aging boss. He soon took the helm of the company, which became Suter & Portier Yachtwerft. His father-in-law gave him greater control of the business at the time yachting expanded in the 1920s and ’30s. In 1941 the Suter and Portier families split, and the firm bore the solitary Portier name. 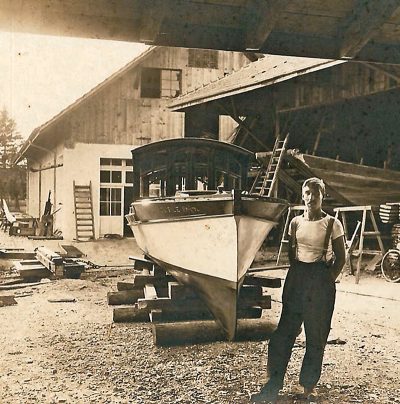 Immigrating from France, Félix Portier settled at Meilen in 1914 and changed the destiny of the Suter family boatyard,

At that time, more and more wealthy customers were coming to Meilen to have a custom yacht built. Félix Portier, without leaving the lucrative market of the working boat, proved right in betting on high quality and accommodating customer requests in each order.

For a wealthy Swiss watchmaker, Portier crafted a 28‘ (8.5m) mahogany runabout named Flaneur. Sleek and elegant with a torpedo stern, it was equipped with a 1936 marinized Ford V8 by Scripps. Flaneur had a seven-seat cockpit with rising side windows like a luxurious limousine. Satisfied with Portier’s work, he ordered another special runabout named Glisseur, today part of the collections in a French museum at Arcachon, near Bordeaux. Flaneur, more or less abandoned for four decades, was meticulously restored and today is a signature vessel in the historical fleet of the HZB Foundation (Historische Zürichsee Boote), which aims to preserve the most beautiful examples of Lake Zurich boatbuilding. 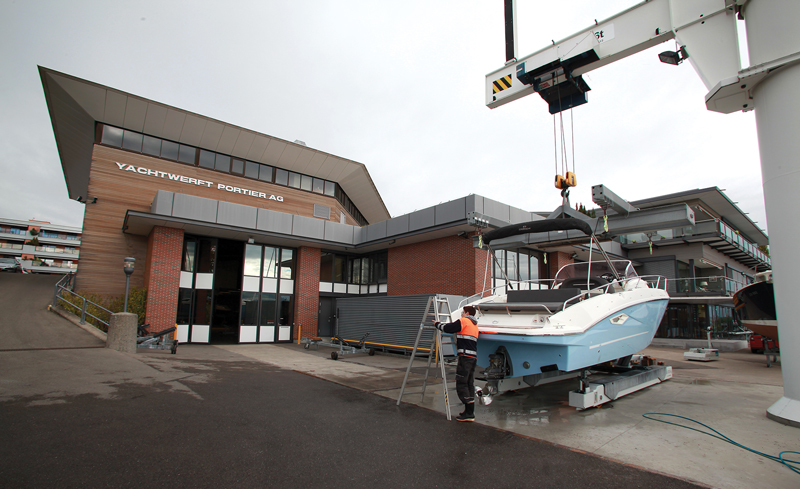 In 2015, Portier celebrated its 200-year anniversary, thanks to consistency, quality, adaptation, and location. These key factors helped Portier attract well-heeled and sometimes prominent customers such as Nestle and the jeweller Louis Cartier, who ordered the 65‘ (20m) motoryacht Elma, launched in 1953. Portier built more than 2,000 units, in wood, steel, and fiberglass, gradually expanding its facilities. That number includes 300 wooden Star Olympic class keelboats and nearly 600 Ynglings. After the years of boatbuilding, the company, presently headed by Ariane Vonwiller, shifted its focus to boat storage, handling, service, and importing brands including Cranchi, Sea Ray, SAY Carbon, Boston Whaler, Chris-Craft, Jeanneau, and Bavaria.