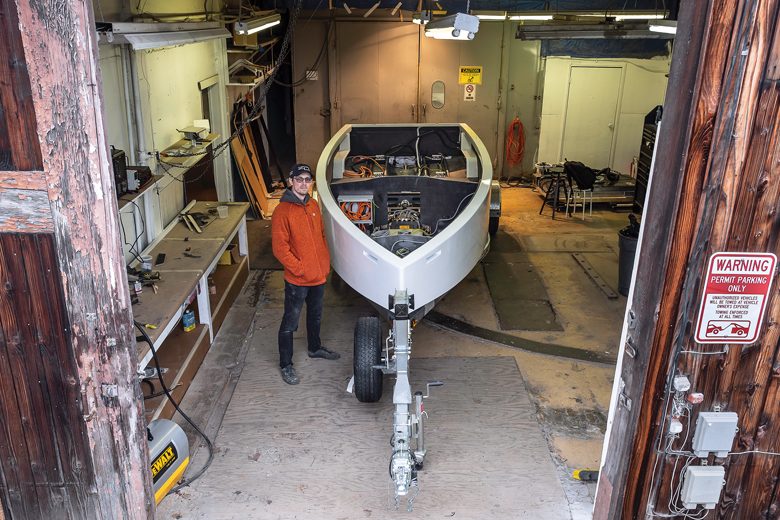 Piotr Zin stands beside the 20′ (6.1m) ZR2 in his Seattle workshop before installing the deck and battery and finishing the boat. Note the chargers are also installed forward.

Following the lead of European builders such as SAY Yachts (see “a = F/m,” PBB No.180) venturing into high-speed electric runabouts by combining advanced carbon construction with powerful motors and high-end, high-cost lithium batteries, boatbuilders on this side of the pond have now jumped in.

Earlier this year, nascent Zin Boats of Seattle was putting the finishing touches on the ZR2, a new 20‘ (6.1m) carbon runabout with a 360V Tor­qeedo Deep Blue 50i 1800 propulsion system for its debut at the Miami International Boat Show in mid-February.

Company founder Piotr Zin, 42, is no newcomer to boatbuilding. Holding a law degree, the native of Poland decided to pursue a different career after coming to the United States about two decades ago. He earned a design degree from the College for Creative Studies in Detroit, Michigan, and worked in various design roles for General Motors, BMW Designworks USA, Microsoft, and Brunswick Boat Group. As a keen racing sailor, he also imported Seascape performance boats (a 60% stake of the Slovenian brand was acquired by Groupe Bénéteau in 2018) to the U.S. West Coast.

Like other entrepreneurs in electric propulsion, Zin likes to refer to Tesla. And like Tesla CEO Elon Musk, Zin raised investment capital to fund his venture. But unlike Musk, he stayed away from drivetrain development and focused on the platform instead. Yet the automotive influence still looms large; the ZR2’s 40-kWh battery  is also used in BMW’s i3 electric car. Waterproof and shock resistant, it uses precisely assembled prismatic cells encased and housed in a stout frame.

Torqeedo rates its midrange system at 55.1-kW continuous input power and >32.4-kW propulsive power at 1,800 rpm. Peak input (i.e., to initiate planing) is 66 kW. Zin said he’d be more comfortable with a motor that could run between 2,200 rpm and 2,500 rpm, “but it’s physics. You only have so much battery power, and you can only push so much.”

Building a boat around a battery

The battery has its own automated built-in cooling system, with pump and heat exchanger separate from the electronics’ cooling circuit. Measuring  65.4“ x 38“ x 6.9“ (1,660mm x 964mm x 174mm) and weighing 612 lbs (278 kg), the battery forced Zin to design the boat around it. Standard equipment includes two Torqeedo 3.3A chargers with a 240V, 50-amp plug that can handle 110V or 220V. Charging from 10% to 100% capacity takes four to five hours, and topping off at 50 amps adds 20%–25% in about an hour, Zin estimated. Plugging in over “lunchtime buys you 20 miles of range.” To maintain longitudinal balance, which is critical to his performance goals, Zin moved motor and chargers forward of amidships using an Aquadrive CV joint and a thrust bearing screwed to the stringers to absorb the 550 lbs (2,400 N) of thrust. 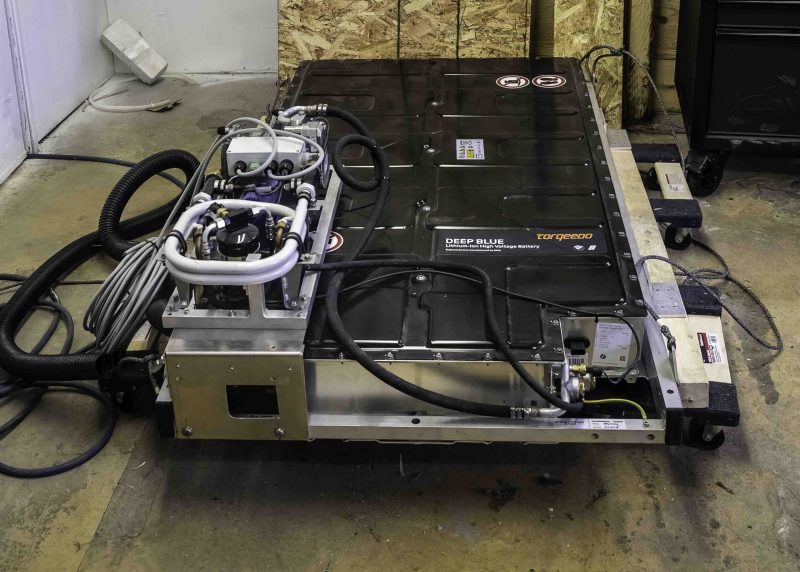 BMW’s marinized i3 battery with its cooling system and mounting bracket weighs more than 600 lbs (272.1 kg) and is housed in a supportive frame.

For additional help, Zin tapped into his network of boatbuilding experts. Ross Carmichael, a veteran boatbuilder at Brunswick, assisted with the running surface design. Despite being partial to deep-V hulls and their smooth performance in choppy water, Zin chose a general-purpose hullform with reverse chines and variable deadrise. He also put the ZR2 on a radical high-carbon diet: the hull weighs less than 350 lbs (159 kg)—little more than half the i3 battery’s weight, or the equivalent of an 80-hp four-cylinder outboard.

Zin outsourced hull construction to Turn Point Design in Port Townsend, Washington, the company of Brandon Davis, whom he met during the Race to Alaska in 2017. “We built a station mold with plywood skin that got covered in glass to make it suitable for infusion,” Davis explained. “It is stable, and the part released easily. Being careful, we can pull 20 copies from it.” Davis built the hull from Hexcel carbon skins infused with Pro-Set 114 epoxy over Divinycell H80 core. Infusion pressure was 28“ (71.1cm) mercury. “It’s a tight infusion, but I think it’s still overbuilt,” Davis said. All parts are laid up by hand and infused using the same materials but with different hardener speeds and laminate schedules. 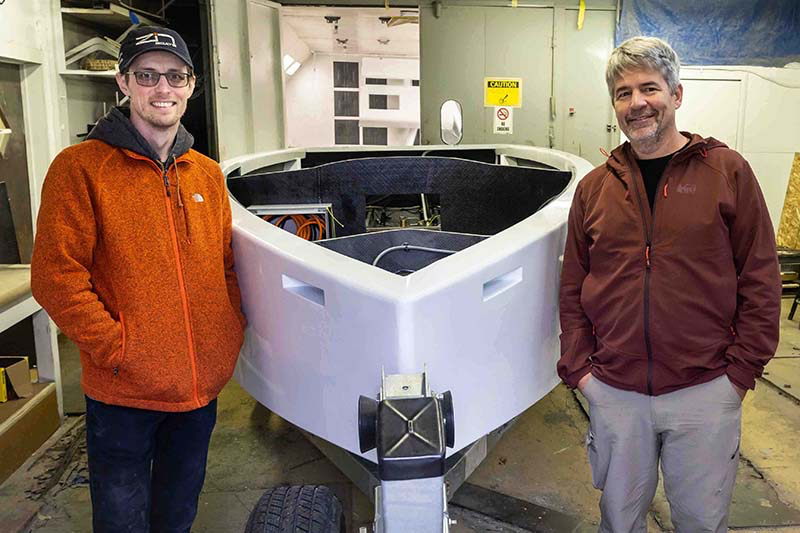 Corrosion protection is an important, complex topic for carbon fiber boats, but about those proprietary details Zin would only say that he “spent a lot of time and energy figuring this one out.” Everything is bonded and protected, he explained, and parts like the strut, the rudder, and the motor are insulated.

An electric runabout for upmarket clients

With a price tag of $250,000 (and up) with 50% down, the ZR2 is for an affluent clientele who covet a sleek, light, fast, quiet, and zero-emission 20‘ boat. “We target green lakes and potential customers who understand that electric is the way to go,” Zin outlined his marketing strategy. “We are looking for experienced boat owners, not first-timers. The boat is designed to be customizable. Want pink cleats? No problem. We’ll put on pink cleats.” 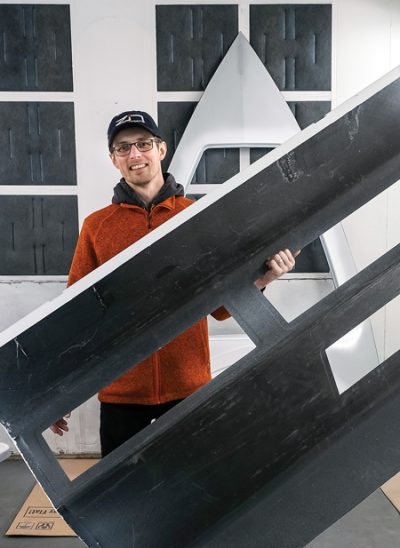 To offset this weight, Zin opted for a light carbon hull (<350 lbs/158.7 kg) and parts built by Turn Point Design.

Zin estimates he put 2,500 hours of his own time into this project. He gave us a quick tour of the prototype in his shop before he packed up to travel to the Miami show. The carbon hull with recessed LED nav lights in the bow was finished in a matte metallic silver Oracal vinyl-film wrap by Orafol. The cockpit sole is okoume plywood, covered in 2mm Oakwood veneer with a custom Awlwood finish. The bucket seats and the contoured bench with Morbern Marine vinyl seat covers are resistant to UV radiation and pinking from bacteria. The dash is devoid of gauges and switches, save for one that operates the bilge pump. All the instrumentation is combined into one column that runs from the dash down to the cockpit sole and includes a Fusion Apollo stereo system and a B&G Naviop digital switching control system.

He plans to offer three different models based on the same hull and propulsion system, starting with the runabout, which he considers “the four-door sedan of the boating world.” Later he wants to add a tender with a center console and an open bow for passenger seating, which he thinks could appeal to the superyacht segment, and a center-console fishing boat.

On his website, Zin lists potentials of 45 mph top speed and 100+ statute miles maximum range. In early tests on Seattle’s Lake Union, he said, “the prototype reached 40 mph with ease. The production boat will max [out] at 30 mph, [emphasizing] efficiency and range.”