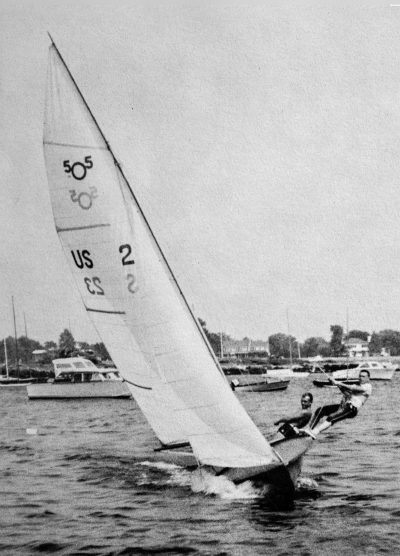 Crew out on the wire and a set of Dacron sails help the US 23 Windsong move along nicely with owner Gil Peterson at the helm in Larchmont, New York, sometime during the 1960s.

Larry Tuttle operates his Waterat workshop in La Selva Beach, California, on the property of the Monterey Bay Academy surrounded by acres of agriculture and a view of the Pacific Ocean. Fast-boat enthusiasts don’t mind the trek to see Tuttle, who once partnered with Mark Lindsay to build some of the world’s fastest 505s before moving to the West Coast, where he continued with the 505 dinghy but also made his mark with exquisite foils for racing boats of all sizes.

One brilliant Sunday last February, Tuttle threw open his doors to a small group of local sailing luminaries and this writer to show off US 23, the oldest and perhaps most original 505 dinghy in this country, a stark contrast to Tuttle’s high-tech boats. Built in 1954 in the United Kingdom, the 505 Windsong was the 23rd hull of this boat class, built by Fairey Marine, a division of Fairey Aviation, which manufactured WWII plywood reconnaissance planes difficult to detect by radar. Subsequently the company developed the hot-molding technique that was later used in boatbuilding. (For more, see “Fairey Marine,” Professional BoatBuilder No. 147, page 64.)

Windsong came to the U.S. as a gift to shipping magnate Henry Mercer, who also owned the Phil Rhodes–designed 12-Meter Weatherly. “That fall the boat competed in Yachting magazine’s third One-of-a-Kind Regatta at Riverside Yacht Club on Long Island Sound with Eric Olsen and Glenn Foster,” said Gil “Pete” Peterson, 77, a retired medical device executive, whose father bought the boat from Mercer. “They won the event on corrected time, with no time on the boat [before] and using an International 14 mainsail.” 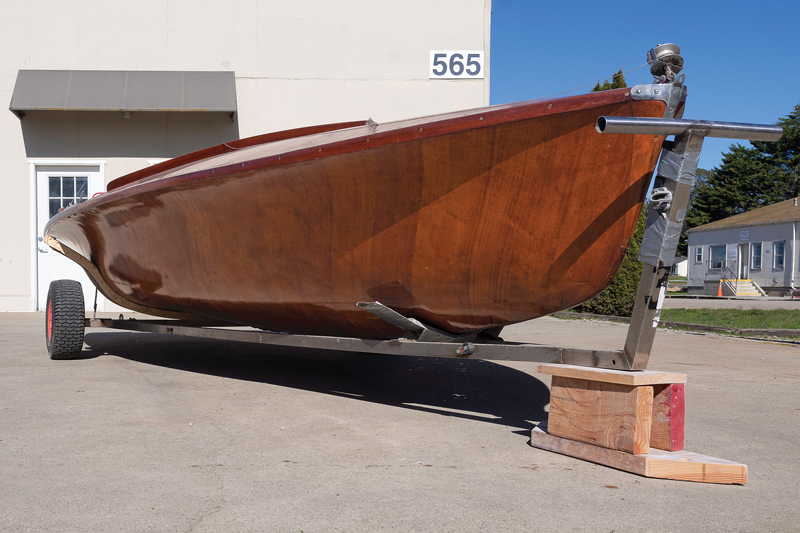 The weight and shape of Windsong’s varnished hull are remarkably close to those of her modern carbon fiber brethren, but the warm color of her mahogany hull lends a touch of vintage class.

Once we removed the cover in Tuttle’s shop, virtual time travel began. The hull shape was a 505 all right with its bespoke flat aft section, a stubby bow, arched foredeck and wide side decks that curved down to the cockpit sole doubling as flotation tanks. Everything looked and felt solid, but it had an austere beauty compared to modern 505s, which can intimidate and confuse with a bewildering number of adjustment lines.

A 505 Dinghy Once Was Simple 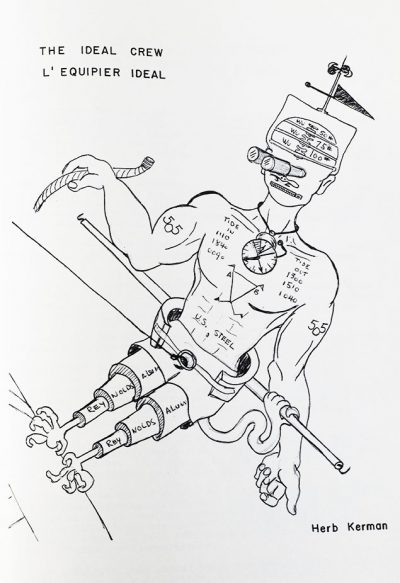 The California sun brought out US 23’s lustrous sheen of varnish and the color of the hull’s mahogany. The deck and sailing hardware was made up of vintage Tufnol turning blocks and Curry cleats, a rod-operated bronze mast jack, a bare-bones traveler and mainsheet block arrangement, and an above-deck jib furler. The white plastic cleat for the main and the golden Proctor aluminum spars won’t qualify as original, but the Ratsey & Lapthorn Egyptian cotton sail with the 1954 loft stamp certainly does.

The original plywood appendages had small bites out of their leading edges from collisions with floating debris. Both appeared significantly shorter, wider, and heavier than the carbon fiber boards and rudders coming out of Tuttle’s shop today. The original centerboard’s elliptical shape evoked the wing of a Spitfire fighter plane.

Credit for the 505 design goes to the Brit John Westell, who started with the Coronet, an 18‘ (5.48m) two-person dinghy—a handsome boat that stood out at the International Yacht Racing Union (IYRU) selection trials for an Olympic dinghy with trapeze at La Baule, France, in 1953. However, the IYRU took a pass on the Coronet, choosing the larger Flying Dutchman instead, which held Olympic class status from 1960 to 1992.

The French Caneton dinghy association asked Westell to shorten the Coronet’s hull to fit its size requirements. Obligingly, he removed 6“ (152.4mm) from the bow and about 1‘ (305mm) at the stern, making the boat not just shorter but also lighter, less expensive, and more maneuverable, powered by an upwind sail area of 150 sq ft (13.94m²), which eventually grew to 175 sq ft (16.26m²). Now 5.05m (16‘7“) long, the boat became the 505 and was immediately elevated to international status.

As one of the earliest 505 dinghies, US 23 is a specimen of this durable yet forward-looking two-person performance dinghy, which retained its key characteristics while keeping up with the times. The boats hold up and fetch good money on the used-boat market. Well-maintained and -campaigned older hulls can still win titles. “Let’s control what matters and open the rest to development,” Tuttle said. His comment summarized the class philosophy that over the years permitted not only fiberglass but also Kevlar, Nomex honeycomb cores, and carbon fiber/epoxy construction. “The best thing is the class is open to everyone who wants to come and race,” he added. 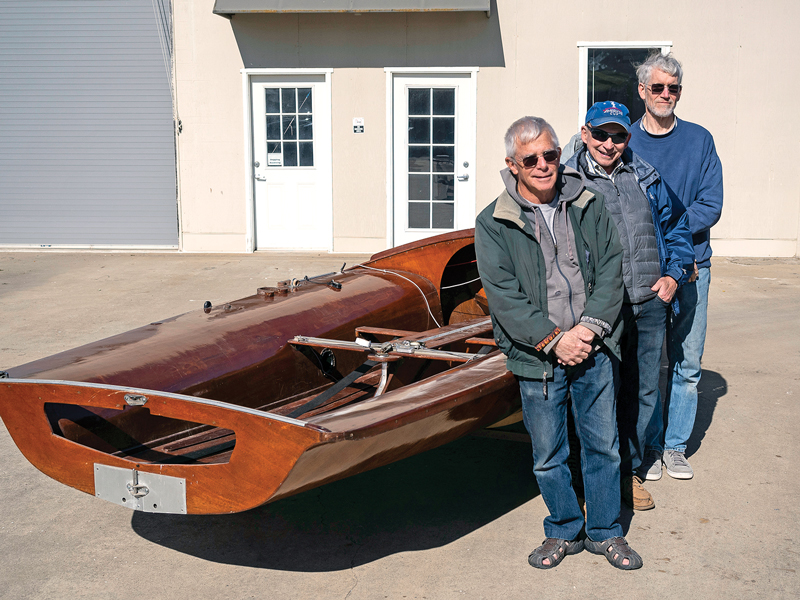 Relative nobodies can duke it out with top professional talent racing 505 dinghies, and while many other classes struggle with participation, the 505 still draws large fleets across Europe, Australia, and the U.S., currently the dominant nation, with four boats in the top five at the 2019 World Championships. That includes winners Mike Martin and Adam Lowry, who repeated their 2016 success. Both also received the 2019 Rolex Yachtsman of the Year award. The most recent 505 world championship in Fremantle, Australia, was Martin’s fourth title (once as a crew) and 11th podium finish. Check out the 505 Wiki page with lists of the medalists at the Worlds, including an impressive number of U.S. sailors. 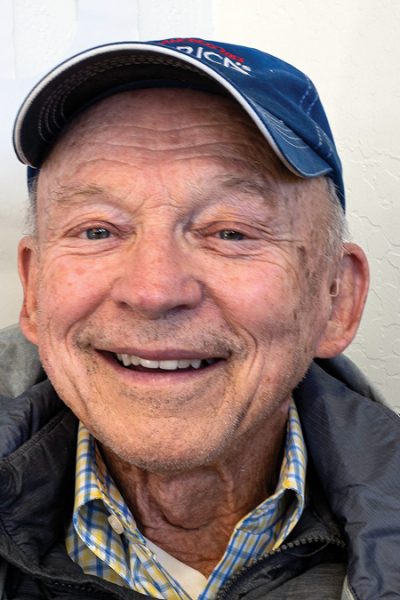 Owner Peterson sailed US 23 most of his life, beginning in the late 1950s when his father responded to a newspaper ad from Mercer, who’d kept the boat in a garage on his estate in Rumson, New Jersey. “My first sensation? Wow, it’s like flying—so responsive, so light, so powerful,” Peterson remembered. “You take off from the dock, and it’s like a rush.” The family sailed Windsong on Twin Lakes, their summer vacation spot in Pennsylvania, but later Peterson moved the boat to the Larchmont Yacht Club, where he joined a budding East Coast fleet.

As a class secretary he participated in the 1963 World Championship at his home club. The French, the Brits, and a Dane named Paul Elvstrom were the ones to beat at the time, with Americans Henry Shefter and John Marshall in the mix. But two unknown Australians, Brian Price and Chris Hough, stole the show and made a lasting impression starting with the practice race.

“On the first beat, they were mid-fleet, but at the windward mark they took off on a broad reach,” Peterson said. “Nobody followed, so they went on a flyer by themselves while the rest turned dead downwind.” At the bottom of the course, the Aussies had done a horizon job on the fleet. They kept doing this to great effect, winning the Worlds and “singlehandedly changing the way we sailed this boat downwind,” Peterson said. The 505 tried to win Olympic status, but the class eventually gave up, a smart move that ensured control of its destiny. Said Peterson: “We were not successful, and in hindsight, this would have been a bad idea.”

When Peterson moved again, this time to the San Francisco Bay Area, Windsong moved, too. She was becoming an antique, but he kept her in trim and close to original condition, sailing for fun and with his grandchildren. “We downsized and lost garage space, so now I’m looking for a new permanent home where US 23 is appreciated,” he explained standing in the glaring sun and gusty northerly breeze outside Tuttle’s shop with Paul Tara, another 505 veteran, who facilitated this impromptu meeting and still sails in the competitive Santa Cruz fleet. “It’s the oldest 505 dinghy in the country and one of the oldest in the world, perhaps something for a museum,” Peterson mused, adding, “I don’t want it to become a bar for Mike Martin.”