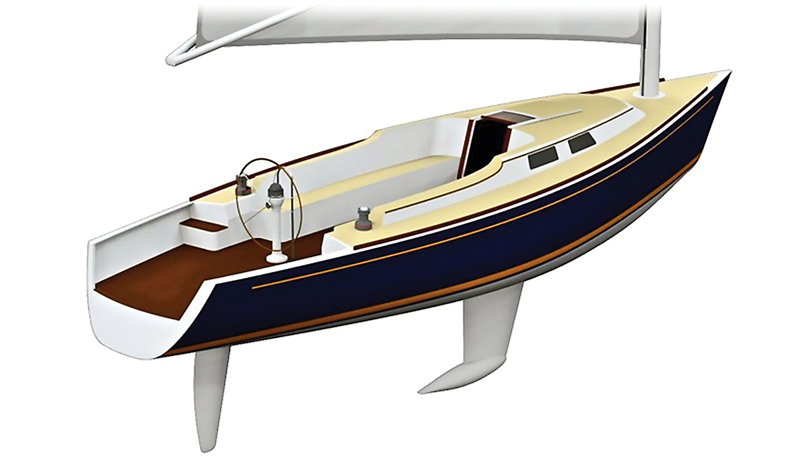 The Wyliecat 40 aims at the future of the recreational sailing market, which could well see a surge in multi-purpose boats

California designer Tom Wylie, 73 (PBB Nos. 75 and 152), can look back on a long line of seminal boats from his drafting table. Among them are successful ocean racers like American Express (the boat Norton Smith sailed to win the 1979 Mini Transat) and Ocean Planet (Bruce Schwab’s Vendée Globe racer), potent bluewater cruisers like Roxanne, Jade, and Convergence, the private yacht of West Marine founder Randy Repass, and the iconic Wylie Wabbit, a pocket-sized trailer yacht with trapeze. In the recreational market, he’s best known for the eponymous Wyliecat, a series of cat-rigged sloops and ketches with unstayed carbon masts and wishbone booms. These slender and unpretentious boats range from 17‘ to 66‘ (5.18m to 20.11m) and charmed judges with their simplicity and zippy performance, winning two Boat-of-the-Year awards.

I recently caught up with Wylie, whose mental acuity and elo­quence are as sharp as ever. He still prefers to work with time-honored tools like ducks and splines, so when he promises to send plans, there will be a thud when the UPS driver drops the package at the door.

Things are not as hectic while his business partner, builder Dave Wahle, recovers from a hip replacement, but there is a new boat sitting in their Watsonville, California, shop. It’s called the Wyliecat 40, a distillate of Wylie’s ideas for a future where boats will be shared by many rather than owned and operated by one.

A cursory look would mistake the new boat for a Wyliecat 39 like Warwick Tompkins’s custom cruising yacht Flash Girl. But a close inspection of the numbers and drawings reveals that the 40 traded the aft cabin for a large, open cockpit and garage space under the work deck. “It’s a spec boat,” Wylie said. “I wanted it to be versatile, fit for the corporate and the charter markets and for sharing among parties who have different use profiles.” He thinks this concept has enough inherent flexibility to work as a daysailer, as a charter boat for groups of a dozen-plus, or as a sustainably powered corporate yacht to take staff and clients out on the water for a head-clearing spin. Wylie’s sustainability vision puts the 40 to work in marine science, for instance at his nonprofit Ocean Planet Explorers, thus following the example of a much larger Wyliecat 65 (19.8m), the Derek M. Baylis, which earned her stripes doing research trips for the Monterey Bay Aquarium (see “Wylie’s Way,” PBB No. 165, page 70). 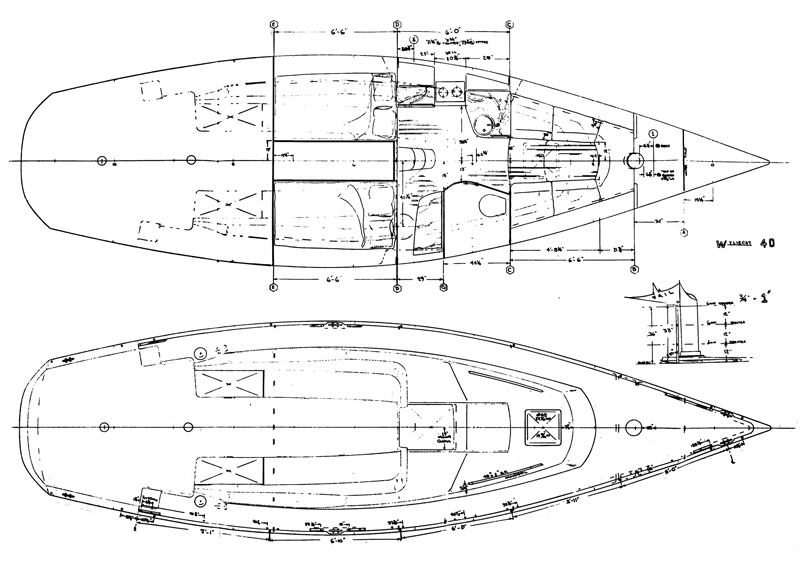 Large cockpit, modest accommodations and a simple sail plan: That always was and still is the Wylie Way.

To shape the hull of the new model, Wylie and Wahle, as consummate recyclers and reusers, altered the mold of the 39. It was industrial-strength surgery, cutting it open down the centerline 16‘ (4.87m) and using a wedge to pry apart the two halves at the transom by 13“ (33cm). The result is a hull with more beam aft, up to 2“ (51mm) more freeboard and headroom, and a steeper raked stem that adds 14“ (35.6cm) of waterline.

Compared to the 39, this model has a shorter coach roof and an inverted layout. “We put the salon and the [convertible] settees into the bow and installed two 6‘6“ [1.98m] quarter berths on either side of the engine box,” Wylie noted. “The 6‘ [1.82m] galley to port is a good size for a 40-footer, and we also have an enclosed head with a 25-gal [94.6-l] holding tank.” With the mast up in the bow, there was flexibility for this arrangement, bringing the companionway forward by about 4‘ (1.2m) and centering the weight of the engine to better balance the boat with the weight of passengers and/or cargo.

Wylie was never eager to follow the mainstream and design a boat around technology that might make some aspects of sailing more convenient while also adding complexity and cost. With this 40-footer he continues his concept of simple boats that perform well, are cost-effective to operate, and easy to maintain.