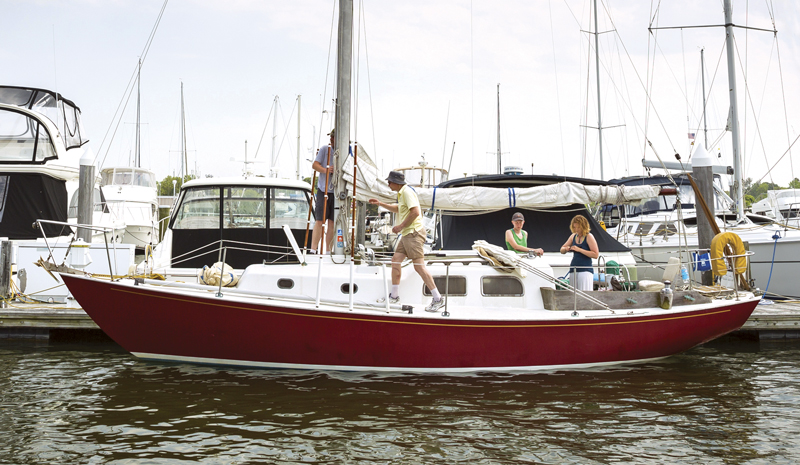 Despite some leaks and rotten core, Contessa, a 1962 Pearson Vanguard, measuring 32’6″ (9.9m) LOA, is still giving good service to a family on Chesapeake Bay.

A few years ago, a friend wanted to enter his 1960s-era Luders 33 in the Marion–Bermuda race, but a surveyor, without citing any specific shortcoming, declined to stamp it. “These things don’t last forever,” he said. My friend went anyway, unofficially, and had a safe passage to and from.

Those of us in the industry, surveyors in particular, have knowledge of how they fail—mostly from neglect. The systems go first, followed by exposed wood trim, core materials, and lastly the matrix of resin and glass fibers, which degrade more quickly when not protected by gelcoat or paint from rain and sun.

But with proper maintenance, what is the life expectancy of a well-made boat? Peter Hickok is the fourth owner of the first Pearson Vanguard, d.o.b. 1962, the third being his mother, who purchased Contessa in 1967 after her husband, Peter’s father, died. Hickok says she figured it might keep her boys out of trouble. He has maintained Contessa ever since, with no plans to part ways, and so has made considerable investment.

Hickok wrote to us: “The deck–hull joint is, I think, the weakest design aspect of the Vanguard, or at least the prototype: It always leaked. With limited time to sail, I decided, with some misgivings about appearance, to replace the wooden toerail with aluminum similar to that used on other production boats at the time. This eliminated the time required to varnish the toerail, and provided a means to put netting completely around the boat when the kids were little. Unfortunately, after a while the leaks came back and were causing problems with the deck core. About 10 years ago I bit the bullet and had the toerail removed and the joint fiberglassed. At the same time, I had the deck repaired. Needless to say, very expensive, but given that I plan to keep the boat long-term, absolutely worth the money. Last summer I had the cockpit sole and a portion of the port deck fiberglass repaired. Otherwise the glass is in pretty good shape.”

Of course Hickok has made many other upgrades over the years but beyond painting the boat twice with Awlgrip and replacing the wood rudder with one of stainless steel, few involving the basic structure of Con­tessa. The Atomic Four gasoline auxiliary was replaced with a Westerbeke diesel 20 years ago, and he now is researching electric power. Sails and electronics have come and gone. The portlight lenses are foggy, and the berth cushions show wear. But overall, Hickok regards his 58-year-old beauty as a perfectly suitable and safe cruiser for his time on the Chesapeake Bay and forays up and down the East Coast. After all, Contessa has long standing as a member of his multi-generational family.