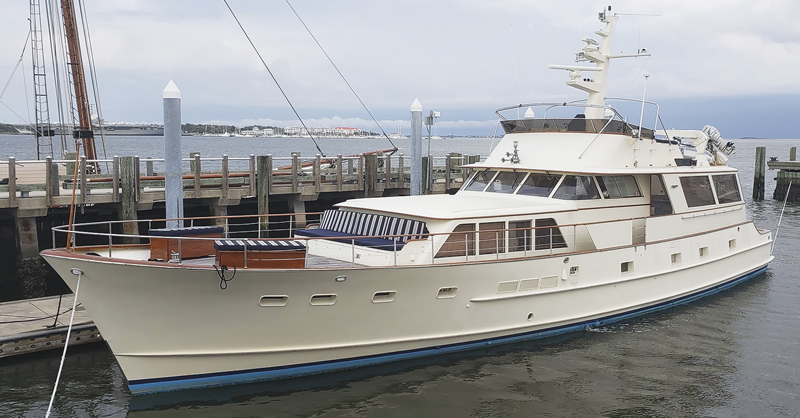 The RV Manta, a 1971-vintage 80′ (24.38m) Burger motoryacht, was donated to the Marine Science and Nautical Training Academy.

Quirky marine toilets are a reliable source of wonder and potty humor during onboard cocktail banter, but they’re a lot less amusing if you’re the master, mate, or mechanic charged with installing and caring for them. The best insurance against your marine sanitation system becoming the butt of any jokes is proper maintenance, design, and installation. Upgrading the plumbing and sanitation system with a Sanicubic 1 macerator pump for improved reliability and performance was on the work list of Rusty Day, president of the Marine Science and Nautical Training Academy (MANTA), in Charleston, South Carolina, a nonprofit that trains marine science students. The organization’s flagship—the RV Manta, a donated 1971, 80‘ (24.38m) Burger motoryacht—was recently refit, including upgrades for multi-day research trips for a crew of at least 16 people.

The boat has four toilets equipped with a pneumatic flush system. A 60-psi air compressor and a 40-psi water pump transported the effluent into a black-water tank 6‘ (1.83m) above the waste lines. This exceeded the system’s specifications, which allowed for a maximum elevation of 18“ (45.72cm). “The vertical lift required because of the relative heights of the heads and the black-water tank was problematic,” Day said. “This manifested itself with backflow and clogs. You could see this history of underperforming at numerous places where the hard-PVC sewage pipe had been cut out, unclogged, and patched. And a number of check valves were installed to deal with the backflow to the toilet. Not good—especially for our high-volume needs.” 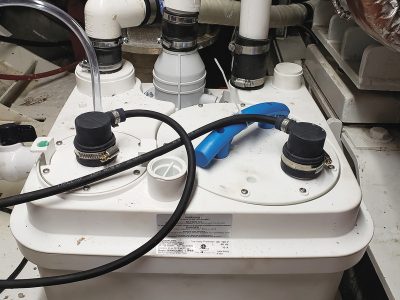 Day researched other options, including the 120V Sanicubic 1 macerator pump, sold in the U.S. since 2012, mostly for residential applications. “I wouldn’t consider this a regular marine toilet system,” said Jose C. Pachas, U.S. technical manager at Saniflo, the pump’s manufacturer. “This is the compact lift station that will handle the wastewater from many marine toilets and that would grind and pump the waste from these fixtures into the black-water tank.” Full disclosure: After Day sent Saniflo the prospectus of his program and talked to them about the technical side of his plumbing issues, the company decided to get on board as a corporate sponsor by donating a Sanicubic 1 system, valued at approximately $3,000.

“It is powerful, capable of something ridiculous like 30–40‘ [9.14m–12.19m] of vertical lift,” Day replied when I asked about the most useful benefits for his application. “It is 100% self-contained, sealed from releasing odors, and ready to put into service. I also like the multiple ports and options for plumbing into it, the alarm features, and the durability of the macerator. I have another macerator that evacuates the black-water tank, but it’s great to know the sewage has already gone through this heavy-duty processing to ease the chances of the secondary encountering problems.”

The installation took one workday for Day and two boat-maintenance workers and required only minor surgery, because the four existing heads were kept in place. The 1.5“ (3.81cm) sewage pipe fit the input ports of the Sanicubic 1 with some resizing. Day cut the four toilets’ PVC hard pipes leading to the black-water tank and rerouted them to the Sanicubic unit, using a combination of PVC pipe, marine sanitation hose, and standard plumbing connections, rubber hose, clamps, and hard pipe. 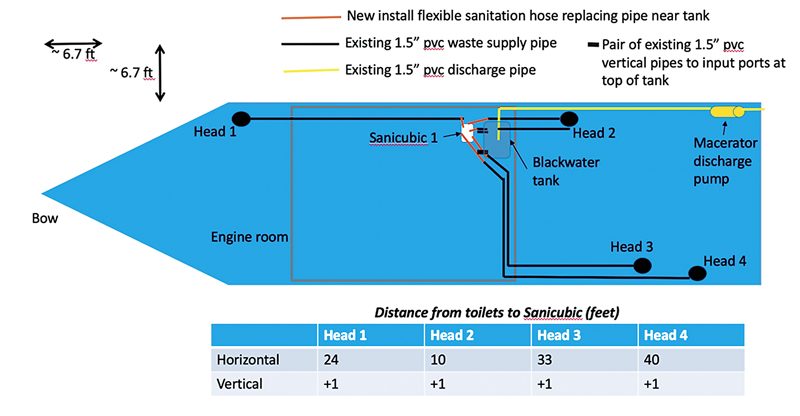 A diagram of the sanitation system aboard the RV Manta indicates locations of the Sanicubic 1 and the black-water tank amidships.

“All of the necessary fittings were included. I also had to run the vent pipe from the top of the Sanicubic 1 to an exhaust chimney in the engineroom using marine sanitation hose,” Day added. He asked Saniflo for answers to technical questions like vent requirements or whether air bursts entering the Sanicubic tank would be okay with the pressure switch that activates the discharge pump when the tank is filled to capacity. “The low inlets on the pump were needed in this application,” Pachas explained. “Its ‘plug-and-play’ feature was a plus for the owner, being very easy to service if needed.”

The wiring was simple because RV Manta, which carries 32-kW and 50-kW Northern Light generators, already had a 120V circuit with an outlet 2‘ (61cm) away on the engineroom wall. “The circuit…already had a breaker that was adequate,” Day said about the electrical system. “The only thing I discovered is that if there is a power interruption (for example, while switching from shore power to generator), you need to hit the start button again on the Sanicubic 1 to put it back into operate mode.” 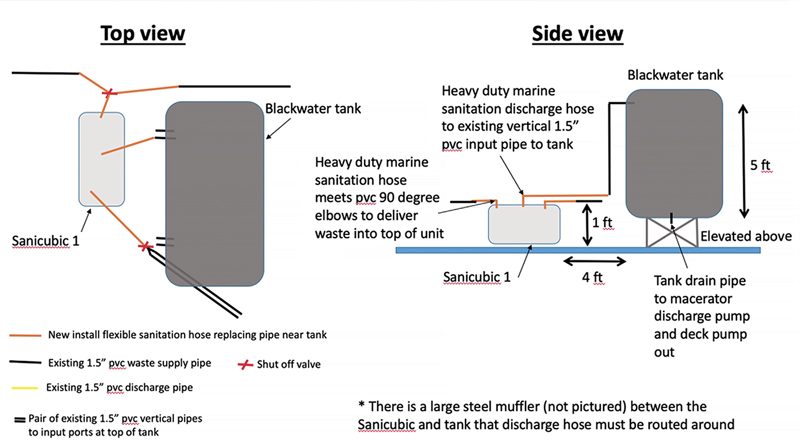 This schematic illustrates more details of the installation, including the 5′ (1.5m) vertical differential between the discharge port of the Sanicubic 1 and the intake of the holding tank.

Because the Sanicubic 1 was not explicitly designed for marine use, I asked about ruggedness and saltwater resistance. “It is a durable construction as far as the case and fittings go. I don’t anticipate any problems there,” Day noted. “My heads are freshwater flush, so saltwater isn’t a problem. The harshest part of the environment where it is installed will probably be the heat. It’s fairly close to the main engine and muffler, so we’ll see how that does.”

After six months of continuous use, there were no problems, Day said. “The 6‘ lift only requires a burst of 2–3 seconds, so I expect to get a lot of life out of the system. I’m pretty impressed with the unit and feel it’s bulletproof and, frankly, overengineered for my application. Which is exactly the peace of mind I want when it comes to my heads.”