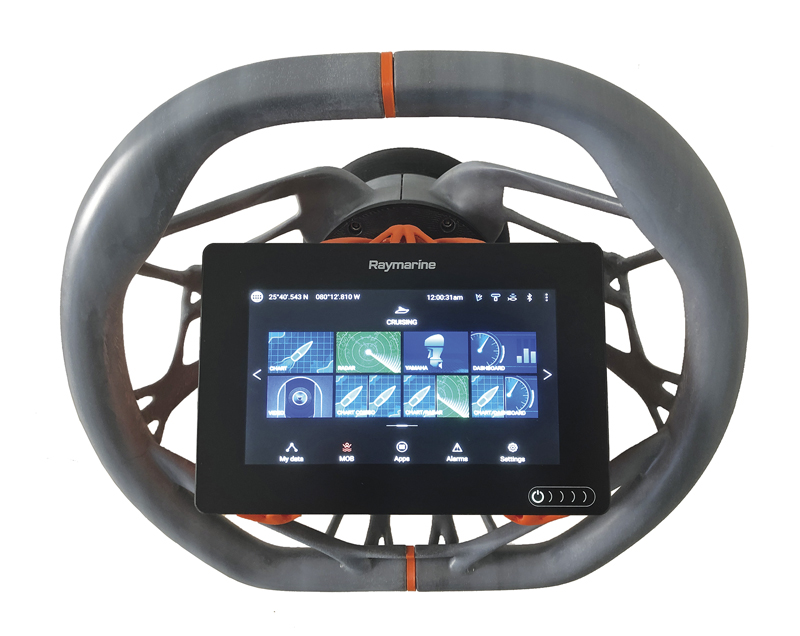 Paolo Nazzaro, co-founder of Superfici in La Spezia, Italy, impressed last year’s IBEX attendees with his profound knowledge of 3D print technology for marine applications. After reconfiguring his company to help out with manufacturing personal protective equipment (PPE) during the coronavirus pandemic, which hit Italy hard in early 2020, Nazzaro submitted an intriguing new steering wheel design called the Smart-Wheel. It features an integrated multifunction display (MFD) at the center. Working with Raymarine, Nazzaro and his colleagues Federico Salvatori, the wheel’s designer, Davide Telleschi, and Guido Zannoni took a fresh look at all the steps of the process and decided that radical change was the best way forward.

First, they used a new approach to 3D modeling, called generative design, an iterative process that in his words “completely changes the classic CAD method [by] providing multiple lightweight outputs and giving the designer the chance to choose the best model from different alternatives.” While a traditional creative process typically sees one designer developing one idea with often-limited computational capacity, generative design uses cloud computing to produce several different alternatives simultaneously. The setup is different, because in addition to conventional dimensional limitations, physical constraints and forces need to be considered to develop a better product.

“In the case of the steering wheel, the new design will be lighter and stronger, thanks to the algorithm, which produces unexpected shapes and links between each constraint,” Nazzaro explained. “For this project, we used Autodesk Fusion 360 and its algorithm. It is based on a mono-cellular organism called Physarum polycephalum, which can develop the most efficient and energy-saving way to [access life-sustaining] nutriments. This ability and its application in the design world fascinated us, especially because now designs are getting closer to a more natural shape than ever.”

Inspired by Automotive and Aerospace

The Superfici steering wheel also drew inspiration from the aeronautic and automotive fields (e.g., the Formula One race car steering wheels), which are looking for lightweight solutions while putting controls at the operator’s fingertips. Nazzaro says his firm wants to study how those technologies could change marine design, e.g., by influencing weight and planing characteristics of small boats. The Italians also want to expose users to different shapes and tactile experiences, influenced by Volkswagen’s Type 20 concept van, an odd creature that outwardly looks like a vintage 1962 VW van but packs a lot of cool technology under the hood: a 10-kWh battery and an electric motor that produces the equivalent of 120 hp and 173 lb-ft of torque, plus biometric identification and a built-in digital assistant.

For production, Superfici’s engineers settled on 3D printing, because they understand the process well and because it allowed them to easily produce the necessary shapes and undercuts. The 3D filaments they use as printing material now have better mechanical characteristics, “so it also was the most convenient solution,” Nazzaro said. Superfici explores a host of other production technologies as well, including continuous filament fabrication (CFF), selective laser sintering (SLS), and metal printing.

The goal was to design a device that unifies all the various inputs (radar, sonar, GPS, and enhanced entertainment systems) and merge them into a smaller object like a steering wheel, which always has been the primary mechanical interface between operator and vehicle. The rationale was simplification, as more instruments are being placed on boats and wirelessly connected to a touch-screen display in the cockpit; that ideally also offers a path to the integration of the so-called Internet of Things (IoT), which is moving aboard many boats already. To combine the mechanical interface (the 3D-printed steering wheel) with an electronic one (the MFD), Superfici chose the Raymarine Axiom 7 MFD.

Besides fulfilling the quest for convenience, how could a smart steering wheel make boating better? “Having a lightweight and space-saving solution is important, especially if we are considering small boats,” Nazzaro replied. “Leaving some extra space shared between different areas and uses, the deck plan can be completely changed. This brings about a new, more ecological yacht design concept. For instance, a lightweight boat can improve the performances of an electric motor.” And more efficient boats with fewer emissions are less damaging to the environment.

Finally, to print out the prototype of their smart wheel, Nazzaro said the team chose ABS Pro filament, an enhanced chemical solution for easier printing and having better mechanical characteristics than standard ABS—less warp, better interlayer adhesion, reliable bed adhesion (to glass, tape, and other adhesives), better strength and aesthetics, and high-temperature resistance up to 97°C (206.6°F). Default deposit speed was 60mm (2.36“) per second with 15% infill (smaller elements are filled), and five perimeters. Among the parameters in Autodesk Fusion 360, the overhang angle function was particularly valuable, as it makes the model friendly for 3D printing, minimizing time and material.

As of this writing, Superfici said the firm is working on a preliminary design for a new vessel that will include the Smart-Wheel.