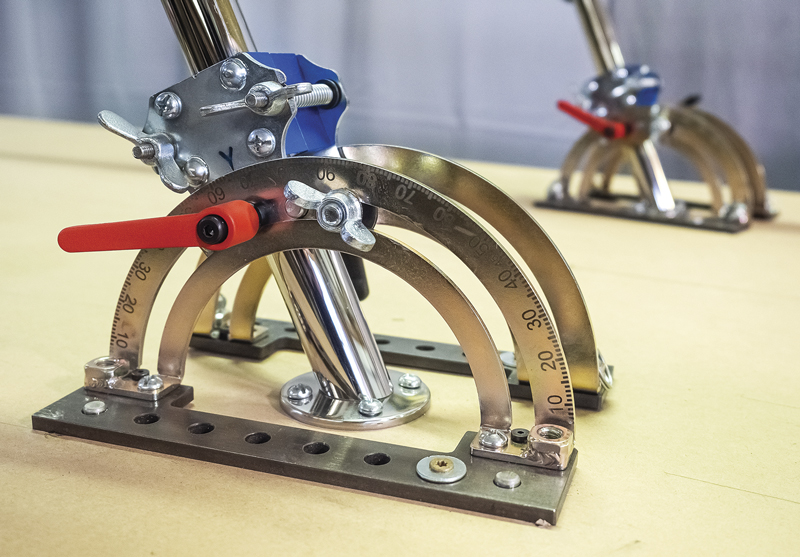 The Angle-Rite clamp, a sophisticated blend of protractor and third-hand tool (employed here on a bow pulpit assembly), helps stainless-steel fabricators save time while improving precision.

To get it straight, start with a curve. That, in a nutshell, is Tim Uecker’s pitch for the Angle-Rite clamping system he invented and patented. It’s a plain yet sophisticated fabrication tool to simplify and speed up welding stainless-steel tubes for stanchions, pulpits, pushpits, and handrails. Watching Uecker demonstrate, even the uninitiated spectator gets it: The clamp prestresses the tube to compensate for weld distortion, so the end result is perfectly straight (or with the intended curvature) and angled correctly. “When you weld tubes, you can’t clamp them down flat on a table but have to prebend them the other way,” he explained. “Round tubes are especially tricky. They tend to rotate, and they can fall off. It can be quite frustrating and time-consuming.”

The soft-spoken crafts­man and innovator graduated from the University of Wisconsin with a degree in zoology and a love for boats before moving to the West Coast, where he studied welding. Since 2004 he and his brother Todd have been at the helm of Cape George Marine Works in Port Town­send, Washington, building and servicing the upscale Cape George Cutters. Uecker also runs Meridian Stainless, his own firm that produces custom marine hardware and this nifty clamping system. 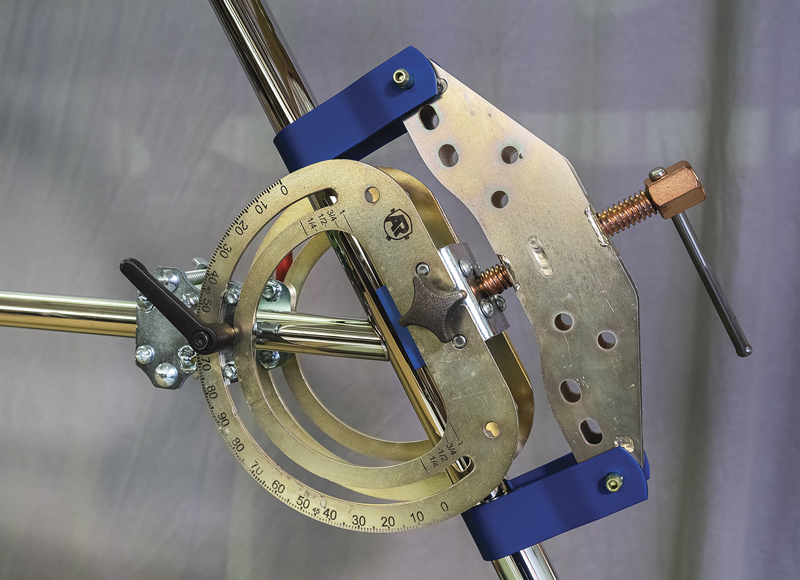 The day I stopped by for a demonstration, he’d set up a pulpit he was about to weld as a replacement for the original on a magnificent 45‘ (13.7m) cutter damaged during a docking maneuver. The piece was fully assembled but held together entirely by several Angle-Rite clamps.

A Fusion of Tools

Loosely speaking, Angle-Rite is a refined fusion of a third-hand tool and an industrial-strength protractor specifically designed for fabricators. The primary clamp has two slings and a spindle-operated pressure pad to prestress the tube at the point of the weld. The amount of prebend, Uecker explained, depends on factors such as tube diameter, wall thickness, amount of weld metal, and heat. “If weld parameters are consistent, this setup can be faithfully reproduced,” he said. The secondary clamp with the angle guide holds the intersecting tube that gets notched or meter-cut. Notching requires precision, but the Angle-Rite system takes out the guesswork by locking in the desired angle, length, and rotation. Then the intersecting tube gets advanced to and cut at the 0° line that also doubles as the 0° mark and corresponds to the outermost part of the intersected tube held in the primary clamp. The 0° mark is also the bottom of the notch or the cut line. 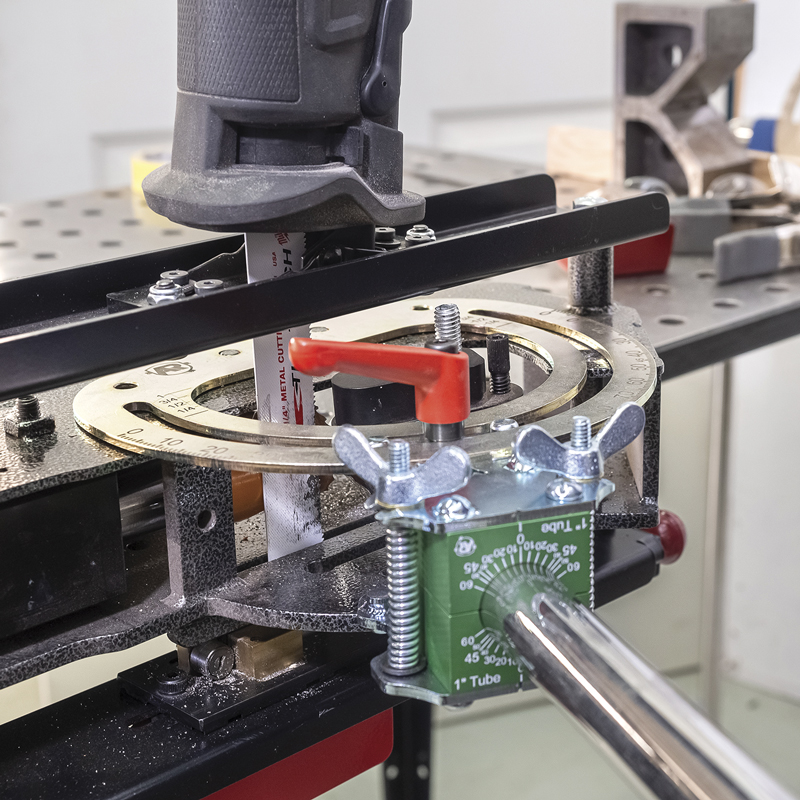 The clamp is available with different dies and attachments for notching or cutting.

After cutting or notching, the secondary clamp is reattached to the primary one. Next, the spindle is adjusted to apply the right amount of prestress for distortion control, and then it’s time to fire up the torch. Uecker never fiddled with alignments or approximated cutting marks. The end result was a clean and precise cut, a prerequisite for a clean, good-looking weld. 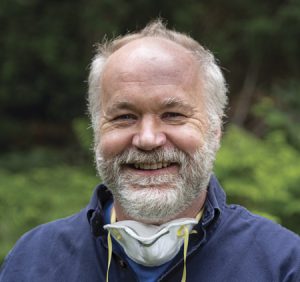 Right—Engineer and innovator Tim Uecker moved from the Midwest to Seattle, switching from zoology to welding, and founded Meridian Stainless in Port Townsend.

“Time savings and precision go up while waste goes down,” Uecker said. “You need consistency for accurate weld [joints], and the clamp helps you reproduce every setup with precision.” He estimates the Angle-Rite system can save fabricators “more than 50% of time” spent on fitting and fabrication, sometimes even more. Another important detail: The system makes it possible to do the fitting on board a boat, disassemble the work to take it off site if necessary for safety or convenience, and exactly reassemble it back at the shop for welding. The clamps also simplify jigging up complex structures, thus eliminating time and effort spent cutting and grinding tack welds.

“Stainless-steel work has to be precise and aesthetically pleasing, because it is highly visible on every boat,” Uecker said after demonstrating how to start with a curve to come out with a straight piece. Seeing his work on the Cape George cutters and other boats in Port Townsend’s marinas and boatyards suggests the man and his clamps are as good as his word.

Angle-Rite clamps and dies come in different sizes for tubes ¾“–2“ in diameter (19mm–51mm). Pricing starts at $679 for the #3 clamp. Accessories include angle/length gauge, miter/notcher, or abrasive notcher. Interchangeable slings and dies make it possible to mix and match tubes of different diameters.