Foiling is fun and very efficient way of moving boats at high speed with less fuel. Over the past few decades it has graduated from a niche application for military or racing craft to making inroads in the recreational and commercial markets. These days the International Hydrofoil Society, (IHS), a tireless promoter and champion of this technology, celebrates its 50th anniversary with a series of virtual talks by the world’s foremost experts on this topic. If you ever wonder what makes boats “fly” and what this means for the future of boatbuilding and design, there is much to be learned in the coming weeks until the conclusion of the program on November 19.

The event kicks off Tuesday, Oct. 20 at 7 p.m. U.S. Eastern time (4 p.m. Pacific, 10 a.m. Eastern Australia) with opening remarks and an introduction by IHS President Ray Vellinga and the keynote 50 Years of Foiling by Neil Baird of Baird Maritime, followed by Our Work with Foils—From Skiffs to America’s Cup Yachts by Paul Bieker of Bieker Boats, LLC in Anacortes, Wash., whose contributions to this field are frequently featured in Professional Boatbuilder. The lineup of speakers also includes Harry Larsen, who proves that even a vintage 1980s Bayliner can learn to fly, see video below.

Find further details in the schedule below or check the IHS’s corresponding Facebook page. These sessions will be conducted on Zoom and can be followed via this public link. If it doesn’t open automatically, use Meeting ID: 315 723 1248 and Password: r09YST.

Schedule Note: Presentations identified with * have, or are planned to have, an associated pre-recorded video presentation uploaded to the IHS YouTube Hydrofoil Channel. These will not be replayed during the live sessions and as such, the audience is requested to view these in advance of the Q&A sessions or panel discussions. Other presentations will be live only, but recorded for future uploading. 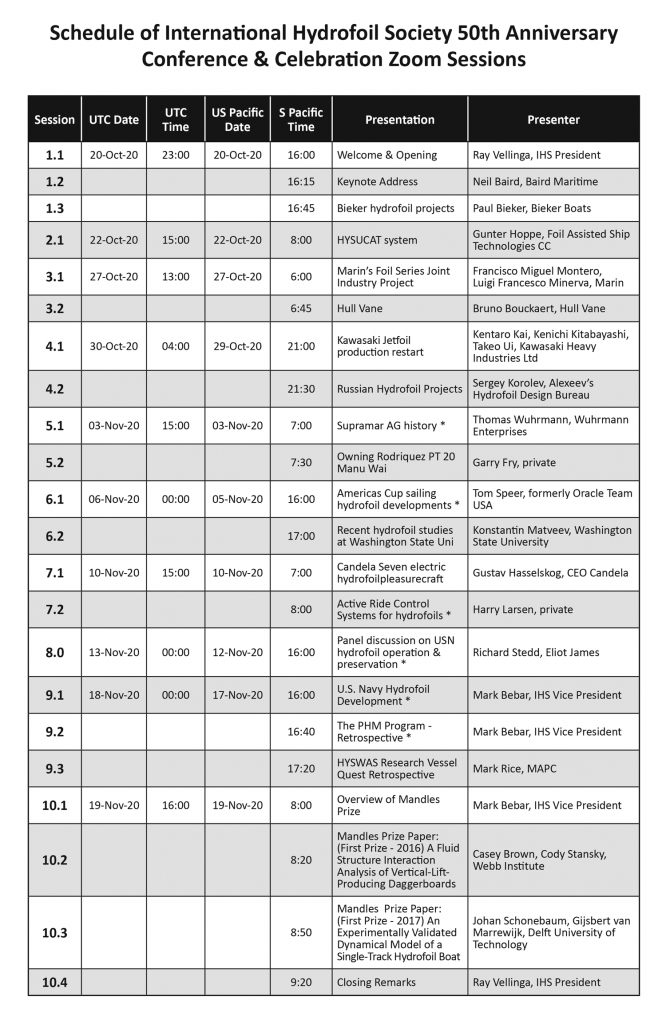