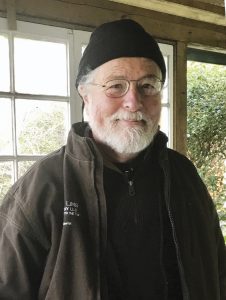 Brion Toss practiced, wrote about, and taught the art and craft of rigging from his homeport of Port Townsend,Washington.

Master rigger Brion Toss, 69, died June 6, 2020, in Port Townsend, Washington, after a few months’ illness. The news from his family arrived as softly as a Northwest mist: “Last night as Venus departed from its intimate planetary visit, our beloved Brion Toss, surrounded by his loving family, caught a peaceful ride on the glorious tide of a Strawberry Rose Full Moon.”

Toss spent much of his life aloft, rigging everything from small sloops to massive square-riggers. But he was also a master wit, so good with words that the boisterously funny National Public Radio game show “Says You,” which he supplied with regular bon mots, held a tribute to him over the Father’s Day weekend.

Anyone who knew Toss knew how to find him in a crowd: just wait a few minutes until that booming beacon of a laugh rang out, and head for it.

Sailmaker Carol Hasse, who has been his friend for decades, said, “We came of age during the disillusionments of the Vietnam War era, and Brion took that break in time, a break in the established recommended path of a life, to find something else. Instead of looking for how he could make the most money and acquire the things we were all told we needed to acquire, whether it was homes or cars or besting the Joneses, he followed a heart-path.”

She continued, “His teachings, books, and videos were not just the obvious gifts to anyone who learned from them, or just gifts to the craft of rigging and the self-sufficiency of sailors, they were a shout-out to the world. They enhanced all of our collective marine trades’ reputation and brought renown to Port Townsend. They put us on the map in a way that showed this place really honors craft and the value of work for the sake of what it can bring to the world instead of what it can bring to us individually.”

A Lifelong Fascination with Knots 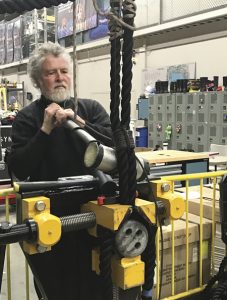 Toss works on a deadeye seizing for the Columbia Rediviva, a replica of the 18th-century sailing ship inspiring the name of the Northwest’s largest river.

Toss had a lifelong fascination with good knots, not just for their utility, symmetry, or strength but also for the sheer joy of their mathematical complexity. You could walk into his shop and find him at work or at play (sometimes it was hard to tell which), and he’d beckon you over to marvel with him at the sheer precision of a properly made piece of rigging, or to analyze how and why one had broken. And then he might play you a tune on his marimbas, or his flute, or hand you a drum.

He turned his vast knowledge of working loads and breaking strengths of wire and cordage into poetic meditations, like the stories in his book Falling, and in the often hilarious text in his magnificent book The Rigger’s Apprentice, now a classic and required reading on every sailor’s shelf. Most of all, his reverence for the traditions of the craft of rigging and its importance to the safety and well-being of sailors and others, as exemplified in his “Rig Your Boat” workshops, has made a potentially dangerous activity far safer, and thousands of sailors more self-sufficient.

Hasse added, “Aside from the memories of travel and adventure and collaborating on projects like bending sail on a beautiful Alden schooner, we always shared a passion for the language of sail, a desire to keep it accurate, and to follow in its etymology, like where did the word shroud come from.” 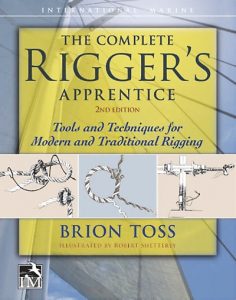 Toss could come down to your small sailboat and tie a good luck knot for your voyage, or he could completely rerig ships of any size (the U.S. Coast Guard used his seminars), and his famously accessible explanations made sure everyone understood. He was as interested in sailing newbies as he was in circumnavigators. A woman who barely knew him wrote that in one of his seminars at Strictly Sail in Oakland, California, she was in the back of a roomful of men whose snarky comments about “little girls with little boats” were shut right down by Toss as he moved her to the front of the room. Years later when she visited him at his shop, he remembered her and gave her a tour and a discount on splicing equipment. “I’ve never forgotten his kindness to a newbie boat owner at my first boat show,” she said. “He was such a brilliant and kind man.”

Toss’s humor was irrepressible, and he delighted in creating puzzles for his readers, with names like Winch Whinge, Name That Detune, and The Pirate’s Dilemma. With much hilarity he helped my husband and me write our wedding vows, in a little ditty we called The Book of Getting Spliced.

Hasse said, “One of Brion’s great gifts in addition to his overwhelming kindness, generosity, and brilliant humor was his positivity and discipline in the face of challenges. He had a black belt in Aikido, did you know that? Aikido was part of the trajectory and the balance of his life. He knew adversity, but he knew how to deflect it. You could always count on him.”

As a friend, Brion was generous to a fault. One winter when he was traveling, he let us use his shop for a few weeks in exchange for feeding the cat—we brought in our mast and were able to completely rerig it for our transpacific voyage while winter weather raged outside.

Brion once signed my copy of The Rigger’s Apprentice with a subtle reference to the Clock of the Long Now, a clock buried deep in a mountain whose chime sounds will not repeat themselves in 10,000 years. That’s a perfect analogy for who Brion was, and how he lived his extraordinary life.

Because of COVID-19, there will be no public ceremony. To see the virtual memorial with photos, audio, and video, visit his website and the memorial page on Facebook.

Karen Sullivan is a Port Townsend-based writer and poet who’s also a former ship captain, marine biologist, and spokesperson for a federal agency. In 2012 she and her husband Jim Heumann sailed their Dana 24, Sockdolager, from Port Townsend to New Zealand.