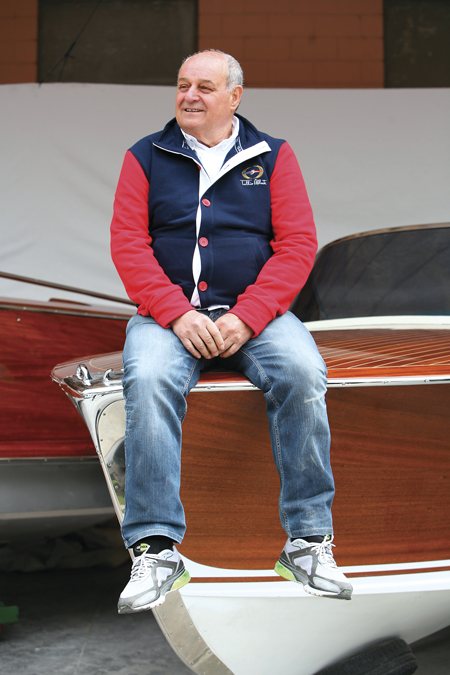 The scene was filmed somewhere in the Mediterranean, off the French coast. A speedboat bearing the signature “Tullio Abbate” and the name Mister Nicolas on the hull was running on calm waters in sunshine and being chased by a low-flying helicopter. A man of athletic build standing on the right skid of the aircraft jumped down onto the sunpad and took control of the boat, gun in hand.

These moments of cinematic action were emblematic of Belmondo as well as Abbate—his passions and his career as a boatbuilder. He loved speed and risk, racing ultrafast offshore boats (nicknamed “Ferraris of the seas”); and his loyal clientele of friends, celebrities, and demanding connoisseurs, including several Formula One drivers, admired Abbate’s inspiring character. Indeed, Mister Nicolas, an Abbate Offshore Model 36 (10.97m), was loaned to the film’s producer by Formula One world champion Alain Prost, who named the boat for his son Nicolas.

The Yard on Lake Como

With his trademark prolixity and quick humor, Abbate made light of the powers of seduction: “With the sound of my boats, I was able to enchant [the famous conductor] Herbert von Karajan as well as [the soccer star] Diego Maradona.” Some even compared Abbate to Enzo Ferrari, the legendary and enigmatic boss of the iconic Italian race and sports car company. But the modest and even-tempered boatbuilder, who often flashed a broad smile and enjoyed the company of good friends, found that comparison too bold.

Born on July 14, 1944, Abbate was the eldest son of Guido Abbate in a family of boatbuilders who settled on the shores of Lake Como. Guido, who in 1946 received the first gold medal from the Italian Powerboating Federation, was his mentor and inspiration. Guido’s small but fast Pamblo proto­type was one of the first successful runabouts driven by a surface propeller. 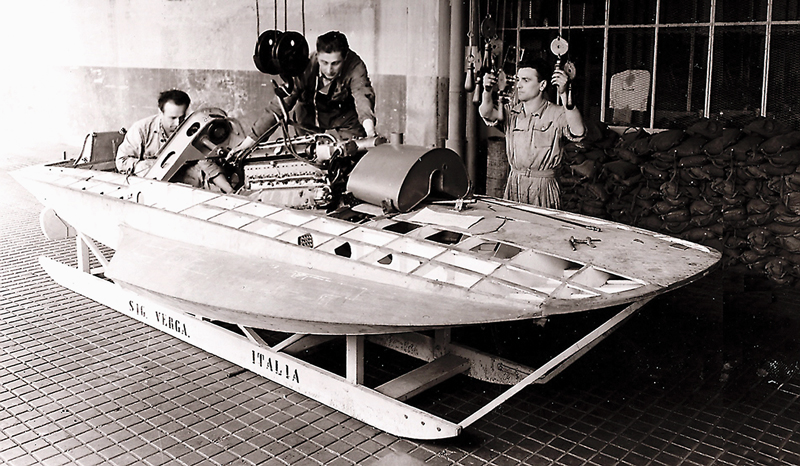 laura 1 , a world speed record boat, is prepared at the Alfa Romeo racing department in 1952. The three-point wooden hull helped build the legend of Abbate boats.

When Guido welcomed important visitors at his yard in Tremezzo where the lake bifurcates, Tullio took note. If you stopped by in the early 1950s, it was a good bet you’d meet engineers like Giulio Alfieri, the future boss of Maserati, or Mario Verga, the famous speedboat champion who clocked a world speed record in 1953 at the wheel of an Abbate hull powered by the same engine as Juan Manuel Fangio’s Alfa Romeo Formula One race car.

With great passion and on all bodies of water, Tullio Abbate lived the important evolutionary steps of speedboating in the second half of the 20th century: refined wooden boat construction, speed records with three- and then four-point hulls, deep-V hulls, catamarans, outboard and inboard power, the growth of offshore racing, building prototypes for rich patrons, sprint or endurance wins, the advent of fiberglass, the endless quest for more engine power, the marinization of Lamborghini, Ferrari, and Porsche power plants, as well as series boat production. The list could go on. 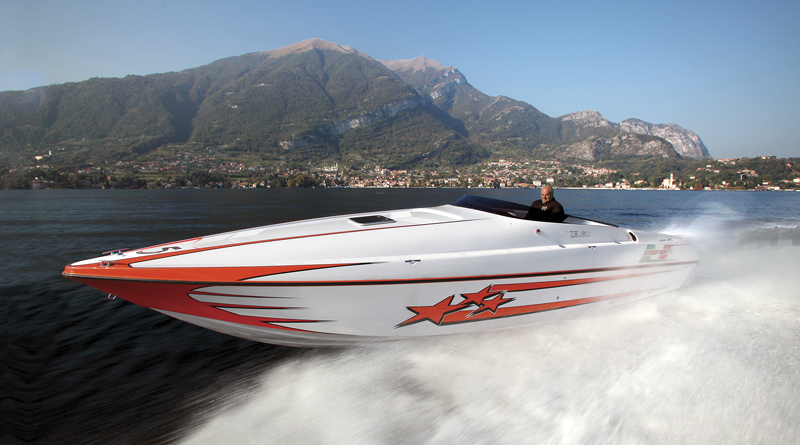 At the age of 16, Abbate won the European Championship in Cannes in 1960 as a copilot: “My father created [boats like a] Stradivarius in mahogany, about 15 a year, at most. He was the genius of the family,” he once paid tribute to Guido.

Abbate was in France in the early 1960s when he had the revelation of a lifetime: “It came like a miraculous ap­parition. I was attending the Six Hours of Paris [race] and I saw a small deep-V-hull boat, rather ugly and, even worse, in fiberglass.” From that moment on, the young man knew what he wanted to do, but his father did not want to hear about fiberglass at home. Disappointed but determined, Abbate started building plastic boats from scratch on his own. The rest is history, with more than 250 wins and a long list of world records, the last clocked at more than 223 kmh (138.6 mph) average in 1997.

Whether he was at the wheel of his boats or not, the logo with his signature and the laurels became not just a prestigious brand but a symbol for victory, always associated with number 5, the first racing number assigned to him by the Motor Boating Federation. In 1963, he painted it on the first racing boat he designed and built and raced to victory in the famous Cento Miglia del Lario on Lake Como, Italy, at the age of 19. From then on, he always kept faith in that number’s good luck. 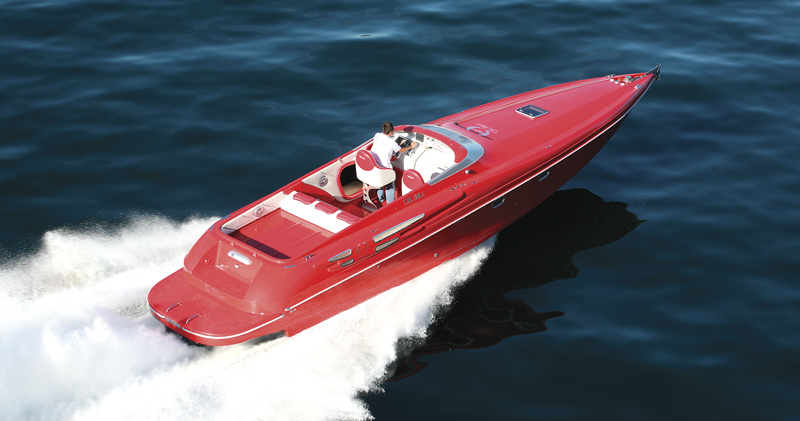 The Mito 45 (13.65m), one of Abbate’s flagships, combines speed, power (gasoline or diesel), and safety in a timeless design.

After Guido retired in 1975, Abbate took over the yard and soon expanded it considerably. By the mid-1980s, he delivered 250 boats to customers each year, sometimes even more, depending on the world economy. He did not mind hard work and had the ability to rise to challenges. Commercial success came in the early 1980s with the Sea Star series, one of his original and timeless designs. Restyled several times, many versions of Sea Stars still remained as fresh as ever, like a nautical version of the Porsche 911 sports car. At the same time, Abbate released his first offshore models, which eventually included the popular Mito range. Collaborating with the leading automobile designer Giorgietto Giugiaro, Abbate also launched several projects up to 80‘ (24.38m) in length.

Abbate always loved visiting Monaco and the French Riviera for some last-minute tweaks on a customer’s boat, often assisted by capable local technicians and Abbate rep Maurice Marth, who was based in Grimaud, a mile from the Gulf of Saint Tropez. Without their help, the fans of high-speed boats would have been in a pickle if mechanical problems arose, especially on weekends. “Tullio was incredibly hands-on and enthusiastic, always ready to solve a problem,” Marth said. “An Abbate is a boat of pure pleasure, and Tullio loved to please people, above all.”

Awarded the highest national sporting distinction alongside powerboating legends Theo Rossi di Montelera and Fabio Buzzi—the latter died in an accident in September 2019—Abbate was immortalized as an Italian powerboat legend. Already Tullio Jr. has taken the torch, dedicated to carrying on the Abbate legacy. His victory in the 2019 world endurance championships happened around his father’s 75th birthday, just nine months before the elder Abbate died, on April 9, 2020.

About the Author: PBB correspondent and nautical historian Gérald Guétat, pursued his passion for speed on the water starting as a deckhand on tall ships and crossing the Atlantic several times. He raced a Starboat and initiated the first French challenge in the Little America’s Cup. His chronicles of power- boat racing history include two books on the Riva dynasty.