The newly launched Wheeler 38 (12m) Legend under way in Brooklin, Maine, is a dimensionally accurate modern interpretation of the 1934-vintage Pilar, the Wheeler Playmate Ernest Hemingway had customized to satisfy his sportfishing habit.

When we write about classic boats, successful yards, and legendary naval architects, it’s easy to overuse the word iconic. But in the recent revival of the Wheeler Yacht Company with its launching of an updated version of a very special 1934 Playmate model built this past year by Brooklin Boat Yard, the adjective accurately applies to nearly every defining element of the project.

Let’s start with Ernest Hemingway (iconic enough?), whose custom 38‘ (12m) Wheeler Playmate, Pilar, the new boat is modeled after. The father of a distinct modern American narrative style was also an early innovator of big-game fishing as a sport, and Pilar was by many accounts the first boat fitted with a helm station atop the pilothouse for the purpose of fishing. She was built with a longer cockpit than was standard, a 12“ (305mm) cut-down of the topsides aft, and was later fitted with a fighting chair and a roller across the top of the transom to facilitate landing large fish. Like any good boat, Pilar was also a source of inspiration and escape for her famous owner, who fished her from Key West and later from his home in Cuba, where the original boat is installed today in a static onshore exhibit at the Ernest Hemingway Museum. 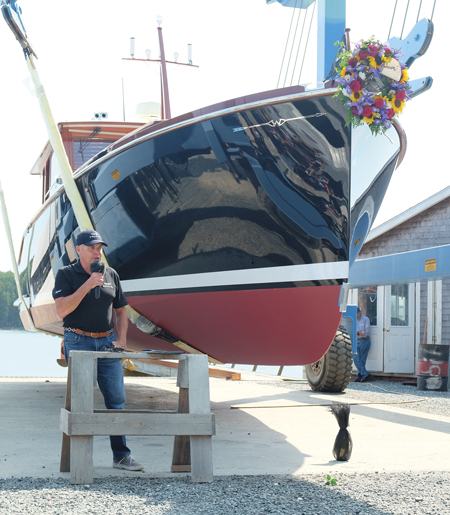 During the launching at Brooklin Boat Yard, Wes Wheeler, great-grandson of the original Wheeler company founder Howard Wheeler, announced the rebirth of the Wheeler Yacht Company.

That’s where Wes Wheeler, great-grandson of Wheeler Yachts founder Howard Wheeler, and Hemingway’s niece Hillary Hemingway took detailed measurements off the old hull in preparation for a planned movie about the author and sportsman’s friendship with his Cuban captain, Gregorio Fuentes. The movie hasn’t come to fruition yet, but the planning and detailed preparation spurred Wes Wheeler to have a dimensionally accurate replica of Pilar built, and simultaneously revive the Wheeler Yacht Company.

At the launching in Brooklin, Maine, last September, Wheeler delivered a brief history of the historic company from its founding as a storage yard in 1910 through multiple yard sites and incarnations: the busy years of both world wars when thousands of employees built submarine chasers, minesweepers, and tugs; the development of popular sedan cruisers and other pleasure boats; the final shuttering of the company in 1965 after building in excess of 3,500 vessels; and his own renewed interest in the Wheeler brand around 2004.

Bringing the family company back to life has “all been drawings and promises until now,” Wes Wheeler said, standing in front of the new Wheeler 38, Legend—the manifestation of the new start he envisaged for the Wheeler brand. 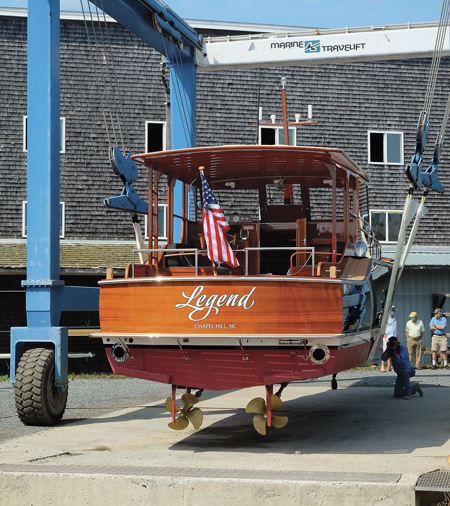 Legend’s hullform differs from the original Pilar by the addition of hard chines and the absence of a skeg. Design and engineering of the new boat was from Bill Prince Yacht Design.

While the new boat quotes the dimensions of the original Pilar almost perfectly, Legend looks anything but old. Constructed at Brooklin Boat Yard, the 38 is a virtuoso performance from a skilled crew led by Eric Stockinger. Her gloss black hull and varnished mahogany pilothouse and cockpit coaming were flawless for launching day. But those bottle-smooth topsides reveal the modern truth of her construction. While the hull is wood, it’s cold-molded wood-epoxy: multiple layers of mahogany plywood bonded with epoxy resin and vacuum-bagged over Douglas-fir stringers and frames. It’s far stiffer than the original Pilar’s plank-on-frame construction of white cedar on Philippine mahogany. Naval architect Bill Prince said that’s appropriate for the new boat, which runs at 32 knots compared to the original’s 16 knots WOT.

Prince stepped into the job five years ago after naval architect Bruce Marek had replicated the hull lines and developed some scantlings for Wheeler based on records and measurements taken from the original Pilar (a fire in 1963 destroyed many of the company’s records and original drawings). 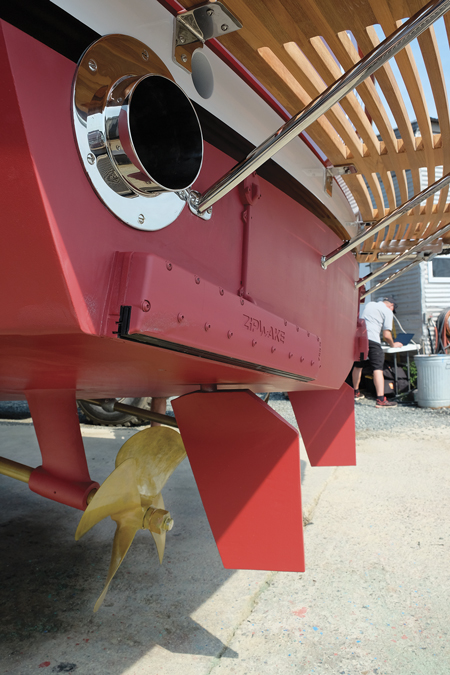 Prince applied FEA to Marek’s scantlings, tweaked them, and, with higher speeds in mind, made some minor changes to the hull shape, adding hard chines and removing the skeg. Adding a bit of stability and planing ability, the chines are really just the continuation of the hull and bottom surfaces to meet at a sharp edge, Prince said. “The running surface isn’t much different.” But with twin 370-hp (278-kW) Yanmar diesels driving twin four-bladed props and trim adjusted through Zipwake dynamic interceptors, Legend’s handling is unquestionably a departure from Pilar, which, according to Hemingway correspondence, was powered by a single 75-hp (56-kW) Chrysler. Prince and Stockinger both marveled at the capacity of the hull to accommodate the two big diesels, a generator, and extensive modern systems, including two 12,000-Btu air-conditioning units and a Seakeeper gyro stabilizer.

The appointments belowdecks are sumptuous compared to the spartan accommodations of a 1934 Wheeler. Prince said he had a design vision of a Hemingwayesque space with wood paneling, club chairs, a book, a cigar, and a glass of whiskey, and that’s the ambience the crew at Brooklin created. It’s tempting to call it iconic.